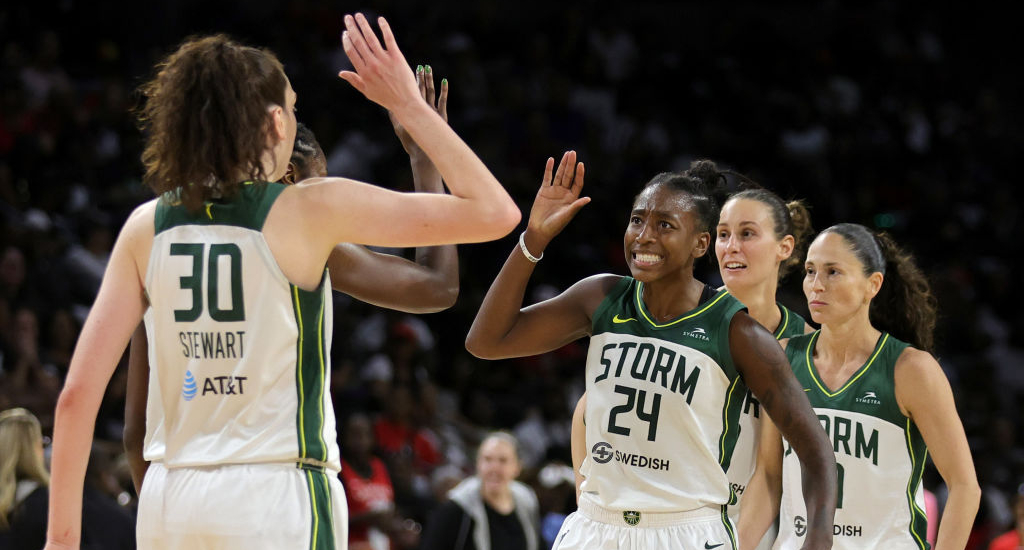 When the WNBA Playoff bracket was set, the second round matchup everyone wanted to see was the Seattle Storm against the Las Vegas Aces and on Sunday we got our wish as those two teams delivered a thrilling Game 1 that saw the Storm swipe homecourt from Vegas with a 76-73 win on the road.

Early on it was all Seattle as they jumped out to a 13-4 lead in the first quarter, swarming the Aces with their defensive length and activity, while Jewell Loyd and Breanna Stewart would get things going on the other end.

Both teams would go through a rough patch in the middle of the quarter, combining to miss 14 consecutive shot attempts, but Seattle took an 11-point lead into the second quarter. Stewie would continue her dominance in the second quarter, as she led the way early for the Storm as they were able to keep the Aces at arm’s length for much of the first half.

While A’ja Wilson struggled with some foul trouble and a Kelsey Plum got off to a rocky shooting start, it was Chelsea Gray that kept the Aces in it, as she went to work creating tough bucket after tough bucket, matching Stewart in that regard in a very fun sequence to end the half that saw Vegas trim the lead to seven.

The Aces continued to pull closer in the third quarter, as Plum started to find her rhythm to help Gray out, as they cut another four points off the lead to make it a three-point game going to the fourth.

In the fourth, the Aces would start to see the three-ball fall and it felt like they might’ve taken the best punch from the Storm and would possibly pull away. After a Plum three cut the deficit to a single-possession, Riquna Williams knocked down a corner three to give the Aces their first lead of the afternoon in the mid-fourth quarter.

As the Storm started to send extra help at Stewart, the Storm needed someone else to step up and turned to Loyd, who led them down the stretch with some incredible shot-making, dueling with Gray in a sensational back-and-forth to close the game, culminating in what became the game-winner with a stepback to push Seattle ahead by three.

That three was preceded by an incredible defensive play by Tina Charles, slapping the ball off of Plum’s leg out of bounds as she circled under the basket to ensure the Aces didn’t get a shot at taking the lead back. Plum would get a pair of clean looks at a three to tie, but it just was not her game from deep as she missed both as part of a 2-for-10 afternoon from three-point range, despite scoring 20 points.

It felt like a game the Storm had to win given how well they played early, as losing that game would’ve been deflating considering what a sensational defensive effort they put forth. Stewart was incredible with 25 points and six rebounds, while Loyd’s fourth quarter run pushed her to the high-point mark of the game with 26 on the afternoon. Sue Bird had 12 assists (and no turnovers) as she orchestrated everything per usual, with Tina Charles dominating on the glass with 18 rebounds to go along with 13 points.

For the Aces, Gray was terrific with 21 points and five assists, but otherwise they struggled to find good offense. Plum had 20 points but needed 23 shot attempts to get there, and Wilson scuffled to just eight points (and 12 rebounds) on 3-of-10 shooting. They will have to figure out how to get their frontcourt going in Game 2, as they were simply out played in those spots by the Storm, but also knock down their threes as they were just 6-of-23 from deep in the opener.