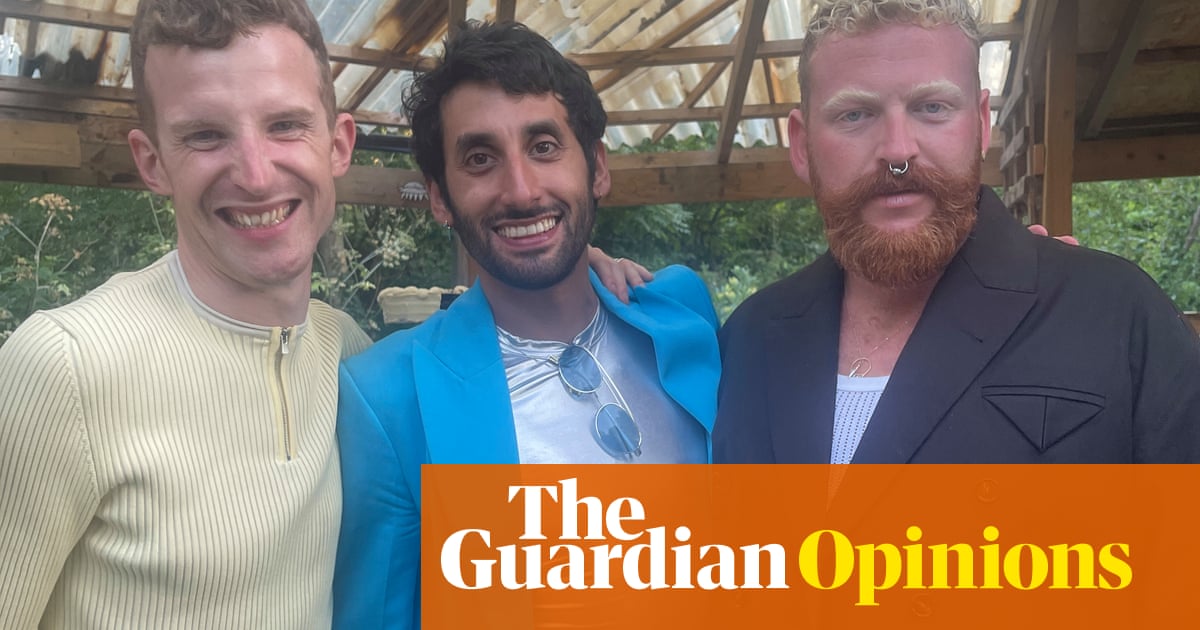 This summer, I was given the job of marrying my two best friends. We all became close through a drag troupe we started at university and now, here they were: my two drag sisters, my unconditional queer siblings, two of my favourite people in the world, marrying each other after years of unrequited love, unadulterated passion and many trying circumstances – and I had the mammoth responsibility of conducting the ceremony. Having been deeply sceptical about marriage for years – and single my entire adult life – I was dubious about whether I could do the job justice.

As young queers at university, we had followed the fashionable discourse about how marriage was a “heteronormative construct that shackles us all” and how, as gay people, we were liberated from such arcane traditions, following our own path of true autonomy and forming relationships outside the Hallmark romance framework that has brainwashed the world. The three of us spent our 20s getting into as much trouble as we could: playing drag gigs in the middle of the countryside to hostile crowds, performing sets on the most obscure stages at Glastonbury while inebriated beyond belief, and generally dedicating our lives to drag, queer friendship and the pursuit of creativity. We believed our queerness was a gift – a kind of prophecy that allowed us to bypass the desires that trapped so many other people.

Of course, none of this thinking was original. For decades, the gay community has been wrestling with the question of marriage: should we be fighting to assimilate into such a homogeneous institution, or should we be celebrating relationships on our own political terms? The fear from some factions is that aspiring to marriage might dull the more anti-institutional tenets of what it means to be queer. In my younger years, I lived in these abstract polemics, believing them to be paramount to my identity and life. But then I found myself, at 32, conducting a wedding for my two best Judys (friends) in a not untraditional ceremony. And, in truth, it felt like the most radical act of all. Screw the polemics.

For religious and cultural reasons, I was raised to believe that, in identifying as queer, my very being was a carnal aberration and that the world saw me as defective. I was told this many times, by teachers, relatives, religious instructors – I was once told by a family member that my sexuality made me “impossible to love”. This remains the reality for many queer people, whether or not they are told so in such extreme terms. We live in a world that continually punishes us for who we are and, as a result, queer relationships can be extraordinarily tricky – there’s so much trauma circulating, and navigating through it can be a huge task. So to watch two queer people I love dearly come out the other side, promising to love each other for the rest of their lives, felt victorious. It is always a triumph when queer people who have been taught to hate themselves finally believe they deserve another’s love. It was one of the most hopeful days I’ve ever experienced.

Globally, it feels as if we are slipping backwards in relation to LGBTQ+ rights. Anti-trans legislation is gathering support at alarming speed in the US. Florida’s “don’t say gay” law bans all mention of sexuality in schools and the supreme court, having annihilated bodily autonomy for women and pregnant people, seems poised to eviscerate gay rights. The UK, too, has seen trans people conscripted into a horrifying culture war (see the Tory leadership race), with hate crimes against LGBTQ+ people escalating in recent years. In this precarious time, a queer love so powerful that it brings hundreds of people together in a field to witness and honour it deserves not only a ceremony but a defiant parade. I know it was supposed to be the happiest day of my friends’ lives, but it was also the best day of mine.