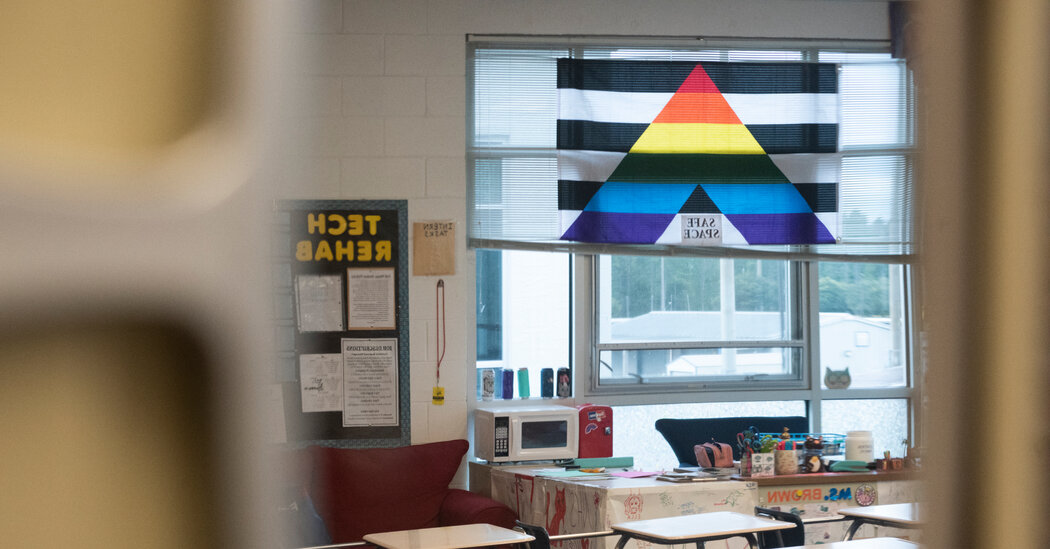 Erin Brown, a teacher in St. Johns County, Fla., typically keeps a gay pride flag hanging up in her classroom. As the faculty sponsor of a Gay-Straight Alliance club at her high school, she wants her students to know they are safe with her.

But this year, Ms. Brown found herself quietly repurposing the flag.

No longer on full display, it now hangs as a “rainbow background,” partially obscured among posters, photos, a calendar and other trinkets on her class bulletin board.

The change is emblematic of the fear, uncertainty and confusion many educators in Florida say they are feeling this school year, as new laws take effect restricting teaching on gender identity, sexual orientation and race and expanding the oversight of books.

Gov. Ron DeSantis, who has championed the laws, argues that public schools should focus on teaching core academics, not on pushing a liberal ideology, and that parents have the right to know what is being taught in the classroom.

“Our school system is for educating kids, not indoctrinating kids,” he said last month at a conference for Moms for Liberty, a parent group that has become a powerful force in school politics.

The changes come with significant stakes for school districts, which may be sued over violations to the law focusing on L.G.B.T.Q. identity. Within the first few weeks of school, teachers in some parts of the state have been asked to take down stickers showing support for L.G.B.T.Q. students, to review every book on their classroom shelves and, in at least one case, to remove rainbow colored paper from a classroom door after the decorations prompted a complaint from a parent, according to interviews with teachers, union officials and advocates for gay rights across Florida.

“It feels treacherous,” Ms. Brown said of the new legislation. She rearranged her pride flag because, like other educators, she said she was erring on the side of caution this year.

Nationwide this year, state lawmakers have introduced at least 137 bills seeking to restrict teaching on topics such as race, gender, L.G.B.T.Q. issues and American history, up from 54 last year, according to a report by PEN America, a free speech group. The bills, which overwhelmingly focused on K-12 schools and were sponsored almost exclusively by Republican lawmakers, most commonly addressed race. But an increasing number — 23 bills, up from five last year — focused on L.G.B.T.Q. issues, PEN America found.

“It’s opening a second front on public education,” said Jeremy C. Young, a lead author on the report, which identified seven bills that became law, including two in Florida. “Accusing public education of indoctrinating students on the basis of race, and then making the same accusation that they are indoctrinating them with L.G.B.T.Q. propaganda.”

On Being Transgender in America

Nowhere is that more visible than Florida, where Governor DeSantis has made issues surrounding the teaching of gender identity and race central to his platform, and has led the charge for parental oversight in education, amid a re-election campaign and, some political observers theorize, a run for president in 2024.

Such policies have found support in battleground states, according to at least one recent poll, and a majority of candidates that Mr. DeSantis endorsed for school boards in Florida won their elections this week.

His office did not respond to requests for comment.

One of the new Florida laws, the Parental Rights in Education Act, bans instruction on sexual orientation and gender identity in kindergarten through third grade and says that instruction in older grades must be age appropriate. The law, nicknamed “Don’t Say Gay” by critics, also requires schools to notify parents about changes in student services, such as if a transgender or nonbinary student wants to use new bathrooms or locker facilities, or seeks to change their name or pronouns at school.

Another law, known as the “Stop WOKE Act,” limits teaching on race and racism, including prohibiting instruction that would compel students to feel responsibility, guilt or anguish for what other members of their race did in the past.

Not all teachers feel wary.

Some believe their job is clear: to teach reading and math, not race and sexuality. Still others say some contested concepts were never part of the curriculum to begin with.

Scott Davey, a seventh-grade civics teacher in the Tampa Bay area, anticipates “no difference whatsoever.” He teaches a state-outlined curriculum that focuses on government, including the United States Constitution and the Bill of Rights. “We teach the benchmarks,” he said. “That’s plenty to keep us busy.”

Others, though, described a sense of trying to thread a political needle. It’s not just about what they teach, it’s also about how students interpret it. For example, the law says teachers cannot compel students to believe that anyone is inherently privileged or oppressed because of his or her race.

“I’ve never used the word oppression in my classroom,” said Renel Augustin, who teaches African American history at a high school in Davie, Fla., covering everything from the trans-Atlantic slave trade to the civil rights movement and beyond.

He presents historical facts, he said, and allows students to draw their own conclusions.

Still, he said, “it’s really hard to read all of that history, see all of these situations, present all of this evidence and think that these kids aren’t going to come to a conclusion that there is some type of oppression.”

Perhaps most complicating of all, teachers say, are the ways students sometimes bring up race, gender identity and politics on their own — from musing about whether Scout, the tomboy character in “To Kill a Mockingbird,” might be trans, to asking about illegal immigration during a lesson on citizenship.

Rebecca McDermott, who teaches gifted classes for elementary students in Duval County, said she has heard students use the term “gay” to insult one another. In the past, she said she typically intervened and asked students to reflect on what the term meant.

“A lot of times they didn’t know,” said Ms. McDermott, who is gay and raising two children with her wife. “It’s just something they’ve heard.”

Now, she wonders if it is best to steer clear. She has mentally practiced what she might say this year: “We’re not here to talk about that. We are here to learn. Let’s move on.”

State officials have said that the Parental Rights in Education Act limits instruction on sexual orientation and gender identity, not mere discussion.

In response to a lawsuit challenging the law, state officials said that gay teachers could display family photos, employees could intervene against bullying based on gender and sexuality, and schools could host clubs for L.G.B.T.Q. students. The law does not ban “incidental references in literature to a gay or transgender person or to a same sex couple,” according to court documents.

Still, the law has left some educators wondering: Where does discussion end and instruction begin?

“It was always written to be vague and to be sweeping in its effect, because the goal was the chilling effect,” said Joe Saunders, senior political director for Equality Florida, an L.G.B.T.Q. advocacy group that is suing the state.

Students, too, wonder what is allowed. Adrianna Gutierrez, 15, a sophomore in Hialeah, Fla., who is lesbian, said that when she first heard about the law, she was crushed. “I was like, oh my God, I’m not going to be able to express who I am,” she said.

She later learned that, in fact, she could talk about her identity in school. She has been working to spread the word to other students.

Bridget Ziegler, a school board member in Sarasota County who recently won re-election with an endorsement from Mr. DeSantis, said that the law has been “completely misrepresented, with the tagline that I forbid to say, because I don’t even want to give it any more air.”

Ms. Ziegler, whose husband is the vice chairman of the Republican Party of Florida, pushed back against reports that school employees would be required to notify parents if a student came out as gay, which she said was not relevant to the child’s educational services. But if children wanted to change their name on school paperwork because of gender identity, for example, “that is a different story.”

“Parents need to be involved, and not cut out,” she said.

For Sheryl Posey, a school psychologist in the Orlando area, the new requirements pose a “huge ethical conundrum.”

When a student confides in her about their gender identity or sexuality, she said it is her practice to ask whether they have a safe person to talk to at home.

“I want to partner with parents,” she said. But if a student is not ready to come out, she is bound by professional ethics that require confidentiality unless a student is at risk to themselves or others.

If required to out a student, she is unsure what she would do. (The law allows school districts to withhold information that might result in abuse, abandonment and neglect.)

“I’m really at a loss, honestly,” Ms. Posey said. “It feels very much like trying to walk a tightrope, between law and ethics.”

With politics looming over the classroom, even classics like “The Great Gatsby” are taking on new meaning this year.

“We’re all nervous,” she said.