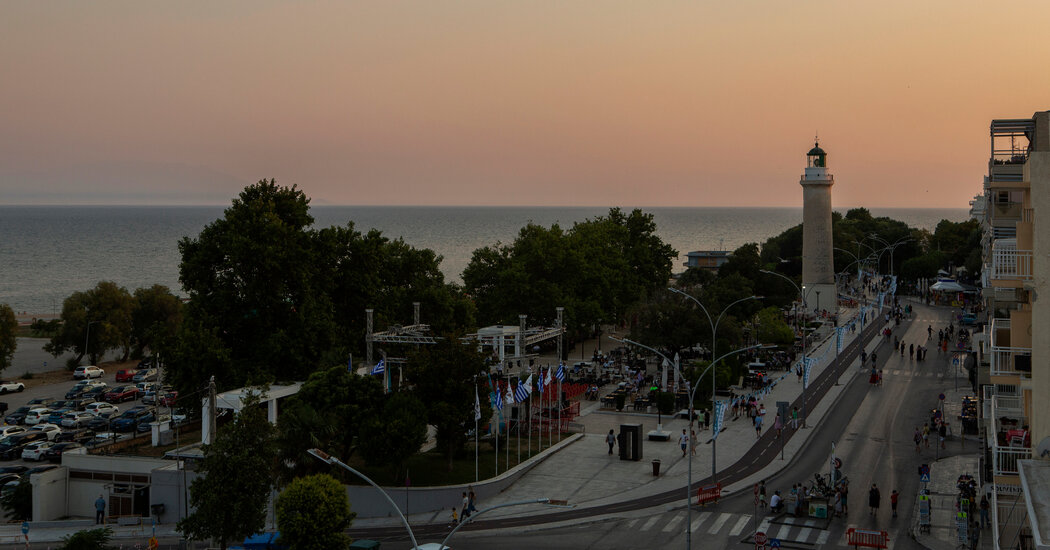 ALEXANDROUPOLI, Greece — It is an unlikely geopolitical flash-point: a concrete pier in a little coastal city, barely used a few years ago and still occupied only by sea gulls most of the time.

But the sleepy port of Alexandroupoli in northeastern Greece has taken on a central role in increasing the U.S. military presence in Eastern Europe, with the Pentagon transporting enormous arsenals through here in what it describes as the effort to contain Russian aggression. That flow has angered not only Russia but also neighboring Turkey, underlining how war in Ukraine is reshaping Europe’s economic and diplomatic relationships.

Turkey and Greece are both NATO members, but there is longstanding animosity between them, including conflict over Cyprus and territorial disputes in the Mediterranean, and Ankara sees a deeper relationship between Athens and Washington as a potential threat.

The spike in military activity has been welcomed by the government of Greece, most of its Balkan neighbors and local residents, who hope that Americans will stimulate the regional economy and provide security amid rising regional tensions.

“We’re a small country,” said Yiannis Kapelas, 53, an Alexandroupoli cafe owner. “It’s a good thing to have a big country to protect us.”

Raising the strategic stakes is the impending sale of the Alexandroupoli port. Four groups of companies are competing to buy a controlling stake — two include American firms, backed by Washington, and two have ties to Russia.

U.S. military operations in Greece have expanded greatly since Russia invaded Ukraine in February, and top officials from Moscow and Ankara have called that a national security threat.

“Against whom were they established?” President Recep Tayyip Erdogan of Turkey said in June, referring to the U.S. military outposts in Greece. “The answer they give is ‘against Russia.’ We don’t buy it.”

While most of NATO has sided emphatically with Ukraine, Mr. Erdogan — always willing to chart a different course — has positioned Turkey as a mediator.

In May, the Greek Foreign Ministry claimed Turkish fighter jets violated the country’s air space over Alexandroupoli, just 11 miles from the Turkish border. The incident unnerved local residents concerned with Turkey’s claims to parts of Greece.

The complex interplay of interests at Alexandroupoli highlights how the war is shifting the strategic focus of Europe to the Black Sea region.

“The Black Sea is back on the global agenda in an unprecedented way,” said Ilian Vassilev, a former Bulgarian ambassador to Moscow who now works as a strategic consultant. “Security in the Black Sea is central to the issue of how you contain and deal with Russia.”

Greece and Russia share deep historical, economic and cultural ties centered on the common Orthodox Christian religion. Greeks are among the few Europeans who largely want to maintain economic ties to Russia, polls show. But the war in Ukraine has badly strained those bonds.

The occupation of Ukrainian lands has struck a chord among Greeks, many of whom see parallels between the imperial rhetoric of President Vladimir V. Putin and the territorial claims of Turkey, whose predecessor, the Ottoman Empire, ruled Greece for centuries. The plight of Ukrainians has also resonated with Greek families whose ancestors fled Turkish pogroms in the early 20th century.

“We know about the pain of refugees,” said Dimosthenis Karavoltsos, an Alexandroupoli taverna waiter. “There was no question in my mind about what side we should be on.”

Greece’s conservative government was one of the first to send military aid to Ukraine, prompting the Kremlin to put it on the list of “unfriendly” nations. Fear of Turkey and solidarity with Ukraine have pushed Athens closer to Washington, and it has granted the United States expanded military access in several locations.

The amount of war matériel moved by the United States through Alexandroupoli jumped nearly 14-fold last year — before the war, but as tensions with Russia mounted — to 3,100 “pieces,” a catchall term used by the Pentagon for all sorts of equipment from tanks to ammunition. It has already matched that figure this year.

U.S. officials say the equipment is destined solely for American military units stationed in Eastern and Northern Europe, not for Ukraine.

The jump in activity is a drstic turnaround for a minor port that stood largely idle for almost a decade, blocked by a sunken barge that the U.S. Navy removed in 2019.

The town’s languid mood is transformed every few months when U.S. warships dock to unload tanks, trucks and artillery. The arrival of hundreds of Americans prompts periodic shortages of eggs and cigarettes, and lines outside tattoo parlors.

Between those bursts of activity, few signs pointed to the city’s new importance. On the beach promenade near the port, couples push strollers, and day trippers, mostly from Turkey, snap selfies under the city’s lighthouse. Civilian shipping remains minimal because of the lack of large cranes, but the Pentagon is installing heavy equipment to handle more cargo.

“What we have done is transform the port into a dynamic military operations hub,” said Andre Cameron, who oversees U.S. military logistics at the port. “Nothing like it has been done here before.”

Local officials said they hoped the military upgrades at the port would attract investments in other industries, turning Alexandroupoli into a trade hub for nearby Bulgaria, Romania and even blockaded Ukraine.

The port’s growing strategic importance has highlighted the Russian ties of two Greek business groups competing to take it over.

One group is led by Ivan Savvidis, a Russian-Greek oligarch who has served in the Russian Parliament and sits on a foreign relations committee advising Mr. Putin. “Greek by birth, Russian by lifestyle, Orthodox by faith,” says a statement on Mr. Savvidis’s website, which features a photo of him with Mr. Putin.

Mr. Savvidis’s bid may be complicated by his ownership of the port of Thessaloniki, Greece’s second largest, which could run afoul of competition laws. His spokesperson declined to comment.

Copelouzos is the local partner of state-owned Russian gas company, Gazprom, and, in a joint venture called Prometheus Gas, is Greece’s third-largest supplier of natural gas. Copelouzos Group built — and, until 2016, operated — the airport of St. Petersburg.

A diplomatic memo on the group’s founder, Dimitrios Copelouzos, written by the American ambassador to Greece in 2007 and published by WikiLeaks is titled “Gazprom by any other name?”

Mr. Copelouzos’s competitors and detractors claim that these ties make him vulnerable to pressure from Gazprom, compromising the future of Alexandroupoli’s strategic operations.

“There are significant concerns because the situation with Russia can deteriorate,” said John Charalambakis, an owner of BlackSummit Financial Group, an American asset management firm that is competing for control of Alexandroupoli. “The fact that Russia is using energy as a weapon is an important factor.”

Concerns over Mr. Copelouzos’s Russian ties are shared by some members of the U.S. Congress, according to two congressional staff members familiar with the matter. They spoke on condition of anonymity because they were not authorized to speak to the news media.

Copelouzos Group is privately held and does not make public its financial performance but says that its joint venture with Gazprom represents a tiny share of its business portfolio, which spans construction, real estate and energy.

“The group has many cooperations across the world with many companies,” said Ioannis Arapoglou, the Copelouzos Group’s general manager. Prometheus Gas “is just one of those, and a relatively small one for the size of the company.”

He noted that the Copelouzos family is investing in a project to build a liquid natural gas terminal near Alexandroupoli, meant to reduce Balkan reliance on Russian gas by bolstering supplies from the United States.

For his part, Mr. Charalambakis, the American businessman, says his interest in the port began in 2018, when Washington’s ambassador to Greece at the time, Geoffrey Pyatt, told him American companies needed to start competing with Russia and China for influence there.

Washington’s growing attention was highlighted on Wednesday, when Senator Robert Menendez of New Jersey, chairman of the Foreign Relations Committee, made a surprise visit to Alexandroupoli.

Greece has been steadily privatizing strategic assets since its debt crisis begun in 2009. The Thessaloniki port went to Mr. Savvidis; the port of Piraeus, Greece’s largest, to a Chinese state-owned firm.

Mr. Pyatt, who left the post in May, has spoken out frequently in support of the two American bids for Alexandroupoli.

The other American bidder, Quintana Infrastructure & Development, declined to comment.

This pragmatic approach is echoed in Alexandroupoli. Local officials and businessmen hope the war in Ukraine and regional tensions will transform the port into an alternative supply route that bypasses the Turkish-controlled straits to the Black Sea.