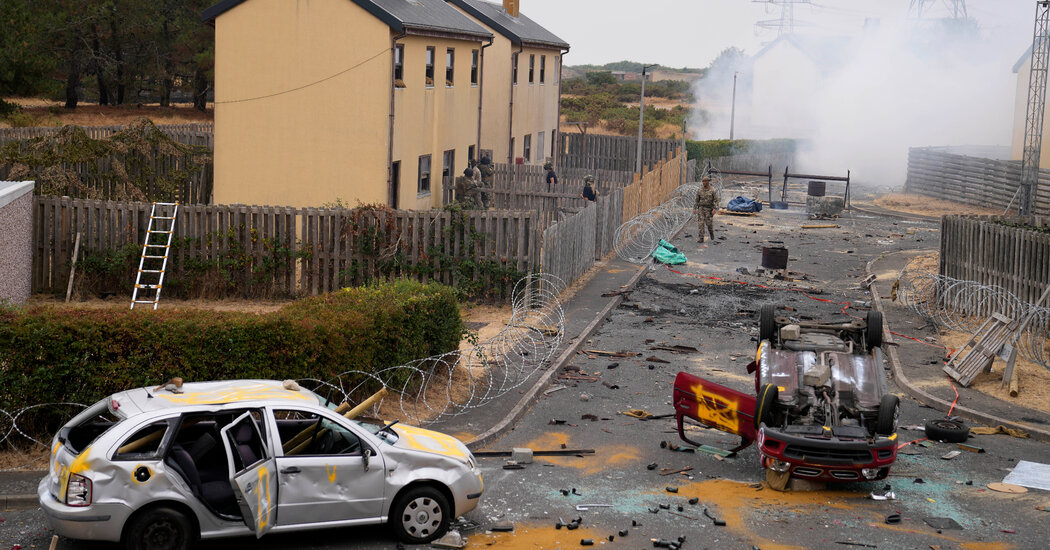 KENT, England — Ukrainian recruits waged a mock battle directed by British commanders on Monday in southeast England at a training village designed to resemble the scenes of battle unfolding on the front lines of Ukraine more than a thousand miles away.

A British commander, flanked by a Ukrainian interpreter, shouted orders. Ukrainian conscripts, in camouflage fatigues, traversed a street strewn with grenade canisters, burning debris and overturned cars. A “wounded” man was brought out on a stretcher, moaning.

At the village in Kent, the battles were pretend, but for these soldiers, real ones were probably only weeks away.

“This training in urban areas is exactly what we need,” said Nick, a 25-year-old trainee who offered only a nickname for fear of Russian retaliation.

He was taking part in an ambitious British-led program to provide military training to 10,000 Ukrainian Army recruits and staff, an effort that aims to help bolster local resistance to the Russian invasion.

The initiative, announced by Prime Minister Boris Johnson in June, began with more than a thousand British soldiers from the 11th Security Force Assistance Brigade, which specializes in foreign training. The British trainers have already sent 2,000 Ukrainians to the fight back home.

Other nations, including Canada, Denmark, Finland, Sweden and New Zealand, have pledged to join in after Britain requested help.

The training of troops by foreign powers has long been part of Ukraine’s plan to combat Moscow’s invasion. Before the war, Britain and other Western allies, including the United States, gave extensive training to the Ukrainian military.

The Yavoriv training center, a military base outside the Ukrainian city of Lviv, which was attacked by Russian forces in March, was a hub for troops from Britain, Canada, Latvia, Poland, the United States and other Western nations that had trained Ukrainian forces there since the 1990s. Britain says it helped train more than 22,000 Ukrainians from 2015 until earlier this year through a program called Operation Orbital. It was paused right before Russia’s invasion.

Western combat training, according to experts, has been instrumental in helping the Ukrainian Army during the war.

“The training from NATO countries before the war has been crucial,” said Jamie Shea, a former NATO spokesman who is now an associate fellow at Chatham House. “The Ukrainian Army is massively smaller than the Russians’, so the quality of training in leadership skills and tactics had to compensate for quantity.”

With the war moving into a new lethal battlefield of attrition, he said, many of the “battle-hardened trained troops” who benefited from Western training were sustaining heavy losses. By the Ukrainian government’s own estimates, as many as 200 of its soldiers are dying every day. The conflict’s long-run trajectory has spurred a nationwide campaign to recruit more civilians.

“We are in a critical moment,” said Frederick B. Hodges, a former top U.S. Army commander in Europe who is now a senior adviser at Human Rights First. “To be able to launch a decisive counteroffensive, Ukraine is going to need a lot of well-trained troops and formations. Which is why what is happening in the U.K. right now is an essential element of Ukraine eventually winning this war.”

The goal of the training program, Mr. Shea said, is to equip the fresh conscripts with essential skills. “These new recruits need the rudiments of survival through basic training so that they don’t get themselves killed on the first day and live to acquire knowledge of the battlefield,” he said.

While the new effort focuses on basic infantry training for civilian recruits, Britain has also trained hundreds of Ukrainian soldiers in England in using more complex weaponry, like the multiple-launch rocket systems it has supplied to the Kyiv government.

The Ukrainians who gathered on Monday were part of a group of several hundred who had been flown in on British military planes and taken to the army base in Kent, a windswept corner of south England, where British forces previously prepared for operations in Northern Ireland. It’s one of four sites where the British trainers are leading three-week courses that cover combat tactics, medical and weapons training, and the laws of war.

In the village, a troop of former teachers, civil engineers and businessmen carried variants of the AK-47 weapons that they will be using on the frontline. Others toted long green tubes, or antitank weapons called NLAWs, thousands of which Britain has donated to help Ukrainians destroy Russian tanks and armored vehicles. The sounds of artillery blasted as the group stormed the front door of a house to clear it.

“I have never seen people so willing, so eager to fight,” said Maj. Craig Hutton, a Scottish commander who oversees the training. “It’s an absolute cross section of Ukrainian society that has come together because they have a severe threat against their homeland.”

The training includes lectures and military maneuvers, which were planned in collaboration with Ukrainian military and intelligence officials, he said, and aims to mirror some of the vexing situations they are likely to encounter back home.

“Everything in these scenarios was designed to replicate scenes we’ve seen on the battlefield in Ukraine — right down to the spray paint on the vehicles in the street,” Major Hutton said.

The mock battle on Monday was the conclusion of a four-day course in urban warfare.

“We are at a phase in the war where we need to reclaim our cities from occupying forces,” said another trainee, named Snizhana, 34, who said she planned to relay everything she has learned to other recruits back in Ukraine. “The British officers training us have experienced this warfare in Iraq and Afghanistan — so now it is very useful for us.”

A few hundred feet away, a commander led 13 Ukrainian men, ages 18 to 50, in a shooting drill. “If you expose your legs, there’s a chance you will be shot in an artery,” he said, adjusting the arms of one of the younger-looking recruits with his heel.

“Nobody wants to die,” a trainee, Zakhar, said. A civil engineer before enlisting three weeks ago, he said he had been motivated to join his brother on the frontline and avenge the life of his best friend, who was killed in battle.

“I want my children and grandchildren to live in a free and flourishing, independent country,” he said.