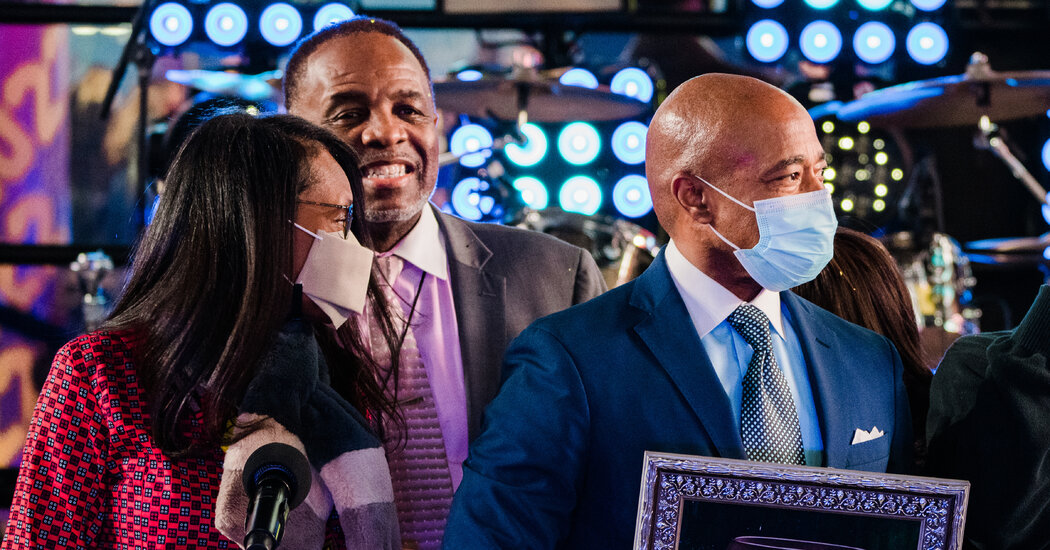 Mayor Eric Adams has appointed a former New York City police official and close confidant as a paid senior adviser — while allowing him to keep his job as an executive at the Resorts World New York City casino in Queens, according to city officials and a person close to Resorts World.

Since May 31, the adviser, Timothy Pearson, a retired police inspector, has served as both a city official and the vice president responsible for overseeing security at the casino, which is seeking state approval to expand its gambling offerings in Queens. City support for its bid could prove pivotal.

On top of what he earns from the casino job, Mr. Pearson receives a city-funded salary through the nonprofit New York City Economic Development Corporation under an unusual arrangement that allows him to continue collecting his $124,000 annual Police Department pension.

State law prohibits city officials from simultaneously receiving a salary and a pension from the city. Mr. Pearson is able to do so because he is being paid by the development corporation, a nonprofit controlled by the mayor.

Initially, Mr. Pearson had worked on Mr. Adam’s behalf without pay during his mayoral transition last fall, and for the first five months of his administration before he was put on the public payroll as a senior adviser to the mayor for public safety and Covid recovery, said Fabien Levy, a spokesman for Mr. Adams.

Mr. Adams’s administration has declined to answer other questions about the arrangement, including how much the city is paying Mr. Pearson. According to Mr. Levy, the economic development corporation reached out to the New York City Conflicts of Interest Board on Mr. Pearson’s behalf. He said Mr. Pearson is following all applicable laws.

As of Tuesday, the board had issued no waivers of the conflicts of interest law to Mr. Pearson, records show.

“New Yorkers are lucky to have such a knowledgeable and experienced individual agree to serve and bring his expertise to the greatest city in the world, especially after he did the job without being paid a single dollar for months,” Mr. Levy said in a statement.

Mr. Levy said Mr. Pearson’s municipal job responsibilities had no overlap with casino policy, and instead included working with law enforcement to help improve the city’s public safety, the centerpiece of Mr. Adams’s mayoral agenda. Mr. Levy also said Mr. Pearson would recuse himself should any interaction between the casino and the development corporation arise.

Mr. Pearson is also responsible for coming up with and executing a plan to keep city schools open and interfacing with the business community, Mr. Levy said.

A representative of Resorts World, which is owned by Genting, a Malaysian gambling conglomerate, declined to comment.

Mr. Pearson, 62, has known the mayor for decades, having served as his police supervisor when Mr. Adams, himself a retired Police Department captain, was on the force. The two men are so close that Mr. Pearson stood behind the mayor and among a handful of friends and family on the small Times Square stage where he was sworn in on New Year’s Day.

Mr. Pearson retired from the Police Department in 2011. Today, when he is not working at Resorts World, he can be found sporadically in attendance at public safety meetings, often with instructions that he says come directly from the mayor, according to a City Hall official.

To other staff, it has not been immediately clear what his brief is, several officials have said. Mr. Pearson has an office in a downtown building at 375 Pearl Street, as does the mayor, according to Politico, and the deputy mayor for public safety.

Mr. Pearson played a significant role in the mayor’s selection of his police commissioner, interviewing candidates, according to several senior city officials.

Mr. Levy, the mayor’s spokesman, referred questions about Mr. Pearson’s city-funded salary to the Economic Development Corporation. A spokeswoman for that nonprofit provided Mr. Pearson’s hiring date in a text message but declined to release his salary or answer other questions from The Times.

In April, New York State approved the issuance of three new licenses for full-scale casinos. Mr. Pearson’s other employer, Resorts World, which right now only offers electronic games, is considered a front-runner to receive one of the licenses. Having one would allow the casino to also offer table games like roulette.

The lengthy and complicated license application process requires several layers of approval, including the support of four of six members on a community advisory committee. The mayor will have one representative on that board. But his influence, as the mayor of New York City, is expected to be larger.

“The mayor is the mayor, he’s very powerful,” said John Kaehny, the executive director of Reinvent Albany, a government watchdog group. “It’s very unlikely that the state would proceed with locations that were strongly opposed by the mayor.”

The mayor’s hiring of Mr. Pearson while allowing him to keep his private sector job, and his administration’s reticence in responding to questions about Mr. Pearson’s role, underscore Mr. Adams’s tendency to prize loyalty, even at the expense of transparency and long-accepted ethical norms.

“You can’t serve two bosses and there’s a direct conflict of interest here,” Mr. Kaehny said, adding: “Mr. Pearson has to decide who he wants to be and which job he wants to have.”

Past administrations have also put staff members on the payroll of the economic development nonprofit, as a way to hire outside the confines of the City Hall budget. They have included Terence Monahan, who retired as chief of department for the New York Police Department during the administration of Mayor Bill de Blasio. Mr. Monahan, who held a similar title at the nonprofit as Mr. Pearson holds, received an annual salary of $242,592 while also collecting his police pension. Today, 10 employees from other parts of the Adams administration are on the Economic Development Corporation’s payroll, according to the nonprofit’s spokeswoman. It is not clear how many were hired since Mr. Adams took office.

Mr. Adams’s relationship with the gambling industry dates to his days in the State Senate, where he served as chairman of the Racing, Gaming and Wagering Committee. In that role, he and other senators became enmeshed in a scandal over the awarding of a video-lottery contract at Aqueduct Racetrack — the same site now operated by Resorts World New York City’s parent company, Genting.

The state inspector general found that Mr. Adams and other Senate Democrats had used “exceedingly poor judgment” by fraternizing with lobbyists for the winning bidder — a different company — and by accepting significant campaign contributions from people affiliated with the contenders. Mr. Adams disavowed responsibility, and the company’s award was later rescinded.

While committee chairman, Mr. Adams raised nearly $74,000 in 2010 from racing and gambling interests, according to an analysis by a professor at Albany Law School. Mr. Adams has also raised money from casino executives and would-be casino landlords as mayor.

Mr. Levy said that Mr. Pearson’s casino job would not interfere with his job as adviser to the mayor.

“They’ve known each other for approximately 30 years, since they were both in the N.Y.P.D. together, putting their lives on the line and serving the people of New York City as officers during some of the most dangerous times in New York City history,” Mr. Levy said. “Tim was even in one of the towers that collapsed on 9/11 and continued to aide in the rescue of New Yorkers that day after making his way out of the rubble.

“As an officer, and in the years since he left the force, Tim has shown himself to be a knowledgeable and experienced public servant who has worked to make this city and its people safer.”