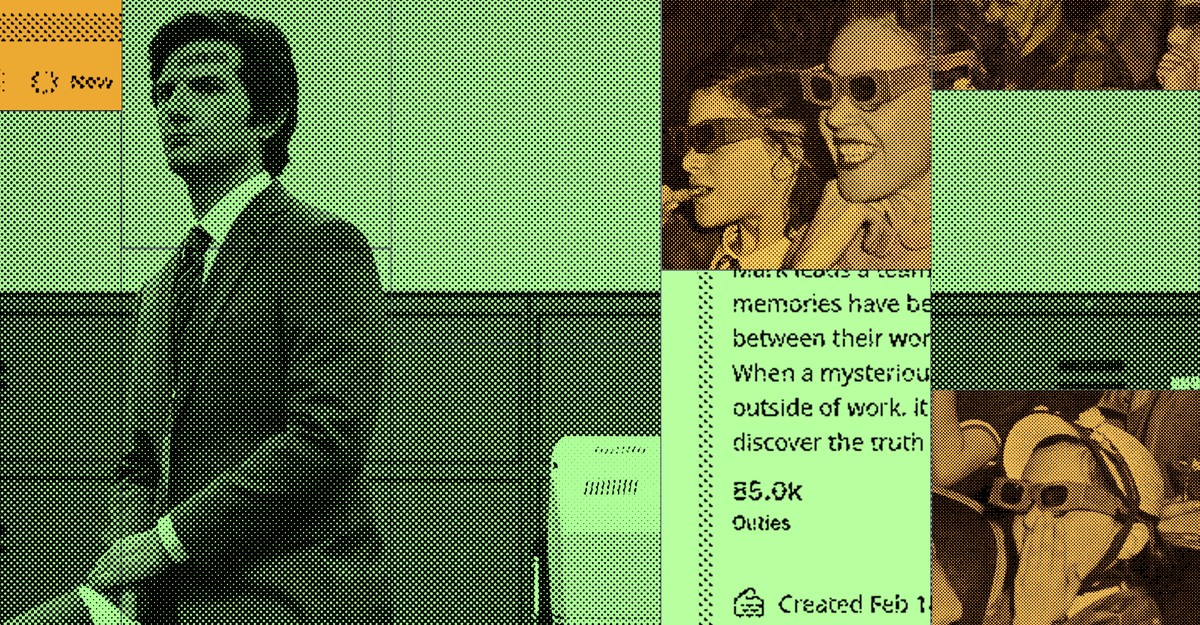 Dan Erickson, the creator of Severance, has been having what he calls “anxiety daydreams.” He’s working on the second season of the acclaimed Apple TV+ series, and though the show just got nominated for a bevy of Emmys, he’s already picturing the worst: headlines about disappointed viewers, articles analyzing his ineptitude, reviews pronouncing “the biggest precipitous drop-off in quality in the history of television,” he told me over the phone, laughing nervously. “I don’t think it’s going to be,” he clarified, “but, I mean, that’s the worry from somebody in my position.”

After all, Erickson isn’t just the showrunner of a hit drama. He’s the showrunner of a hit drama with the most discerning of audiences: the theorists. These are the fans who pick apart scenes for clues, listen to dialogue with the intensity of an FBI sting, and can anticipate entire storytelling arcs long before the show actually gets there. They don’t simply watch something; they solve it. Severance follows in the footsteps of series such as Lost, Mr. Robot, and Westworld, puzzlebox mysteries that attracted fans who feverishly speculated online. These shows spawned an entire industry built on watching a project solely to see if a prediction, no matter how tame or ludicrous, panned out.

Read: When work is a terrifying dystopia

Erickson witnessed this level of theorizing firsthand; he admitted that he visited the Severance subreddit “quite a bit” while the first season aired. But seeing viewers correctly guess a character’s true identity much earlier than expected made him nervous. They’d gone off a single line of dialogue he’d thought insignificant at the time, so for Season 2, he’s been reconsidering how to dole out such details. “Now I think we probably would not include that line,” Erickson said, “or we would make it a half step more obscure.”

Storytelling has always been a dance between the creators and the audience. Plots turn and twist, steering expectations and swaying emotions. But as filmed entertainment has grown on a near-exponential scale, encompassing interconnected franchises and expanding onto more platforms than ever before, audiences have begun to more actively engage with what they watch. They analyze, turning ambiguity into clarity, forging connections with fellow fans. As a result, storytellers have to do more than spin a satisfying yarn; they must contend with fans who are so involved, they’re practically racing them to the finish line. For TV shows in particular, the most passionate viewers have become a part of the writers’ room—not physically, of course, but as a looming presence, at least in the minds of those shaping seasons’ worth of plot.

To better understand how such a close relationship between writers and fans affects the projects themselves, I spoke with producers working on the latest wave of puzzlebox shows. Everyone told me that dealing with fan theories can be equally thrilling and daunting. Vocal fans can validate their work, but knowing that their audience is watching so intently has become an occupational hazard when plotting mysteries and lore-driven tales.

Take Yellowjackets, for instance. Like Severance, the Showtime series about a high-school girls’ soccer team that gets stranded in the Canadian wilderness has attracted a dedicated fan base of theorists, thanks to a complex plot. Jonathan Lisco, a co-showrunner, told me that these theories have become an “inevitable” discussion topic in the writers’ room. Sometimes, they help stress-test potential material. If a significant majority of the audience is into a certain theory, “we have to kick the tires on it,” he said. Usually, though, fan input lingers in the back of the writers’ minds, like a sixth sense. They’re always aware that their behind-the-scenes work will be hyper-examined on-screen. “With so many smart viewers out there, eventually, people are going to hit upon things that we’re noodling in the writers’ room, and that’s a cross-pollinating delight,” he said. “But it can also be, really, a mess.”

Devising a theory isn’t easy. Just ask Leif Eric Johnson and Torvald Johnson, brothers who co-host The Popcorn Isn’t Real, a podcast devoted to dissecting fan theories. For a recent episode, they wanted to examine the idea that the protagonist of the animated Disney film Encanto was not who she seemed, so Leif Eric spent six hours watching and combing the movie practically “frame by frame,” he told me, for “evidence.” For a series of installments on Harry Potter–related theories, Torvald went on a studio tour in London; there, he scrutinized the props, reading “any piece of paper with writing that was ever used in the movies.” Such immense effort, they explained over Zoom, can help illuminate new layers to what they watch. “For me, it just comes from a perspective of wanting to understand how movies work,” Leif Eric said. “If I can watch them in a different way than I did before, it makes it more fun.”

The pair began their podcast in the fall of 2020 and quickly found an audience that seemed as captivated as they were by alternate interpretations—and perhaps as in need of escapist fare as they were, months into the pandemic. As the project took off, they began inviting guests who worked on the titles they were discussing and could therefore, if they were lucky, confirm their theories. To their excitement, most of the creative talent they sought embraced the opportunity to talk about their theories. Joseph Kosinski, the director of Top Gun: Maverick and 2013’s postapocalyptic drama Oblivion, for example, “wholeheartedly” accepted the idea that Tom Cruise, the star of both films, was playing the same character in them. “If you have a fan theory that you like about a specific movie,” Torvald said, “who better to hear from than the person who created the movie?”

Fan feedback is nothing new, but theories once seemed to be a joyless experience for creators. Years after the Lost finale aired in 2010, the series’s co-showrunner Damon Lindelof left Twitter, overwhelmed by the negative reactions from fans still disappointed over how they had expected more of their predictions to pan out. (Later, he explained in an interview that he had “obsessed on it in a very unhealthy way.”) Mr. Robot creator Sam Esmail said that when the audience figured out the core twist of Season 2 earlier than he’d anticipated, “everybody on set was like, Oh, shit, this is fucked up.” The HBO series Westworld started trolling Redditors after fans figured out the machinations of the first-season finale long before it aired. Fan obsession could be gratifying, but for writers, outsmarting viewers without disappointing them seemed to primarily be a burden.

That attitude appears to be changing. Some shows deliberately court fan scrutiny. On The Afterparty, the Apple TV+ whodunit, the creator Chris Miller told me that the writing team leaves “little gift baskets” in every episode—Easter eggs that reward eagle-eyed viewers with a clue to the killer’s identity. “It’s exciting to be living in the world that we’re living in now, where people can watch and rewatch and freeze-frame,” he told me. On Only Murders in the Building, Hulu’s similarly comedic murder mystery, every installment’s opening credits offer a hint of the story to come. John Hoffman, a co-creator of Only Murders, told me that he giddily followed online fan reactions while the first season aired, eager to see if viewers became sleuths themselves. “I was like, ‘Look at these fabulous theories we didn’t put in our show!’” he recalled. “They’re terrific.” While writing Season 2, Hoffman felt energized by the knowledge that the show had such fervent fans. “You’re constantly checking yourself to say, ‘If we do this here, what signal are we sending?’” he said. “That’s the discussion 90 percent of the time in the [writers’] room, which is fantastic.”

The best fan theories tend to have a stimulating effect. To Amber Goldsmith, a moderator of the subreddit r/FanTheories, a prediction about a popular project—whether a movie, show, comic, or video game—can be “a conversation opener.” “The more I posted, the more connected I felt to the community,” she told me. When a theory gets shared across social media or covered by one of the many outlets trawling Reddit for content, the space between fans and creators seems to collapse. Today, casts and crews are frequently asked about fan theories, and such interactions make the practice of inventing them not just pleasurable, but addictive. The most enthusiastic fans seek validation for their theories, so they go beyond watching something. They study what goes on behind the scenes, keep up with interviews, and, in the case of theories involving major franchises, become armchair experts in what intellectual properties—say, a superhero or comic-book character—a studio might be able to license for future projects. “Today, the audience has become not only more sophisticated in terms of their interpretation of the art-slash-commerce side of TV,” Lisco explained, “but also more sophisticated in their understanding of what it takes to make TV.”

That understanding, he said, seems to have led the relationship between writers and fans to “a more mutually beneficial place,” in which writers can appreciate the effort that goes into fan input rather than fear what they produce. But coming up with theories on the internet isn’t the same as outlining a season’s worth of plot in the writers’ room. No amount of detective work will place a viewer directly inside a writer’s head. No amount of soaking up fan commentary will ensure positive feedback in the future. As much as the Yellowjackets team enjoys reading theories, Lisco explained, “we can’t be overly influenced by [them] lest we lose track of the primary story that we want to tell … What we’re really trying to do is surprise the audience in its emotional jugular, not necessarily [on a] concrete plot level.”

Lately, when Erickson feels stuck trying to do that for the second season of Severance, he spends five minutes writing down “the craziest stuff I can think of,” he said. Forget tone or story goals; he just takes the biggest swing possible with his characters and sees what sparks. In some ways, Erickson is doing what most fan theorists do—taking a tale’s bare bones and constructing a new skeleton, warming up the imagination in the process. And the strategy, he told me, tends to work. For storytellers like him, pressure can feel constant, and answers can seem scarce—especially when you’re fighting for the attention of an audience pulled in countless directions. Theorizing can offer a focal point, however wild the resulting idea may be. “You have to be willing to embrace that madness,” Erickson said. It’s certainly better than dwelling on anxiety daydreams.