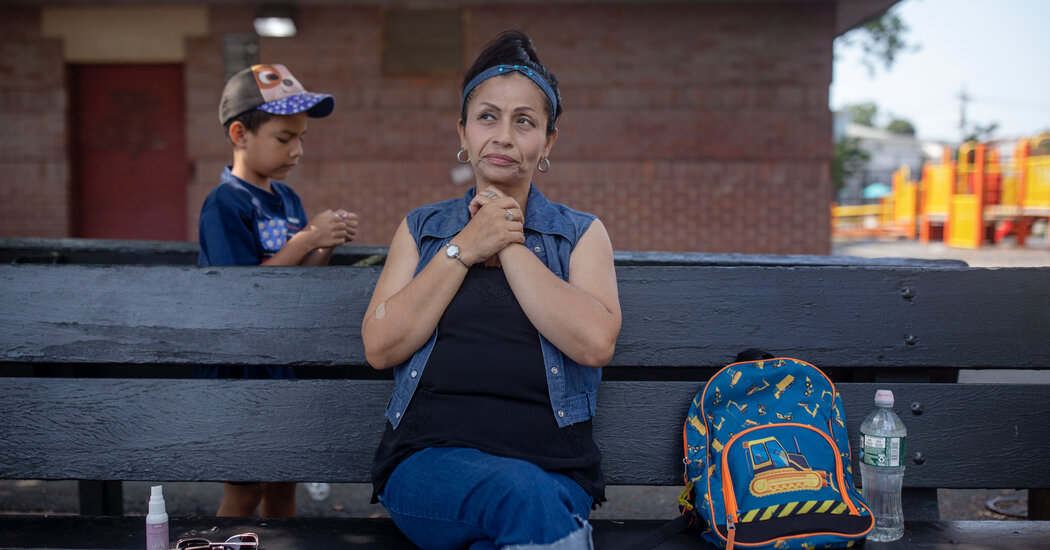 Outside Liberty Pool in Jamaica, Queens, near the home where Mayor Eric Adams was raised, Rosa Soriano watched her 6-year-old son play in the swelter of a midsummer heat wave.

Ms. Soriano, a manicurist, thought about Mr. Adams, the challenges he faces in his first year in office and his seemingly genuine interest in improving the city. But then she reflected on her own set of difficulties. She worries about crime and said she took care not to visit the park after 7 p.m., fearful that “somebody will rob you.”

She would like to have her son learn how to swim, but the city canceled a program that offered free lessons, in part because of a national lifeguard shortage. And she wants more from her son’s education: His class was too large, she said; the mayor has opposed a state bill to lower class sizes.

Seven months into Mayor Adams’s term, the hope and excitement that many New Yorkers felt after his election are giving way to concern that he has not taken the bold steps needed to solve the city’s most intractable problems.

Their list of concerns is long: rising crime, high inflation, another wave of coronavirus cases and a monkeypox outbreak. There is unease over the city’s overwhelmed homeless shelter system, growing anxiety over its economic recovery from the pandemic and complaints about noxious piles of trash lining the streets.

Many New Yorkers are rooting for Mr. Adams, a former police officer who ran for mayor on a public safety message. Even so, more than 55 percent of residents said in a recent poll that the city was heading in the wrong direction.

The New York Times interviewed New Yorkers at city parks, pools, playgrounds and street corners to get a sense of how Mr. Adams has done in his first year.

Mr. Adams clearly relishes the job, immediately becoming the city’s leading cheerleader and a noticeable presence in the city’s nightlife, but some argued that he cannot run the city on charm. His affordable housing plan has been criticized as too weak, and his school budget cuts have raised concerns about his commitment to improving education.

“I love him — I think he’s wonderful,” said Mitzie Clarke, 68, a retired teacher who lives in Jamaica. “He’s one of us.”

As she exercised in the park on a recent morning, Ms. Clarke said that she was most concerned about homelessness, and that she supports the mayor’s campaign to remove homeless people from the streets. She said she had prayed for years for a woman living outside a subway stop who recently left the spot.

“When the mayor actually removed them completely, I said ‘hallelujah,’” she said.

Ms. Clarke also appreciates the mayor’s style and the way he expresses empathy.

“I like how he dresses,” she said, adding: “His heart is good. He’s compassionate.”

A teacher, Maria Mohammed-Richards, 28, said that her school was affected by proposed budget cuts that were recently overturned by a judge. Enrollment has dropped, and the principal had to make difficult decisions.

“She was asked to cut eight teachers,” she said, speaking at the Liberty Pool where she brought her young daughter, Sehven. “I would have been on the list, but she was able to keep me.”

The school budget cuts have become a political issue for Mr. Adams, and he has fought with the City Council over restoring some of the money. Mr. Adams has said that cutting more than $200 million for the next school year was necessary because roughly 120,000 families left the school system over the past five years, mostly during the pandemic.

The mayor opposed a bill to reduce class sizes — approved by state lawmakers in June but not yet signed by Gov. Kathy Hochul — because he said the school system did not have the money to fund the limits and that many class sizes had already been reduced by lower enrollment.

Mr. Adams has called himself “the future of the Democratic Party,” but his approval rating in New York City has quickly dropped. Only 29 percent of New Yorkers rated his performance as good or excellent in the recent poll by NY1 and Siena College.

The mayor has focused on crime more than any other issue and argues that he is making progress. Murders and shootings are down this year, but major crimes are up by more than 35 percent.

His team has highlighted other achievements, including a new funding plan to improve public housing, rebounding tourism figures, universal dyslexia screenings for students and discount fares for poor and disabled ferry riders.

Still, the poll found that only 21 percent of New Yorkers thought that Mr. Adams was doing an excellent or good job at fighting crime, and 45 percent rated him as poor on that issue. He received higher grades on encouraging tourists to visit and on managing city services.

Mr. Adams had a higher approval rating among Black residents — about 39 percent rated him good or excellent, compared with 25 percent of white residents. Among the boroughs, his strongest support was in the Bronx.

In the Hunts Point neighborhood in the Bronx, an area Mr. Adams won in the primary, Jade Figueroa, 20, said the mayor had not made an impact on her life. While Mr. Adams has pledged to make child care more affordable, Ms. Figueroa said she failed to get help paying for child care through the city’s 311 service.

“The application was so complicated I gave up,” Ms. Figueroa said as she played with her 1-year-old daughter at a playground. “It would be nice if the city doesn’t make services so hard to get.”

Mr. Adams received some of his worst poll numbers on homelessness. Only 18 percent of New Yorkers rated him as excellent or good on addressing homelessness, and 49 percent said he was doing a poor job.

He has cleared homeless encampments while pledging to add 1,400 beds at homeless shelters. He released a plan in June to invest billions of dollars in affordable housing, but he declined to say how many units the city aimed to create.

Julio Rivera, 38, a fast food worker who lives in the Morrisania neighborhood in the Bronx, said that he believed that the mayor was not doing enough to help the homeless. Mr. Rivera said he spent most of his life in and out of shelters and that many of his friends who are homeless have not received housing vouchers.

“The mayor just wants to make homelessness go away,” Mr. Rivera said as he waited for his son’s school bus. “That’s not how that works. You give them a home and give them job opportunities and services so they don’t end up back in the streets.”

The Siena poll showed strong support for some of the mayor’s policies: 85 percent of residents supported adding police officers on the subway; 60 percent supported breaking up homeless encampments.

Sarah Grassi, 23, sat among the sea of office workers and tourists at Bryant Park in Midtown Manhattan on a recent afternoon. She works at a logistics company in Manhattan and said she felt fortunate to live in a rent-stabilized apartment in the Glendale neighborhood in Queens.

Ms. Grassi said she voted for Maya Wiley, a left-leaning candidate in the Democratic primary for mayor, and does not support the mayor’s “very pro-police mentality” and his removal of homeless people.

“Just because something becomes less visible to you as a resident doesn’t mean the problem goes away,” she said.

One reason for the city’s homelessness crisis is an acute lack of affordable housing. Rental prices have soared this year, and the average rent in Manhattan for new leases rose to $5,000.

Arturo Hernandez, 22, grew up in New York City and moved back this spring after finishing college. Having recently climbed a fifth-floor walk-up during the heat wave to view a small apartment in Manhattan that he could barely afford with two roommates, he felt defeated.

“The cost of living in the city is insane,” he said while sitting in Bryant Park, adding that he considered moving to Chicago because it seems more affordable.

Mr. Hernandez does not blame the mayor for the current housing market, but he said he was not confident that Mr. Adams was moving aggressively to solve the problem. The mayor seems more focused, he said, on enjoying the perks of the job.

“He goes out there and thinks he’s kind of a celebrity,” he said, “when he should be down on the ground rolling his sleeves up doing the work.”