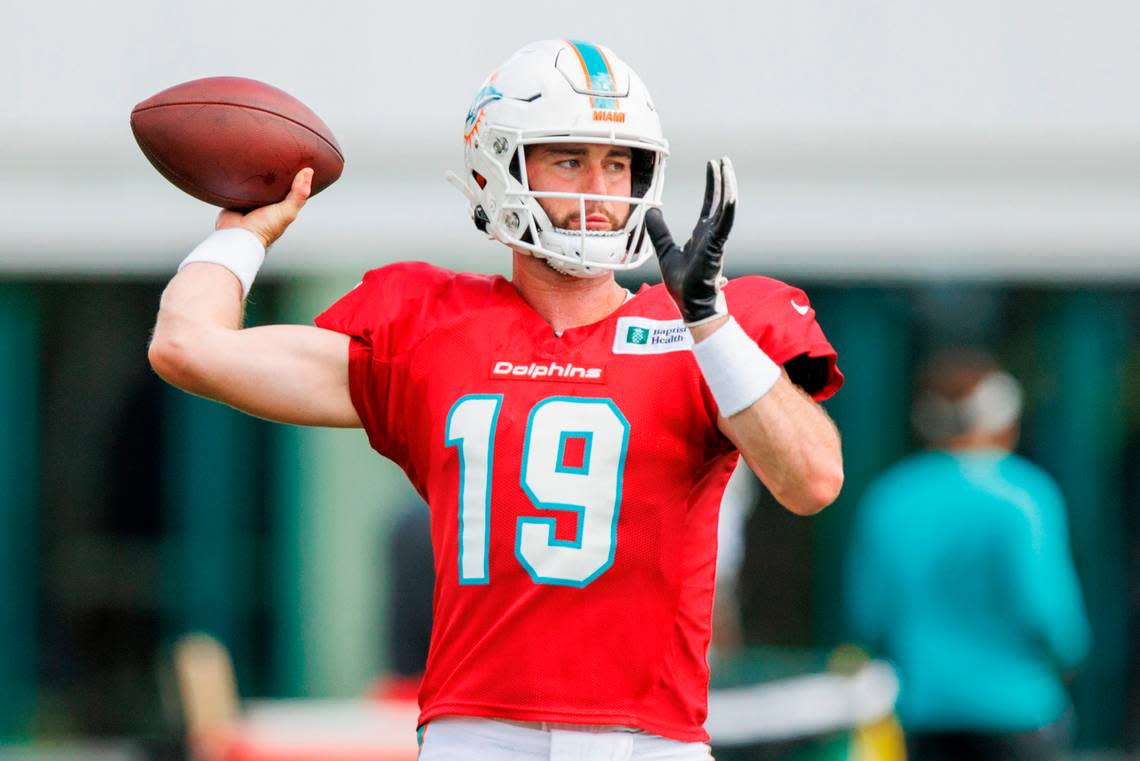 And in that regard, Skylar Thompson has been exemplary in his first NFL training camp.

Thompson has missed on some throws he should have completed, but he also hasn’t thrown a single interception in eight training camp practices entering Saturday.

The rookie seventh-round pick from Kansas State has attempted between five and 15 throws in most practices. And he has at least a half dozen completions of 20 yards or more.

“It’s a great thing not to have thrown any picks but I’ve missed some receivers downfield,” he said. “I missed a post that I need to capitalize on [Friday]. Still lots of mistakes. I knew there would be mistakes coming into this. I knew it wouldn’t be perfect.”

Thompson, if you’ve noticed, is hard on himself. So merely not throwing an interception in camp doesn’t leave him content.

“There’s a fine line of being too conservative,” he said. “We want to put pressure on the defense, take our shots, take our chances. But also take care of the football which is what we try to do.”

One thing he has noticed, compared to the Big 12, is “in this league, as I figured out, if you’re not on time, it’s most likely going to be an incompletion because the separation of being open is way different this level compared to college. Being able to throw the ball before guys are out of their break, being able to anticipate, I feel I’ve gotten better at but there’s always room for improvement and it will come.”

He said team executive and former Dolphins legend Dan Marino sits in the quarterback meetings but doesn’t talk much. Quarterbacks coach Darrell Bevell watches a quarterback make a throw on tape and kids with Marino about what Marino would have done on that throw and “we’ll giggle,” Thompson said, adding that he appreciates having Marino around.

Left tackle Terron Armstead, working his way back from an offseason knee procedure, hopes to play a full season for the first time in his career.

Beginning in his second season in 2014, Armstead has missed 38 regular season games and played in 71.8 percent of the Saints’ games. He missed nine last season with knee and elbow injuries.

“This is what I do for a living, this is how I feed my family, this is how I make my life,” he said, when asked how often he thinks about playing a full season for the first time in his career.

“So ideally, all I want to do is play. Unfortunately, we don’t always get to do what we want to do. My injuries have been a result of a lot of different things, more so compounding, coming back too early and all those good things.

“Mike McDaniel and [athletic trainer] Kyle Johnston and the rest of those guys have been conscious and cognizant of everything that I’ve dealt with previously, but I’m trying to get on that field every day, every play. You try to prehab, do all this preventative work that I’m definitely tapped into – the nutrition, the mobility, all those good things.”

Armstead has participated in limited 11 on 11 work because of his maintenance program. How much 11 on 11 practice work or preseason action does he need to be ready?

“Ideally, I want to be able to feel like I’m ready, like I’m game-ready and season-ready as early as possible,” he said. “But I’m not there yet.”

The Dolphins and Buccaneers will have joint practices on Wednesday and Thursday in Tampa.

▪ Right guard Robert Hunt loves the team’s new wide zone blocking scheme: “This is the type of offense that I want to play for, if I can, for the rest of my career, probably.”

Hunt said he’s a “lot slimmer” than a year ago.

▪ Thompson said McDaniel has three rules: protect the team, no excuses and be on time.

▪ Porter Gustin — who has one sack in 26 NFL games (including four starts) for Cleveland over the past three seasons — has had at least three sacks the past week. He said he’s playing both defensive end and outside linebacker.

▪ Receivers coach Wes Welker, on his unit: “Everybody understands how deep our room is. Whenever you get an opportunity, you better take advantage of it. We’ve got to get Cheetah [Tyreek Hll] and Jaylen [Waddle] ready and still have three preseason games to see who’s going to separate themselves as far as fourth, fifth, sixth spot on the roster.

“I’m not a big fan of flash players. I like guys that are going to bring it every single day where I know who I’m getting each and every day. It’s rare you find guys in the NFL that are able to turn it on on game days.”

▪ Waddle, asked Friday about the first time he met Tua Tagovailoa: “He was quiet. He was like four lockers down from me at Bama and he kept calling me the wrong name. He kept calling me Jason. I don’t know why.”