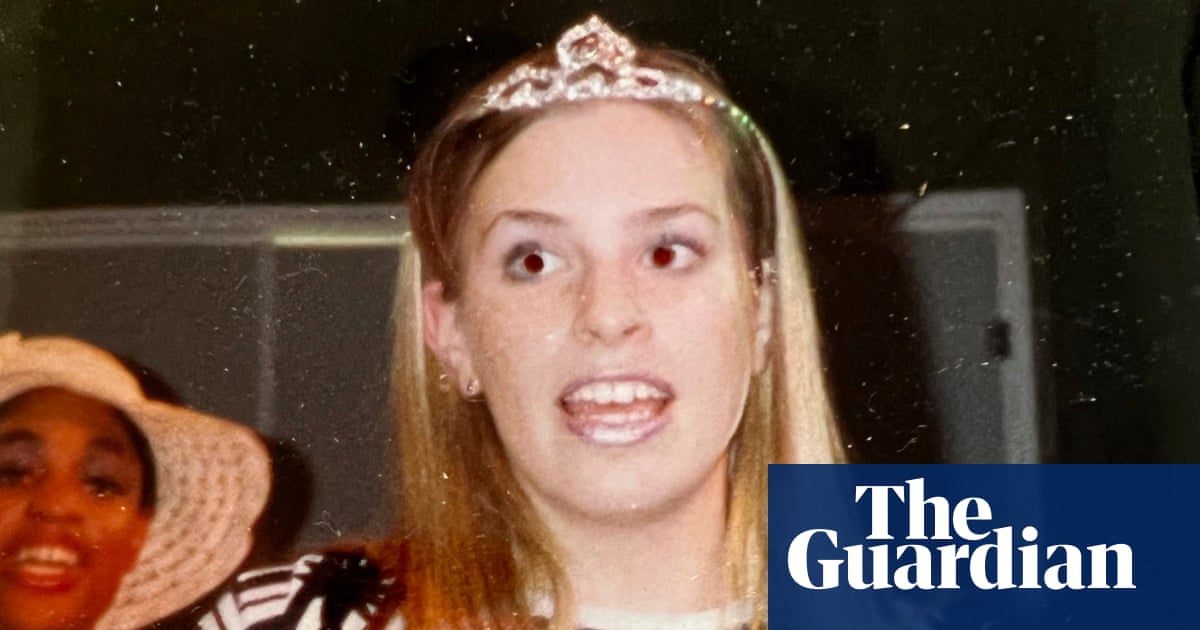 Born in Dagenham in 1981 and raised in Romford, Sara Pascoe is one of the UK’s leading standup comedians. Known for weaving whimsical comedy into routines about science and politics, she began on the comedy circuit in 2007, and was nominated for the Edinburgh award in 2014. Pascoe went on to become a TV panel show fixture on shows such as QI and 8 Out of 10 Cats, and starred in her own series, Last Woman on Earth, in 2020. She has written two books, 2016’s Animal: The Autobiography of a Female Body, and Sex Power Money, in 2019. Pascoe’s new live show, Success Story, is touring from November and into 2023.

This is a photo of my first time on stage, playing Glinda the good witch in The Wiz. Behind me is Sophie, a fellow member of the drama group. There was a lot of talk about weight backstage, and as a result I remember thinking I looked fat, which is tragic really. Other than that, I was just excited to get my hands on a bit of frosted lipstick – it was a Rimmel classic from the 90s. We were performing at a small theatre, but still slathered the orange foundation and eyeliner on thick so the people at the back could see our facial features; as if we were Laurence Olivier or something.

Performing for Theatre Box in Romford was pivotal for me, even if it started out as a punishment from my mum. A few weeks before I joined she had gone out for the night and I ended up hosting this house party – loads of kids turned up and trashed the place. Mum came home the next morning, took one look at the bin bags full of empty bottles, clocked the lingering cigarette smell and knew what had happened. There was a woman who ran a drama group and lived on our road, so Mum decided that banishing me to the stage would be an adequate form of retribution and keep me off the streets. Sadly it backfired horribly as it set off my juggernaut of an ego. I thought: “I’m going to be an actor now!”

The 14-year-old me was amazing. She had bad makeup, rejections and terrible feedback, but got me my job today

Before I joined that group I didn’t have good friends. Everyone in my school year thought I was odd – I was the type of girl who’d ask the teachers if she could put on assemblies about poetry. When I was in the drama group I was seen as a quirky and fun person, rather than the weird kid with the wrong trainers. It also helped that the people who ran it acted as if being on stage was a feasible future profession. Their encouragement obviously paid off – Andy Day from CBBC was part of the group, and Russell Tovey ran in the same circles. Even though we were from Romford and working class, we were told anything was possible.

Around that time, fame started to play on my mind. My dad had been in a band – 70s pop group Flintlock – but didn’t enjoy it and quit after a few years. When I told him that I was going to be famous, he was really against the idea. Not in a Billy Elliot way – he never said I wasn’t allowed to do it – but because he was a proper musician he was scared I’d do some TV talent competition. He was desperate for me not to become famous for fame’s sake, and wanted me to learn a proper trade. Sadly, I didn’t take heed: I auditioned for Michael Barrymore’s TV show, My Kind of People, which took place in a shopping centre. I got there, did a short interview with Barrymore, started to perform a song, then forgot the lyrics, so I just cried. To try and egg me on, the audience joined in. I was so ashamed of what happened, and didn’t talk about it for a very long time. But when I got offered a chance to do the singing competition All Together Now a few years ago, I seized the opportunity to make amends. Gemma Collins and some sports people were also competing; my agent said: “I think you’re past this.” I said: “I don’t think you understand, I’ve got to do this for my teenage self! Imagine if I can sing!” So I did it: I went on stage, had a horrible time, came last and Geri Halliwell said I was bad at singing. Suddenly I was back with Barrymore!

Nobody saw my comedy career coming. My mum loves telling people how unfunny I was growing up and how surprised she was that it became my career. I sort of despised comedy too. At uni, if you’d asked me if I liked standup, I’d say: why is anyone laughing? Have you seen the world? I took myself far too seriously, and decided I could only keep acting if I did the sort of plays that might help improve people’s lives: political theatre, Brechtian agitating, stuff that made you think, and maybe saved the environment, too. In the end I realised it’s a lot easier to make people listen if you’re trying to make them laugh too.

It took me a while to find confidence; my voice. When I was young, one of the things I used to do to give myself a boost was to pretend I looked like this girl at school who had massive boobs, olive skin and curly brown hair – basically the opposite of me. I felt the same thing when I first started to do standup – I really enjoyed being on stage, but what I didn’t like was the insecurity of: “Oh God, they’re looking at me.” I wished I was on the radio, just a disembodied voice. So I tricked myself into imagining I was someone else. The trouble with that is you’re still undermining yourself. This dissociation – while it gave me false confidence – didn’t give me any deep self-belief.

What I was saying on stage was so important and enjoyable to me, but when I saw a picture of the gig, I’d suddenly feel disappointed and think: “What! I looked like that!” I noticed other women comics wore clothes that were not meant to be noticed, and I started doing the same. I’d put on a raincoat or dress in all black. There was a time I’d think: “Shit, I don’t have time to change before the gig. The audience is going to see my knees!” Then, when I saw Andi Osho on stage it all changed: she was the first British comic to dress like she was glamorous, beautiful – like you were supposed to be noticing that about her as well. Katherine Ryan took that approach to another level. These days, if I’m in the mood to look dressed up, I’ll do it. I often tell myself that I am funnier the uglier I look. If I think I am having a bad hair day it’s fantastic as it means I’ll have a great gig.

I’m 41, and I look back at this skinny girl with her really long hair, her lovely 14-year-old skin, and think how terrible it was that I had those negative thoughts. Especially since becoming a mum, having my own small child, it’s made it clear how hard we are on ourselves. When it comes to my baby and success – all I want is health, and for him to be alive for a long time. Gentleness and confidence; that he thinks he’s enough. Because really, the 14-year‑old me was amazing. She got me my job today. She had bad makeup, rejections, terrible feedback, and still kept thinking: “There’s something at the end of this.” She had real chutzpah – and I have so much to be grateful to her for.