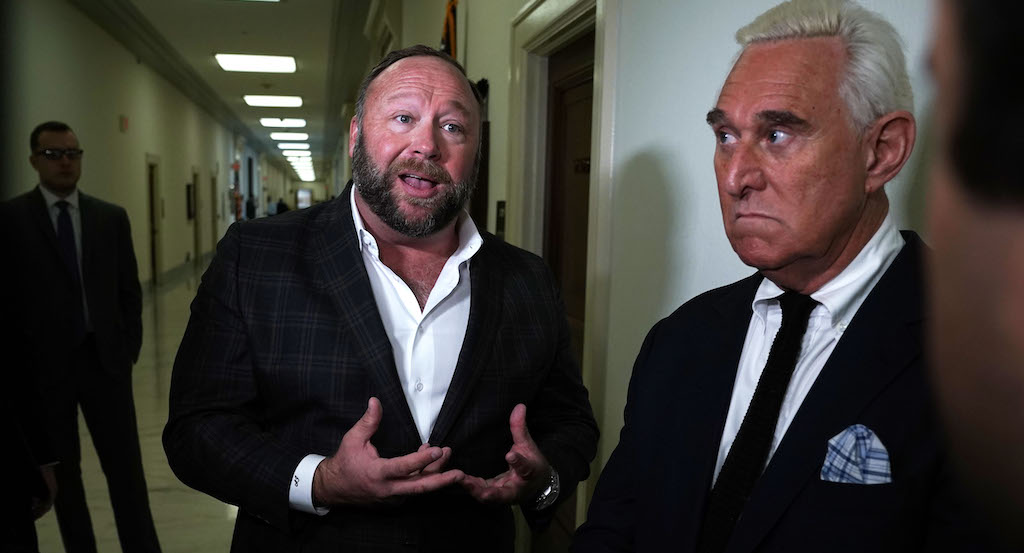 Roger Stone is in deep doo-doo. Last week, the conspiracy theorist was found guilty in a defamation trial, having spread nonsense about parents of victims of the Sandy Hook massacre. His punishment? He must pay a total of $49.3 million to one family alone — $4.1 million in compensatory damages, $45.2 million in punitive damages. Jones is already out there begging his fans for money. Now he has some help.

In reaction to the $42 million punitive verdict tonight, Roger Stone goes on InfoWars and makes an urgent plea for cash: “Alex Jones is a good and decent man. He’s a God-fearing christian .. and right now, he needs our support.” pic.twitter.com/DNZBnDS9e2

Fellow MAGA insider Roger Stone — who’s not doing too well either — recorded a video for InfoWars where he tried to double down on Jones’ efforts. “Alex Jones is a good and decent man. He’s a God-fearing Christian,” Jones pleaded. “”He’s done more for this movement than perhaps anyone you can name. And right now, he needs our support.” He then directed viewers to InfoWars’ merch page, so they can buy his questionable vitamins and books. If they don’t want any of that, he added, they could always just donate cold hard cash.

Stone is no stranger to appearing on Jones’ show, which has been widely de-platformed from places like YouTube. During an appearance on the show in April, Stone was interrupted by his host wandering in the background, shirtless.

Jones’ defamation trial was arguably the most bizarre in an era of out-there trials. At one point, he was informed, while on the stand, with a live feed streaming to the public, that the entire contents of his phone had been accidentally sent to the lawyer representing the Sandy Hook parents suing him. His punishment was parceled out in two parts. After being informed that the compensatory damages were “only” $4.1 million, he declared it a major victory. The next day, they tacked on the punitive damages, which happened to be about 11 times larger.