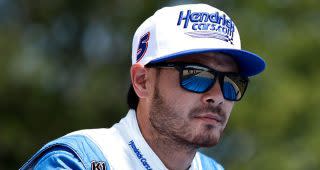 Kyle Larson spoke to reporters for the first time since his race at the Indianapolis Motor Speedway Road Course came to an abrupt end after a vicious crash with Ty Dillon in Turn 1.

The No. 5 Chevrolet launched into the corner and wiped out Dillon’s No. 42 car, nearly T-boning the vehicle at the end of the long front straightaway. Initial replays indicated a possible mechanical failure on Larson’s car, but the defending Cup Series champion chalked it up to an error behind the wheel.

“Obviously just made a big mistake,” Larson told reporters Saturday at Michigan International Speedway. “I got in there (to the corner) deep and I got out of shape. And I was hoping that by the time I got under control, I could go straight before they turned into the corner. And once I realized that I was going to hit the (No.) 47 (of Ricky Stenhouse Jr.), I tried to just do what I could to turn right and miss both of them. And that obviously didn’t happen.”

As the recipient of the blindsided impact, Dillon was left wondering what happened himself.

“I knew it was a mistake,” Dillon said Saturday. “And definitely looking at the SMT, it’s a really rare mistake that you wouldn’t think that he would make, but we’re all human. And that was kind of what I told him. I was like, ‘hey, we’re gonna make mistakes.’ That’s the risk I take every weekend getting in a race car and knowing that’s a possibility. I’m glad he’s OK, I’m glad I’m OK and we get to come out here and try it again at 200 mph at Michigan.”

Both drivers were stunned after the incident itself, trying to piece together what led to such a violent hit. The two had productive conversations Monday that set things straight despite the scare both received.

“I think he was in shock initially because he asked me what happened,” Dillon said. “I was like, ‘I don’t really know. You hit me really hard.’ But I was glad to see that he was OK.”

“I think it just shocked him as much as anything. I could kind of see the fear and everything in his eyes. I’m sure from his vantage point it was really scary, and he reached out to me on Monday checking in on me and was really kind in what he said.”

“Feel really bad about wiping Ty out and just very thankful that him and I were both safe and didn’t get seriously injured,” Larson said, “Because yeah, it was scary for both of us. Hate that that happened and just try not to make any mistakes like that going forward.”