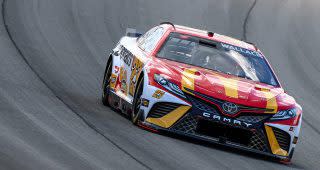 Wallace was the only driver to break 190 mph in the final round of qualifying, earning the top starting position with an average lap speed of 190.703 mph. The pole is also the first for 23XI Racing, which first began fielding cars in 2021.

The top 10 was completed by Kyle Larson, Denny Hamlin and Erik Jones.

A pair of part-time rookies will start from Row 6 on Sunday. Ty Gibbs and Noah Gragson, both of whom are vying for the Xfinity Series championship this season, posted quick lap times in Saturday’s session and narrowly missed advancing to the final round of qualifying from Group B. Gibbs will roll off P11 Sunday with Gragson 12th.

Chase Elliott, who entered the weekend as a co-favorite according to BetMGM, qualified 13th. Ryan Blaney, the defending race winner at Michigan and highest ranked driver in the playoff grid on points, will start 24th on Sunday.

Will Bubba qualify for playoffs this season? – Powered By PickUp