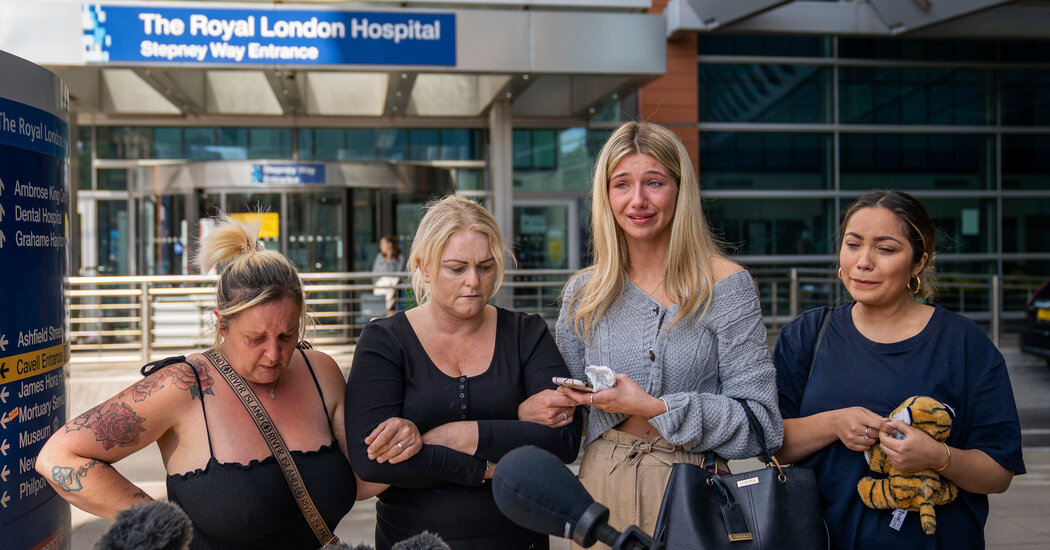 LONDON — Archie Battersbee, a 12-year-old British boy whose life support was withdrawn after a legal battle between his parents and his doctors, died on Saturday, bringing to an end another wrenching case over who makes life and death decisions for a seriously ill child.

Archie had been in a deep coma since his mother found him unconscious at their home in Essex, in southeastern England, on April 7, with something tied around his neck. His mother, Hollie Dance, has said that he might have been taking part in an online challenge.

“Can I just say I’m the proudest mum in the world — such a beautiful little boy, and he fought right until the very end,” said Ms. Dance, speaking to reporters outside the Royal London Hospital, where Archie was being treated. “And I’m so proud to be his mum.”

In a series of decisions, judges found that Archie had suffered severe brain damage and that the burdens of treating his condition “along with the total lack of a prospect of recovery” outweighed the benefits of continuing to keep him alive on a ventilator.

Archie’s family appealed the rulings, saying that they wanted to let him die at a time “chosen by God.” They argued that because of his Christian beliefs and of thoughts he had expressed in the past, Archie’s intention would have been to continue on life support.

On Wednesday night, after unsuccessful appeals to three different courts in a week, the family asked for Archie to be transferred to a hospice. Doctors at the hospital refused because of the risks attached to moving him, saying that they would most likely bring a “premature deterioration,” and the family’s legal efforts to overturn the decision were also turned down.

Ms. Dance had called the decision by the doctors to schedule a time at which is life support would be pulled a “choreographed execution of my son.” She asked why parents “have their decisions and their rights taken away.”

In Britain, when parents and doctors disagree about what is in the best interest of a child, a court is called on to decide. In recent years, similar high-profile cases have emerged, such as those of Charlie Gard and Alfie Evans. Pope Francis weighed in on both of those cases, and Donald J. Trump, when he was president, offered help from the United States for the 11-month-old Charlie.

Experts said that such painful dilemmas reflected a shift from when doctors made the final call, with the decisions seen as not just medical but also ethical. If parents disagree with doctors, almost impossible questions are posed, such as what kind of life is worth living and how grave a child’s condition has to be before it is deemed there is no chance of recovery.

In Archie’s case, doctors said that they believed his brainstem was dead. Because of the lack of response, however, doctors could not perform full brainstem testing, so he had not been legally declared brain-dead.

In hearings, judges sided with the medical evidence backing the conclusion that Archie had no prospect of recovery. They ruled that the medical support “serves only to protract his death, whilst being unable to prolong his life,” according to court documents.

Ms. Dance has said that Archie’s condition was better than that described to the court by the doctors. She said that he had shown signs of improvement, adding that he had even squeezed her hand.

Archie’s father, Paul Battersbee, has kept a lower profile during the legal battles, but he has supported the efforts to continue life support.

Dominic Wilkinson, a professor of medical ethics at Oxford University, said that the issue came down to a fundamental question.

“It’s about what is medicine for,” he said. “It is to make us better, to make us able to live and enjoy our lives. But sometimes all that medicine can do is to prolong the dying phase. And sometimes medicine, frankly, does more harm than good.”

But, he added, on this topic, doctors and families sometimes disagreed.

“Families sometimes may want to prolong life at all costs,” he said, “while the health professionals recognize that medicine has reached its natural limits.”

The leader of a Christian group that has been supporting the family’s case said such decisions should be recalibrated.

“The events of the last few weeks raise many significant issues, including questions of how death is defined, how those decisions are made and the place of the family,” Andrea Williams, the chief executive of the group, the Christian Legal Center, said in a statement. “No one wants to see other families experience what they have been through. We need to see urgent review and reform of the system.”

Last week, after the British Supreme Court refused to intervene to postpone the withdrawal of life support, Ms. Dance made an application to the United Nations Committee on the Rights of Persons With Disabilities, a branch of the organization’s human rights agency.

The agency said that it had asked the British government to refrain from withdrawing treatment while the case was under its consideration.

“All we have ever asked for is for more time,” Ms. Dance said in a statement at the time. “The urgency from the hospital and the courts is unexplained.”

“I don’t believe there is anything ‘dignified’ about planning Archie’s death,” she added. “Parents need support not pressure.”

But on Monday, the court refused to extend a pause beyond midday on Tuesday, arguing that the Convention on the Rights of Persons with Disabilities, under which the United Nations committee had made its request, was an “unincorporated international treaty” and that the decision to withdraw life support could stand.

The family asked on Tuesday to appeal the decision at the Supreme Court, but the request was turned down. The following morning, they filed an application to the European Court of Human Rights, which declined to intervene.

On Saturday, a little more than two hours after his life support was withdrawn, Archie died

“There is absolutely nothing dignified about watching a family member or a child suffocate,” said Ella Carter, a family friend. “No family should ever have to go through what we’ve been through,” she said, before breaking down in tears and burying her head in the shoulder of Archie’s mother.