Investors had been anxiously awaiting the second-quarter earnings report from Advanced Micro Devices (AMD 5.93%) earlier this week, especially after a report from Intel (INTC -1.37%) last week showed it had missed revenue and earnings estimates by a wide margin.

But AMD said it beat analyst estimates for revenue and earnings when it reported on Aug. 2. That strongly indicates Intel’s challenges are more internal than a reflection of all semiconductor stocks.

Based on AMD’s report investors are now wondering whether AMD will take a permanent lead over Intel or if there’s still hope for an Intel comeback?

Moreover, AMD’s non-GAAP income of $1.71 billion, or $1.05 per share, exceeded estimates of $1.03 per share. But while non-GAAP (generally accepted accounting principles) income increased 119% from 12 months ago, GAAP income fell 37% to $447 million. Considerable increases in research and development, and marketing, general, and administrative expenses weighed on GAAP earnings. Also, amortization of intangibles related to its acquisitions further reduced GAAP income.

In Intel’s defense, AMD confirmed sector-related weakness in PC sales and gaming. However, AMD reported an 83% revenue increase in data center revenue year over year. This stands in contrast to Intel’s 16% revenue decline in its data center and artificial intelligence (AI) group for the same time frame.

Additionally, AMD forecasts a 60% revenue increase for 2022. With Intel predicting an 11% revenue decline for 2022 at the midpoint, AMD appears poised to continue making gains on its longtime rival.

Worse for Intel, AMD said on its Q2 2022 earnings call that it will begin selling 5-nanometer (nm) processors in Q2. Soon after Pat Gelsinger became Intel CEO in 2021, he set Intel a goal of catching up to its peers technologically by 2024 and achieving industry leadership in 2025. He reiterated that goal on the Q2 earnings call.

However, Intel currently produces 10-nm chips and has not yet released its upcoming 7-nm chip. That places it far behind AMD, which has sold 7-nm chips since 2019. Given Intel’s performance, it is little wonder Intel’s stock is roughly flat over the last five years, while AMD stock logged massive gains. 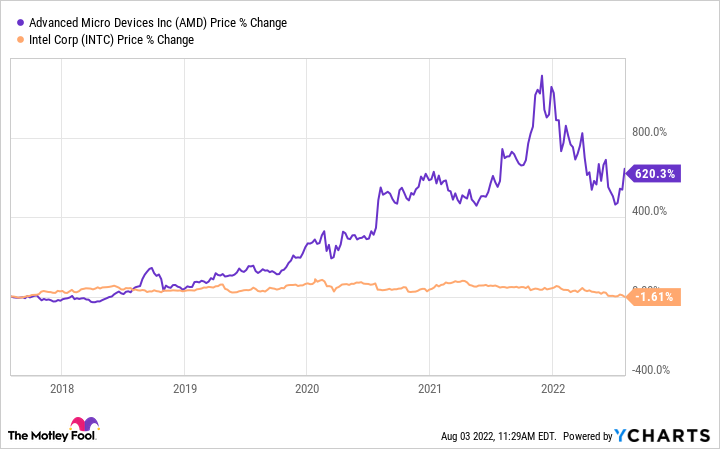 Still, Intel could recover eventually. The day it released its disappointing earnings report, the CHIPS Act passed Congress. With its numerous foundries in the U.S., Intel should gain a considerable subsidy from this legislation. The legislation will not directly help AMD as the company outsources all production to partner semiconductor fabrication plants (fabs) such as Taiwan Semiconductor Manufacturing or GlobalFoundries. Also, with Intel planning to enter the fab business through Intel Foundry Services, it will likely add an additional source of revenue.

Still, fabs take years to build, and Intel’s bid to catch up technologically is a three-to-five-year process. This means that Intel will likely remain behind AMD technologically for a long time to come, even if its ambitious plans succeed.

Intel’s Q2 earnings report does not spell permanent doom, but the current earnings report indicates any comeback is a long way off, assuming it occurs at all. With AMD firing on all cylinders and Intel not yet showing results, AMD should lead this competition for the foreseeable future.

Admittedly, Intel has steadily improved its technology, and entering the foundry business should eventually pay off for the chipmaker. But until Intel’s plans begin to produce results, investors should consider staying with AMD.