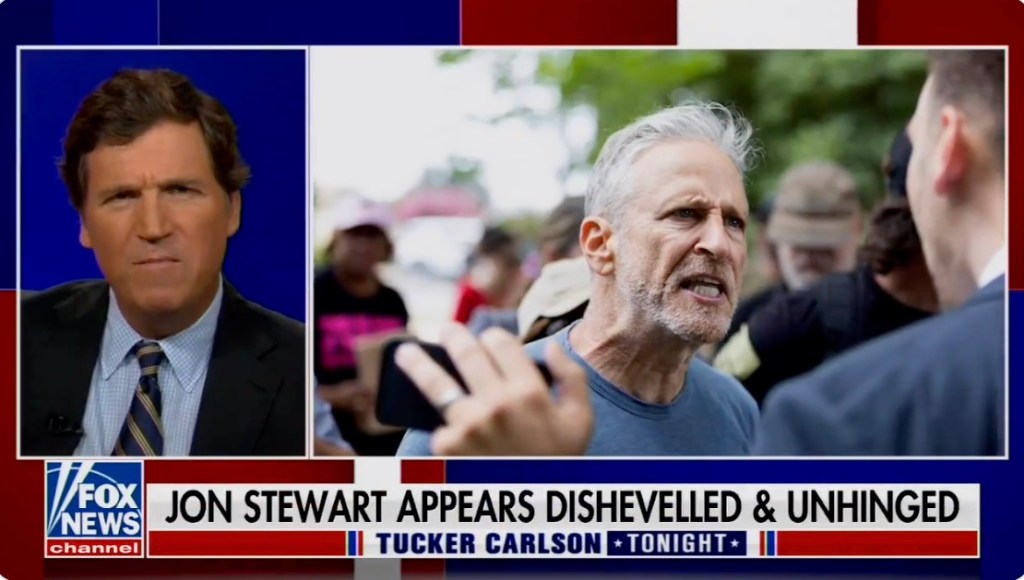 On Thursday night, Tucker Carlson did that thing he does where he fancies himself quite the wit and attempts to attack one of his naysayers with a seemingly dead-serious segment, where he usually attacks the person’s physical appearance. Nancy Pelosi has been a favorite target of the Fox News host, who recently mocked a photo of her wearing a bathing suit at the beach (and looking fabulous at 82, by the way). Back in January, he got a few chuckles by pretending that Pelosi was Michael Jackson. But last night, Carlson went after one of his biggest critics when he took aim at Jon Stewart.

As many people know, the former Daily Show host would most accurately be described as an activist these days and is particularly passionate about America’s piss-poor treatment of veterans, who have risked their lives and health for this country, only to have the government shrug their shoulders and claim they’re not responsible for the harmful effects of toxic burn pits and other dangers to which our members of the military are regularly exposed. Rather than acknowledge that Stewart had a point, Carlson—who seems to not understand what it’s like to have empathy for other human beings—instead decided to mock Stewart’s passion about these issues, as The Daily Beast reported. Clearly, the only thing that has ever gotten Carlson that heated is his martini being too dry.

Carlson commented on photos of a clearly fired up Stewart, describing him as looking like “a homeless mental patient. He’s shrieking and disheveled,” Carlson continued. “And very short. Really short! Too short to date.” (We don’t think Stewart will be losing any sleep over knowing that Carlson doesn’t want to date him.)

“What happened?,” Carlson wanted to know. “Where’s he been the last seven years?!”

While we’re guessing that Tucker’s question was rhetorical, it might help Carlson to know that while he’s been sitting on his Fox News high horse spreading conspiracy theories, promoting testicle-tanning, and becoming absolutely obsessed with Nicki Minaj’s cousin’s friend’s swollen balls (hmmm… seems like a pattern), Stewart has had deals with HBO and Apple TV+, where he currently hosts and executive produces The Problem with Jon Stewart. He has also been fighting side-by-side for health care rights for 9/11 First Responders and America’s military.

When he’s not busy with those tasks, he also sometimes finds time to tweet:

Friends. Tonite I am sad. @TuckerCarlson believes me too short to date…and yet somehow, miraculously, I remain tall enough to not know what Victor Orban’s ass tastes like! Is it goulash Tucky? Seems like it would be goulash.

Of course, Tucker’s issues with Stewart go all the way back to at least 2004—when Carlson (who was still in his bow tie phase) was a co-host on CNN’s Crossfire. Stewart appeared on the program one night and verbally annihilated Carlson and his childish sartorial choices. You can watch the full segment below.

(Via The Daily Beast)