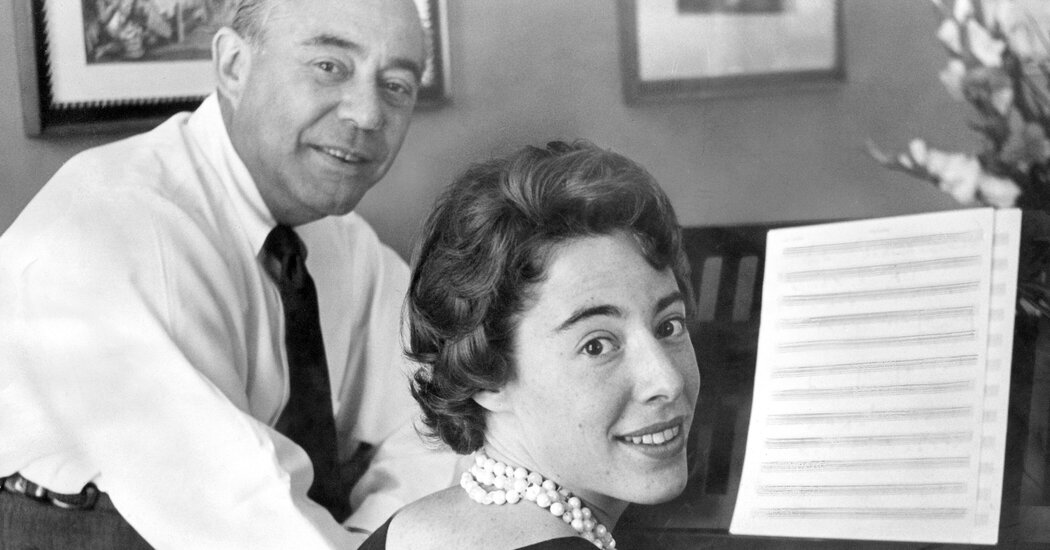 Let’s start with a full disclosure: I’m a sucker for Broadway — one of those theater fans who will see five different productions of the same show, who genuflect before cast albums from the ’50s, who inhale theater gossip as if it really mattered. I’m also a sucker for books about Broadway, books as different from one another as Moss Hart’s “Act One,” William Goldman’s “The Season” and Jack Viertel’s “The Secret Life of the American Musical.” But I’ve never read one more entertaining (and more revealing) than Mary Rodgers’s “Shy.” Her voice careens between intimate, sardonic, confessional, comic. The book is pure pleasure — except when it’s jaw-droppingly shocking.

Written in collaboration with the New York Times theater critic Jesse Green, who completed it after Rodgers’s death at 83 in 2014, “Shy” relates the life story of a successful songwriter-scriptwriter-television producer-children’s book writer. And also the mother of six, the wife of two, an occasional adulterer, a credulous participant in an earnest trial marriage to Stephen Sondheim (!) — and the daughter of two of the most vividly (if scarily) rendered parents I’ve ever encountered.

“Daddy” is the first word in the book, and it provokes the first of Green’s many illuminating footnotes, which enrich the pages of “Shy” like butter on a steak. This one grasps Richard Rodgers in four words: “composer, womanizer, alcoholic, genius.” The composer part we all know, and if your tastes run in the direction of “Oklahoma!,” “South Pacific,” “Carousel,” et many al., the genius as well. As for the other two elements, the womanizing was unstoppable, racing through chorus girls, Eva Gabor, apparently Diahann Carroll and definitely the original Tuptim in “The King and I” — according to Mary, “the whitest Burmese slave princess ever.” The drinking was equally prodigious. Dick (as he was known, and will be known here to keep the various Rodgerses straight) hid vodka bottles in toilet tanks — a clever ploy for an aging man whose bladder wasn’t likely as robust as it once had been. Lunches were lubricated with a 50-50 concoction of Dubonnet and gin. Evenings heralded a continuous parade of Scotch-and-sodas. A depressive who once spent three months in a psychiatric hospital, he was also remote and inscrutable, with a capacity for cruelty. Mary writes, “He hated having his time wasted with intangible things like emotions.”

Compared with Dorothy Rodgers, though, Dick (whom Mary eventually forgives and understands) could have been one of the Care Bears. But “Mummy” (given Dorothy’s desiccated rigidity, it’s a word that can be read as both a name and a noun) was vastly self-centered and brutally critical. Mary had so much to work with you understand why one chapter is called “I Dismember Mama.” She was a Demerol addict, a melodramatic hypochondriac, a neat freak (and, only somewhat incidentally, the inventor of the Johnny Mop). “Mummy’s idea of a daughter,” Mary writes, “was a chambermaid crossed with a lapdog; Daddy’s, Clara Schumann as a chorus girl.” In 1964 Dorothy published “My Favorite Things,” a high-end homemaker’s guide that told readers, as summarized by Green, “how to decorate their apartments and serve aspic.” Conveniently, he adds, “her marriage was just as cold and gelatinous.”

Dick and Dorothy are at least implicitly present throughout “Shy,” and Mary’s takes on them are alternately horrific and hilarious (she liked Dick’s earlier work, but “later, with all those goddamn praying larks and uplifting hymns for contralto ladies, I sometimes hated what he got up to”). But it’s the showbiz world they all lived in that lifts the book into the pantheon of Broadway narratives.

When I’m preparing to review a book, I highlight particularly strong material and scribble the relevant page numbers on the endpapers. For the first 17 pages of “Shy,” my list has 13 entries — and now, looking back, I see there’s also some pretty delicious stuff on 4, 7, 15 and 16. And even though my pencil was fairly inactive in the chapters about her two marriages (the second one happy, the first disturbingly not), I never bogged down. How could I resist a voice so candid, so sharp? You’re not even 10 pages into the book when she introduces the man who wrote the books for both “West Side Story” and “Gypsy” and directed “La Cage aux Folles” as “Arthur Laurents, the little shit.” (Later in the book, she goes deep: “Talent excuses almost anything but Arthur Laurents.”)

About Hal Prince, with whom she had an early affair: “Hal was born clasping a list of people he wanted to meet.” Leonard Bernstein, with whom she collaborated on his Young People’s Concerts for more than a decade: “It was hard not to pay attention to Lenny, who made sure that was always the case by always being fascinating.” Twenty-one-year-old Barbra Streisand, whom Mary first encounters backstage at a cabaret: “this gawky woman gobbling a peach, her hair still braided up like a challah.” Improbably, Bob Keeshan, a.k.a. Captain Kangaroo, for whom she wrote lyrics when she was just starting out: “a fat guy in a bowl haircut who named himself for a marsupial and looked like a little child molester.” And the 22-year-old Woody Allen, with whom she overlapped at a summer stock theater: He was “already the inventive weirdo he would become famous as a decade later,” spending much of the summer on the porch practicing his clarinet or inside (with his first wife, Harlene) “practicing sex, possibly from a manual. He was doing better, it seemed, with the clarinet.”

Mary has choice things to say about Bing Crosby, Truman Capote, Judy Holliday, Elaine Stritch, George Abbott (everyone who worked in the theater in the 20th century has George Abbott stories, but none quite so chilling as Mary’s). Even Roy Rogers and Dale Evans show up in this book. (She wrote songs for them, as she did for “Lassie” and “Rin Tin Tin” — the shows, she points out, not the dogs.) Similar work for the Bil Baird Marionettes enabled her to learn how to write for “certain wooden humans.”

But arching over the cast of interesting thousands who populated her world and this book, the central figure in her life, apart from her parents, was Sondheim. They met when barely teenagers; Mary was immediately, and permanently, smitten. They remained close for seven decades, relishing and relying on each other to such a degree that the almost-marriage seemed almost logical. The idea, which arose while they were still in their late 20s, was a one-year experiment (“I know what you are saying,” she tells the reader. “Mary, don’t!”). His homosexuality was a given, so although they often slept in the same bed, they never touched each other, both of them “frozen with fear. We just lay there. We didn’t discuss anything; we didn’t do anything.” Eventually, confusion, resentment and reality combined to declare it a mistrial, but it didn’t disrupt an abiding closeness that lasted until Mary’s death. “Let’s say it plainly,” Mary concludes. Sondheim “was the love of my life.”

Chronology is imperfect when a life like Mary’s is rendered by a mind like Mary’s; one of the book’s alternative titles, Green tells us, was “Where Was I?” She jumps back and forth between her many decades, digression dangling from an anecdote, in turn hanging from an aside. Sometimes, you’re left in slightly irritating (if amusing) suspense: About one family member, “I have nothing good to say — and I will say it later.” Would I have preferred a more straightforward narration? Not a chance, for it could have deadened her invigorating candor (which provoked another possible title: “What Do You Really Think?”).

Mary’s greatest theatrical success was “Once Upon a Mattress,” her musicalization (directed by Abbott) of “The Princess and the Pea,” which launched her Broadway career in 1959 (not to mention that of its relatively unknown star, Carol Burnett). The story line certainly fit her own life: The princess, she writes, “has to outwit a vain and icy queen to get what she wants and live happily ever after.” For Mary, the outwitting paid off. More than 50 years after its original run, her “Mattress” royalties still exceeded $100,000 a year. (If that seems impressive, consider this: Even into the 21st century, the Rodgers and Hammerstein families were each collecting $7 million a year.) As Mary used to say to friends as she reached for the check in a restaurant, “When your father writes ‘Oklahoma!’ you can pay for dinner.” Green notes it was a line she used frequently “because it acknowledged the awkwardness of the situation and swiftly walked straight through it.” Pure Mary.

But what is also pure Mary, I became convinced, lies beneath her slashing revelations and dishy anecdotes: an inescapable element of rue, particularly regarding her parents. After one notably acidic snipe at Dorothy, Mary writes, “It was too late to go back — it always is.” And Dick? “It was all about his music; everything loving about him came out in it, and there was no point looking anywhere else. It’s also true I didn’t have any choice — but it was enough.”

Dick and Dorothy are dead, and Mary’s dead as well. Their legacies, though mixed, are intimately entwined. Although I’m still looking for something to like about Dorothy Rodgers, I’ll acknowledge that Richard Rodgers left behind some songs I love. But Mary Rodgers left behind this book, which I love even more.

On the other hand, I never quite found out why she despised Arthur Laurents.

Daniel Okrent, the author of “Last Call” and “The Guarded Gate,” is writing a book about Stephen Sondheim.