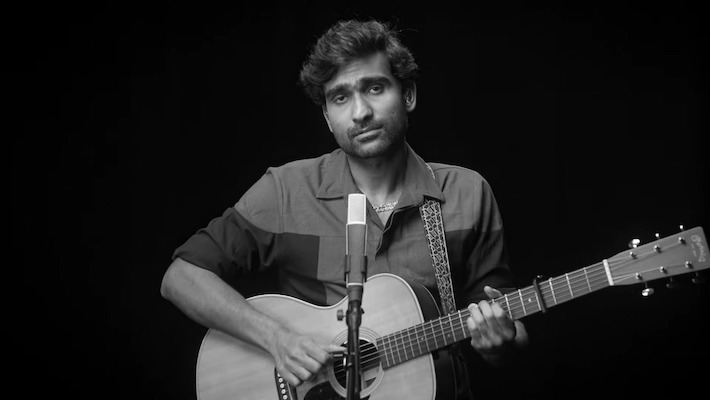 The Eye features music’s best rising artists in a bare-bones studio space to perform renditions of their top songs with only one camera, one microphone, and one take. Featured on the latest installment is Prateek Kuhad, a quickly ascending Indian favorite.

Kuhad only started playing guitar in his late teenage years and honed his craft throughout high school and his time at New York University. The singer-songwriter later returned to India and launched his career and did well early, winning the Best Indian Act award at the 2016 MTV Europe Music Awards off the strength of his 2015 debut album In Tokens And Charms. His breakout hit, “Cold/Mess,” even found its way onto Barack Obama’s list of favorite songs of 2019. In 2020, his songs, and the angelic voice with which he sings them, landed him a deal with Elektra Records, making him the first Indian artist ever signed by the storied and long-running label.

Now, he finds himself performing for The Eye, turning in three minimal performances for the session of “The Last Time,” “Just A Word,” and “Co2.”

Armed with just an acoustic guitar, Kuhad goes through “The Last Time” by playing a finger-picked melody to set the table for his undeniably pure and beautiful voice. He goes about the other two songs in pretty much the same way because the approach isn’t one that needs tweaking. Kuhad’s vocals are a world-class asset worth putting front and center, so The Eye turned out to be an ideal showcase for them.

These songs have really helped Kuhad establish his identity on a larger scale: In an interview with The Line Of Best Fit from earlier this year, he said, “Even just six, seven years ago, it was a completely different situation. I would actually get asked in an interview if I could play the sitar, and now that doesn’t really happen anymore. I think people are more informed in the past few years.” He also noted of his latest album, this year’s The Way That Lovers Do, “Listening to it top to bottom is really quite an experience.”

Watch Kuhad perform “The Last Time,” “Just A Word,” and “Co2” for The Eye above.