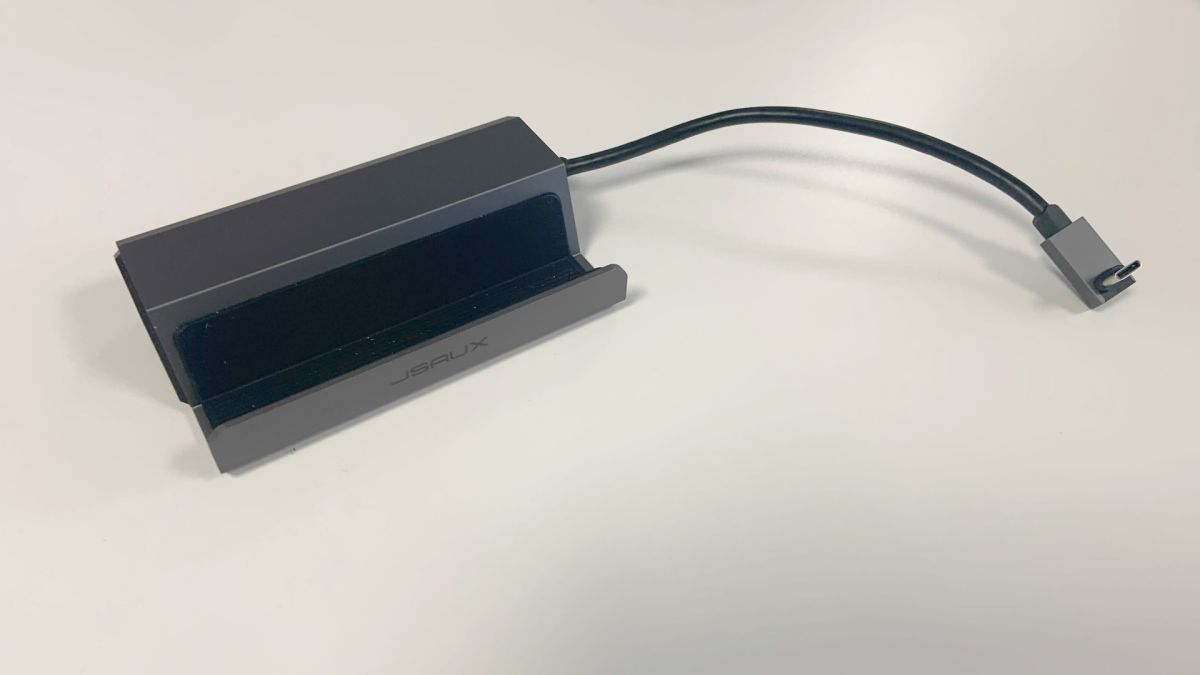 I’ve always had a soft spot for Jsaux. Its tough, braided USB cables have seen me right for years, and now the company has deigned to bring us an alternative to the official Steam Deck (opens in new tab) dock, while Valve is out twiddling its thumbs.

There are two versions of the Jsaux Steam Deck Dock: the standard HB0602 (opens in new tab), and the upgraded HB0603 (opens in new tab) which primarily improves on the USB port specs. Sadly, both suffer with limitations when it comes to ethernet speeds, but we’ll get to that in a moment.

For the most part, the Jsaux dock is a sturdy, good-looking piece of kit. I love the gunmetal grey, and it does a great job of presenting the Steam Deck in style. Nested in its little silicon-lined nook, the Deck doesn’t slide about if you’re moving it from one surface to another, and the cable is just the right length so it reaches the Deck’s charge port, with enough slack to take the Deck out while keeping it plugged in.

It’s clear Jsaux has put durability as a top priority with its Premium Aluminium Alloy frame, though there is a bit of a hollowness to the body. My main concern here are the metal corners, while mostly rounded, are frighteningly close to my Steam Deck’s screen. Maybe I’m just a worrier.

At least I know when I get a puppy it’ll have a tough time chewing through this dock.

As for connectivity, while the official Steam Deck dock will offer HDMI 2.0 and DisplayPort 1.4, Jsaux has opted to supply up to 4K resolutions at 60Hz through a single HDMI 2.0 output. The majority of use cases won’t warrant 4K as the Steam Deck is likely to struggle at those resolutions.

Of course you can always play at a lower resolution and use AMD’s Fidelity FX Super Resolution (opens in new tab) tech to upscale, if you’re using the Jsaux dock with one of the best 4K gaming monitors (opens in new tab). Sadly, though, you won’t be able get full use of the Steam Deck as a portable 8K+ movie player with this dock. If you’re just looking to use it as a portable workstation, though, the Jsaux dock has you covered, though an extra USB port or two might have been nice.

There is a USB Type-C available which charges up to 100W (the Deck only needs 45W) so there’s some leeway for charging peripherals. Though, again, another port would have been a great addition so you could charge and have something else plugged in there. To free one of these ports up, you might consider connecting the dock to a monitor with a USB Type-C downstream (for charging and image output), but it’s important to note that the DisplayLink chipset in a lot of monitors isn’t supported on Linux as of yet.

For some strange reason, Jsaux has sent me the cheaper $40 (£35) version of the dock with its dual USB 2.0 ports, as opposed to the $50 version with three USB 3.0 Type-A ports. My main question is this: why would I bother skimping for such a downgrade? As our Dave says, “There’s no place for USB 2.0 on any new PC dock in 2022,” which is exactly why Valve delayed the official Dock to upgrade to USB 3.1 (opens in new tab).

What we do know is the Jsaux dock is limited to 100Mbps ethernet. For reference, it takes around 5 minutes to download a movie in 1080p at those speeds, so you can imagine how long it might take to download the full size of some of today’s games (opens in new tab). For some users, this limitation will negate the need to jam an ethernet cable in there; your Wi-Fi may even be faster if you’re paying for more than 100Mbps.

Setting the ethernet and USB limitations aside, there’s still a lot to be said about a company that released a sturdy, stylish Steam Deck dock, before Valve managed to bring us an official one.

But, it’s definitely worth spending that extra $10 on the HB0603 (opens in new tab) instead, especially as there’s a bit of noticeable input latency when using those USB 2.0 ports to play games. While we’re betting on the official dock being around $50 or less, we’ve still no idea how much it’ll cost. The $50 HB0603 with its USB 3.0 ports may yet be better value, but if the official Dock is anywhere near that price on launch, and can boast better ethernet speeds, that’s certainly where I’ll be spending my money.