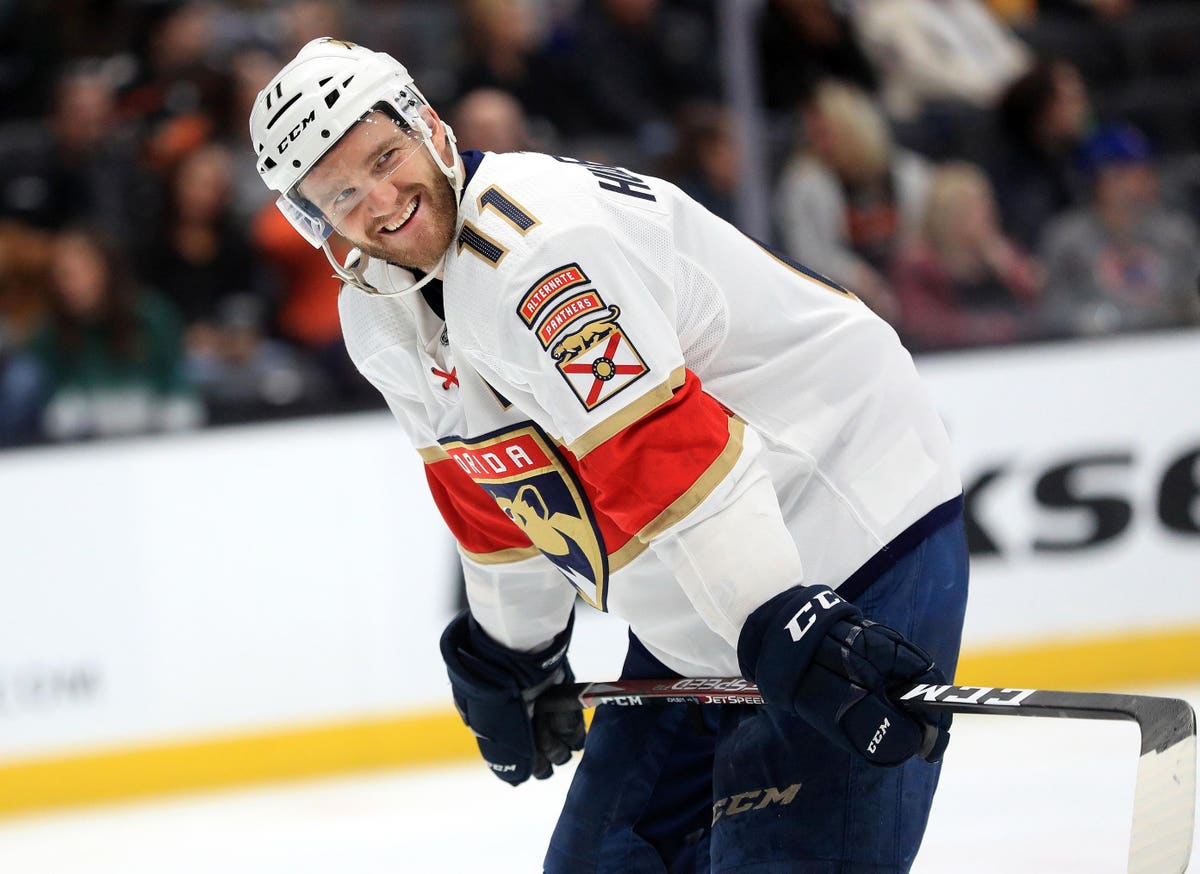 The contract will take effect at the beginning of the 2023-24 season, and will run through 2030-31, when Huberdeau will turn 38. According to PuckPedia, the deal carries a no-movement clause throughout, and a full no-trade clause for the first six years. Huberdeau can submit a list of 12 approved trade destinations in the final two seaons of the deal.

It’s a swift and tidy bit of business for Calgary general manager Brad Treliving. He watched his organization take two body blows earlier this summer when first-line forwards Johnny Gaudreau and Matthew Tkachuk both opted out of long-term futures with the organization.

First, Gaudreau spurned a big-money offer from Calgary to sign with the Columbus Blue Jackets as an unrestricted free agent on July 13.

Then, with his back against the wall after Tkachuk declared that he was not interested in signing a long-term contract extension, Treliving pulled off a rare NHL sign-and-trade on July 22. He inked his 24-year-old winger to an eight-year deal that takes effect this fall, with an average annual value of $9.5 million per season. Then, he dealt Tkachuk to the Florida Panthers for a four-piece package: Huberdeau, defenseman MacKenzie Weegar, forward prospect Cole Schwindt and a first-round pick in the 2025 draft.

With Huberdeau and Weegar both just one year away from unrestricted free agency, Treliving was running the risk of possibly having to wait years to see whether Schwindt and that first-rounder would turn out to be a meaningful trade return if his two present-day stars decided not to stick around.

Instead, he has now locked up the NHL’s 2021-22 assists leader (85 assists), who tied for second in league scoring with Gaudreau (115 points) and who finished fifth in Hart Trophy voting for league MVP, just behind Gaudreau.

“We are excited to extend Jonathan long term in Calgary,” said Treliving in the team’s statement on Thursday night. “He is an elite player, one of the premier forwards in the league who makes players around him better. We look forward to welcoming Jonathan to our community and his contributions to our team’s success.”

As a playmaker, Huberdeau matches if not exceeds Gaudreau’s dazzle. His commitment also helps mute the narrative that Gaudreau and Tkachuk’s departures had fuelled: that star players didn’t want to stay in Calgary for the long term.

Originally drafted third overall by the Panthers in 2011, Huberdeau won the Calder Trophy as the NHL’s rookie of the year in 2012-13. Then, he endured some lean years before the Panthers started to put the pieces together. He hit a then-career high of 92 points in 2018-19, but had appeared in just one playoff series before the 2020 bubble, where Florida was eliminated in four games in the preliminary round by the New York Islanders.

In 2020-21, the Panthers climbed to second place in their division, but suffered a first-round postseason loss to the Tampa Bay Lightning in a hard-fought series. Last season, they led the league points (122) and goals (337), and won their first playoff series since 1996 when they eliminated the Washington Capitals. But they went out meekly in the second round, swept by the Lightning in a four-game series where they scored just three goals.

The Flames also had a strong regular season — rebounding from a playoff miss in the all-Canadian North Division in 2020-21, which saw them bring back coach Darryl Sutter at mid-season for a second tour of duty.

Sutter’s teams are built on a foundation of defense, and Calgary seized first place in the Pacific Division with 111 points in 2021-22 thanks to the third-fewest goals allowed in the league (206). The Flames also finished sixth in scoring, thanks largely to the explosive force of their first line. Wingers Gaudreau and Tkachuk flanked center Elias Lindholm, and all three hit the 40-goal mark.

But the Flames’ playoff journey also ended with a thud. After squeezing past the Dallas Stars in a seven-game first round defined by the heroics of Dallas goaltender Jake Oettinger, Calgary collapsed defensively while falling in five games to their inter-provincial rival, the Edmonton Oilers.

This fall, Huberdeau will get a chance to line up with Lindholm, while Weegar adds another impressive weapon to the Flames’ already-stacked blue line.

Treliving reportedly went the extra mile to establish an immediate rapport with his newly acquired offensive ace. According to Huberdeau’s agent, Allan Walsh, the two had dinner together earlier this week in Montreal, Huberdeau’s offseason stomping grounds.

Huberdeau will make only a hair more than that. He’ll play next season on the last year of the deal he signed in Florida in 2016, which carries a cap hit of $5.9 million.

And Treliving wraps up a challenging few weeks on a high note — with all his key players locked up and, according to CapFriendly, with a little less than $3 million in cap space remaining to fill out his roster depth ahead of opening night.

Could the Huberdeau contract feel like an organizational albatross in its final years? Very possibly. But give credit to Treliving for being aggressive, creative and solution-oriented when the tide turned against him this summer.

The Flames should still be a contender next season, and he has given his club’s fanbase good reason to stay engaged and keep watching.