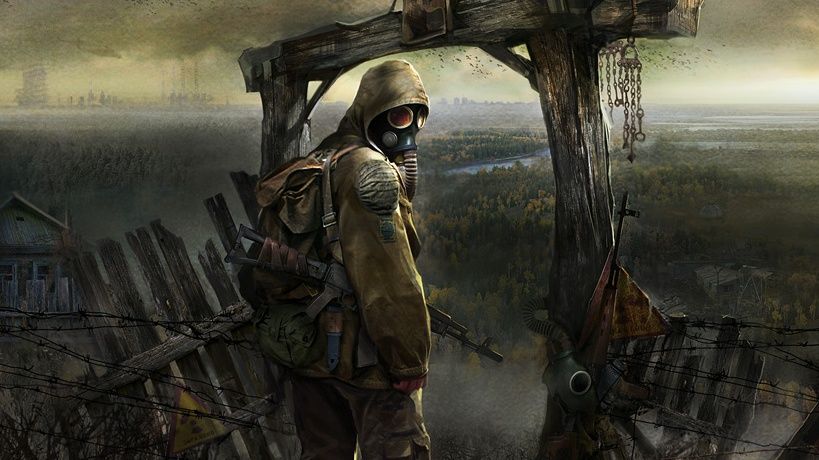 If you’ve lurked the Stalker subreddit recently, you’ve almost certainly come across a curious anomaly: a leaked build of a supposed console port of the original Stalker: Shadow of Chernobyl. Rumoured to be due to release shortly before Stalker 2, footage of the build shows the familiar classic in a slightly altered state: there’s no cursor in sight, there are controller prompts everywhere, and if that’s mouselook I’ll eat my hat. It all looks very legit and, while GSC refused to comment when PCG asked about it, this feels like too much work for even the most determined modder.

But it’s not this alien version of Stalker that’s interesting, it’s the document that accompanies  it. Written by a Russian streamer who goes by the names ‘Nevazhno, Kto’ and ‘Velichaishii’ (meaning ‘It doesn’t matter who’ and ‘The greatest’, respectively), the five page pamphlet is part confession, part manifesto, and outlines the how and why of his leaking the port.

“[GSC] cast off everyone who supported their game for 15 years and kept it alive,” writes Nevazhno, referring to what he perceives as mistreatment of Stalker’s Russian fans by GSC Game World—a Ukrainian company—since Russia’s February invasion of Ukraine. His list of their offences is comprised of eight incidents, and range from things like “Constant discrimination against Russians in [GSC’s] Discord server,” to anger over the money the company raised (opens in new tab) for the Come Back Alive Foundation, which helps train and equip Ukrainian troops. “The purchase of weapons and military equipment is not a charity event,” he writes, alleging that equipment provided by the Foundation was used in Ukrainian strikes on Belgorod (opens in new tab).

Nevazhno’s first complaint, though, is that GSC attempted to solicit donations for the Ukrainian army from Russian players—a crime in the Russian Federation—without making them aware of the potential legal consequences. “This was an attempt to make bargaining chips out of Russians,” he writes, “The only mention of criminality came when people began to complain about this shit to Roskomnadzor” (the Russian agency responsible for monitoring mass media).

I reached out to GSC Game World to ask them about that, and they told me that, “We have been publishing pleas to help Ukraine in our social media and on our web resources—just like thousands of other Ukrainian companies… Nonetheless, an important thing to mention is that we also added a clarification about the donations from Russia later on. We think we might be in the absolute minority—if not the only ones—to do so”.

I was curious about Nevazhno’s reasons for targeting GSC in particular—rather than any other Ukrainian game company that’s raised money for the country’s military—and hoped I could get him to expand on where he obtained the leaked build of Stalker’s console port.

Regarding the build’s provenance, Nevazhno didn’t have much more to say beyond what he wrote in the original document, where he hinted that it had come from GSC employees upset about the company’s attitude to Russian players. GSC strongly denied this in my correspondence with them, however, pointing out that a glut of personal employee information was leaked by the same group of Russian bloggers who have been circulating this build: it seems unlikely anyone in their office would feel comfortable leaking that kind of material.

But Nevazhno wrote at length and in depth about his motivations, and they mirror the feelings of isolation and fraternal betrayal that are now common among Russians with regards to the Ukraine conflict. “My entire [YouTube] channel is built on Stalker… working with audio, with video, my interest in game development—it all started with this game,” Nevazhno told me. But when he felt that Russian players were being unfairly mistreated—in particular GSC’s attempts to solicit donations from Russian fans—he felt “it was not possible to maintain neutrality”. He tells me that he feels western media only presents a one-sided view of the war in Ukraine but, even if he accepted that interpretation, he “did not take up arms, did not kill anyone, and did not march into a foreign land… but [GSC] seems to have a different opinion”.

In our communication, Nevazhno presents himself more as a heartbroken fan than a frothing nationalist, but GSC’s Zakhar Bocharov reminds me that leaks such as these—both of Stalker’s console port and of GSC employee information—are “accompanied with calls for bullying and death threats” which have been an ongoing fact of life for people at GSC since the war began. Regardless of Nevazhno’s disappointment at the treatment of Russian Stalker fans, it’s an unavoidable fact that leaks such as these—in which he feels completely justified—add to an already intense mental burden for game developers in a country at war. Whether intending to or otherwise, Nevazhno has turned GSC’s own work into a cudgel to be used against them in a conflict they didn’t ask for.

I asked Nevazhno if he intended to leak more info from GSC, or if this would be his final act regarding the company. “I hope that everything ends with this,” he wrote, “It doesn’t matter how I got it, what’s important is that I didn’t lie, and this is not some fan mod… this leak was made out of a desire to achieve justice, which I saw in revenge by any means at all. This was a cry from the soul”.

It’s grandiose rhetoric, so much so that you might accidentally forget the subject under discussion is a leaked console port of a PC game from 2007, and that the people who will be afflicted and affected by it are not enemy combatants but a team of developers. I don’t doubt that Nevazhno’s feelings of heartbreak and betrayal are genuine, but they hardly seem to justify his his subsequent actions. He concluded his email to me with a plea to GSC Game World to change their attitude regarding Russian players to a more positive one: I am not convinced this leak was the best way to go about achieving that.

As for GSC, those developers that aren’t fighting continue to work on Stalker 2 (opens in new tab) in offices removed from the warzone. Bocharov tells me that the strain of working at war, and of confronting the fallout of leaks such as these, are an “inherent part” of the dev’s lives now. Nevertheless “We still believe in the best—for our game, our country and the whole world”.