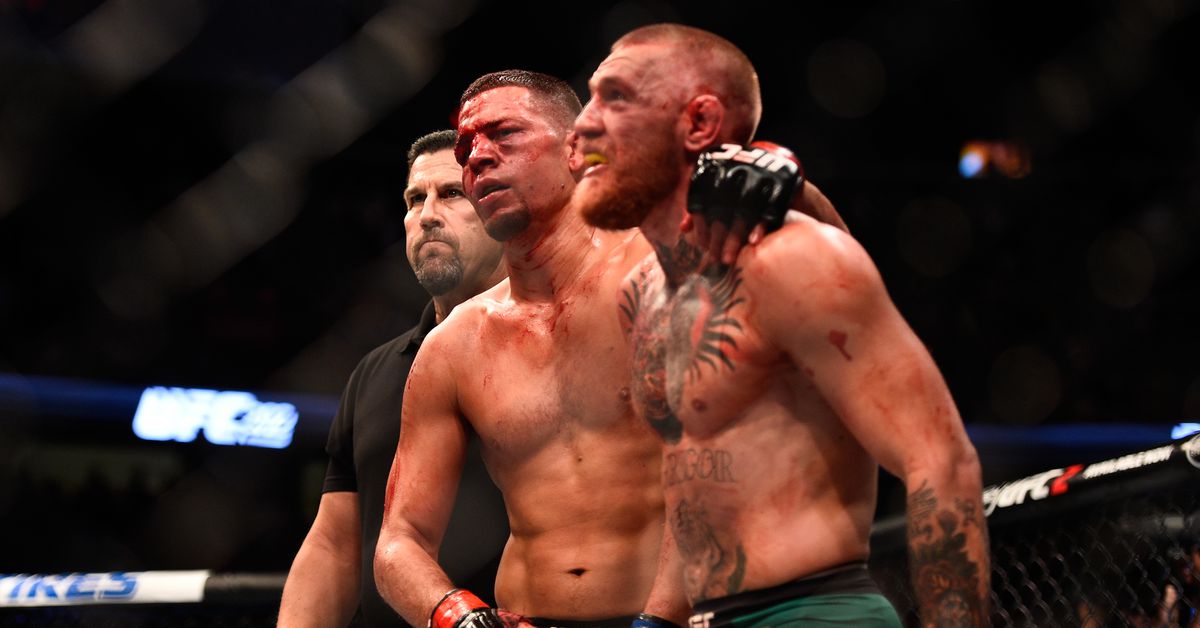 Conor McGregor knows a thing or two about avenging an unexpected loss with an epic battle in a rematch.

Thanks to his own wars with Nate Diaz, the former two-division UFC champion had nothing but praise for Amanda Nunes and Julianna Pena after they laid it all on the line in the UFC 277 main event on Saturday night.

After he was upset by Diaz back in 2016, McGregor came back better than ever to win the rematch five months later at UFC 202. Now Nunes has done much the same after she suffered a shocking loss to Pena this past December and then delivered a jaw-dropping performance to reclaim her bantamweight title in the second fight to cap off the latest UFC pay-per-view from Dallas.

“It’s mad to me the similarity of [the Amanda Nunes vs. Julianna Peña rematch] to the McGregor-Diaz fights,” McGregor said on Twitter. “Fight number one, the highly touted, the GOAT of the sport, me, Amanda Nunes, just sheer toughness, willingness to fight and caught off guard. Gives a couple of shots, then eats a couple of shots, then the tide turns, then gets choked.

“Now the return, the rematch, confidence on the other side, tenacity, toughness, all that still there. More focused work on Amanda Nunes’ side, my side [against Diaz].”

The similarities don’t stop there because McGregor didn’t forget that Pena copied Diaz’s post fight speech from their fight at UFC 196 when she dethroned Nunes to become champion for the first time.

Nunes then exacted her revenge with a lopsided win in the rematch after scoring multiple knockdowns in the early rounds and then mauling Pena on the ground during the second half of the fight.

While McGregor vs. Diaz 2 was much closer than the rematch between Nunes and Pena, the Irish superstar definitely saw a lot of the same tendencies play out between the two fights.

“And then, the fight goes the exact same way in the second fight. Dropped multiple times, just better prepared, cracks the shots, gets the drop multiple times. But then the toughness is still there, [Peña] still in Amanda’s face, [Diaz] still in my face.”

McGregor’s rematch against Diaz has been hailed as one of the greatest fights in UFC history and he believes the rivalry between Nunes and Pena will be remembered with the same kind of reverence.

Nunes and Pena are now tied at one win a piece, which could eventually lead to a third fight between them in the future.

Sadly, McGregor and Diaz never got the opportunity to meet again after they split a pair of fights in 2016 and by all accounts, the trilogy now seems highly unlikely to happen. Diaz is currently scheduled to face Khamzat Chimaev in the UFC 279 main event in September in what will serve as the final bout on his contract with the promotion.

Diaz has said rather emphatically that he plans to leave the UFC afterwards with potential opportunities available to him outside the organization including a possible boxing match against Jake Paul. With McGregor still part of the UFC roster, that will likely prevent him from crossing paths with Diaz again — at least in the immediate future.