FRED received a red card for STAMPING on Alvaro Morata in a forgettable pre-season friendly for Manchester United.

The Brazil international was given his marching orders in second-half stoppage time for a sickening stamp on the Atletico Madrid hitman in Saturday afternoon’s clash in Oslo.

Fred hacked the former Chelsea man to the ground before jumping in the air and stamping on his thigh.

The midfielder tried to plead his innocence but was shown a second yellow by referee Espen Eskas.

United fans were quick to comment on the 29-year-old’s dismissal, with one saying: ” Fred was our MOTM by far.

“Clumsy tackle and a deserved card at the end though.” 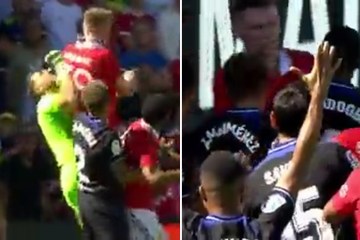 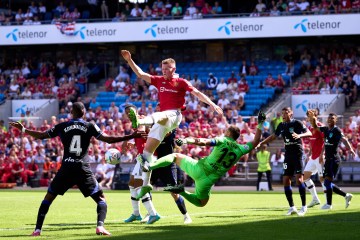 Another one: “Fred and Maguire as starters in that MUFC team will always bring the same old result!”

And another one said: “Fred the red by name and nature it seems.”

One remarked: “Fred the Red.”

Another chimed in: “Despite the late red card Fred had a generally good performance.”

United suffered a 1-0 defeat to the La Liga giants courtesy of an 86th-minute winner from Joao Felix.

The defeat in Oslo was the first of Erik ten Hag‘s reign as Old Trafford chief.

The Dutchman was relishing the test Diego Simeone’s dogged side would provide his troops ahead of next Sunday’s Premier League opener.

He said: “This is the last test, so we want to get the players to get the minutes in their legs, and of course you want to see a team performance.

“This is a good test because it’s a difficult opponent, really tough to play [against].

“So I am really looking forward to what’s [coming] out of this test.”

“The majority has to play 90 minutes because that is what you want when you go into the league, so this is the purpose of these two games.”