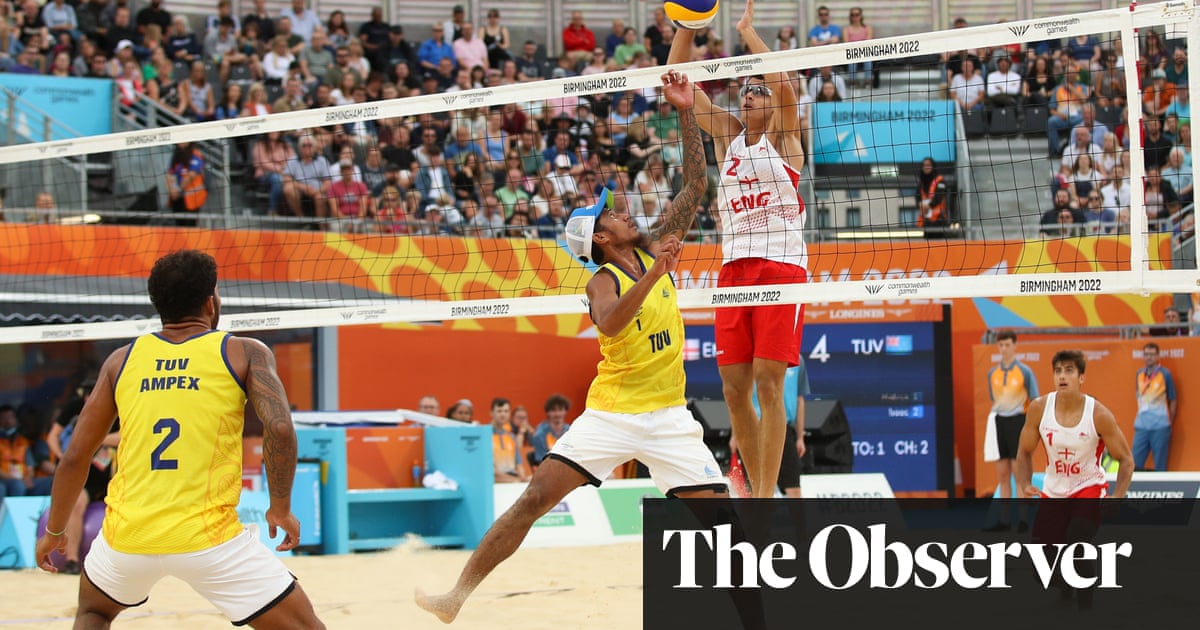 The Commonwealth Games are renowned for some of the biggest sporting nations competing side-by-side with countries that rarely have the opportunity to display themselves on the international stage. But even by those standards, the opening of the beach volleyball was a sight to behold.

Standing before Javier and Joaquin Bello, England’s world No 60 beach volleyball team, were Ampex Isaac and Saaga Malosa from the islands of Tuvalu. The 4,000 spectators encircling them were equivalent to around 35% of the population of Tuvalu, the third-least populous independent country in the world with 11,000 inhabitants. “We’re not used to it,” said Isaac.

Their path to this moment was unique. Isaac, previously an indoor volleyball player, had joined forces with Malosa two months ago. They were bronze medallists at the Pacific Mini Games in June, a multi-sport event among the smaller territories in Oceania.

They have had a few training camps in Australia, but back home in Tuvalu, not a single beach volleyball court existed. “We have beaches but they are sloped,” said Isaac. “We didn’t really manage to get a court until last month when we were coming to the Games.”

Merely having a place to train is a common obstacle for any aspiring athlete in Tuvalu, a group of islands in the Pacific Ocean between Hawaii and Australia. For other athletes, such as the rest of their five-man squad, the main sporting base is the runway of Funafuti International Airport, the only open space in the archipelago. Since it receives two planes a week, the runway becomes filled with young people playing football, rugby and enjoying life. The athletes carve out their own space to train among the population.

Their joyful presence in Birmingham is paired with the stark reality of their country’s predicament: Tuvalu is in harm’s way as the climate emergency approaches. The island sits three metres above sea level and scientists predict that they could be submerged in 50-100 years. At Cop26 last year, Tuvalu’s foreign minister, Simon Kofe, recorded a speech standing knee-deep in the ocean off Funafuti, the capital, to highlight the problem. “We are sinking,” he said.

Over the past few decades, the climate crisis has altered the way of life in Tuvalu considerably. Rising sea levels mean that saltwater submerges its soil, forcing the island to import most of the food it consumes. Temperatures have risen and storms are more forceful, but rainfall, which provides the majority of Tuvalu’s drinking water, is decreasing. Ciguatera poisoning from fish that ingest micro-algaes has increasingly become an issue.

The country’s inhabitants have had to come to terms with its stark future and some of the squad see their presence as an opportunity to draw attention to their predicament.

It is also a reminder of the facade of fairness in international competition. Sport is no meritocracy when there are enormous disparities in wealth and facilities, the significant funding and top-class facilities of athletes from countries such as Britain and Australia deeply contrasting with the playing conditions for many others.

But it is an opportunity. On the court, they took it, remaining competitive until the end against a distinguished professional pairing. The Tuvalu duo played with smiles on their faces, fist-pumping their successes and encouraging each other throughout.

Charged with finishing the majority of their attacks and manning the forecourt, Isaac continually showed off his guile, deftly manipulating the ball around the court.

Tuvalu kept the contest tight at the beginning and enjoyed their best spell in the second set, pulling the score back from 4-10 to 9-11 and attracting cheers and support from the crowd. They lost 21-10, 21-12 and departed with their smiles still intact.

“This is a really important part of us. Representing our small population. We are not even representing Tuvalu but the whole Pacific Islands,” said Isaac.

Before the Tuvaluan pair arrived in Birmingham, they knew almost nothing about the city. Isaac chuckled as he noted that he knew Aston Villa, but not Birmingham. By the time they left the arena they had learned enough: rain began to fall over the temporary stadium, coating the thick sand of the makeshift beach.