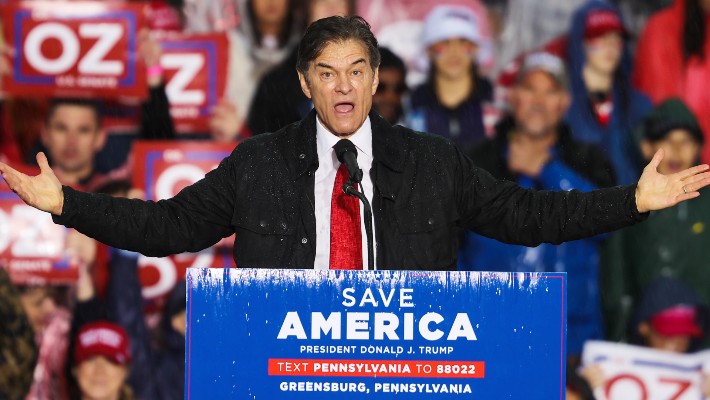 John Fetterman may still be recuperating from a stroke, but that doesn’t mean he can’t campaign. The current lieutenant governor of Pennsylvania is running for the state’s soon-to-be-vacated Senate seat, and while he’s on the mend, he’s been able to attack his opponent, Dr. Mehmet Oz, online. Fetterman is very good at social media. Oz is not. Not only has the former TV star been repeatedly humiliated, sometimes by celebrity guests, but he’s also trailing in the polls. And that’s got the GOP is worried.

Sources tell Puck that Donald Trump, who enraged some of his base by supporting Oz, is now complaining to his Fox News bud Sean Hannity about his poor performance. Hannity was the one who coaxed Trump to endorse him in the first place, and throw in the fact that Hannity hasn’t had Trump on his show since April, he must be hopping mad.

Trump’s not the only one pissed. After Oz went abroad instead of campaigning, a number of people in the GOP were aghast. “No one can believe that he took a damn vacation at the end of June, after only coming back to the state on June 10,” a Republican strategist told Puck. “He screwed up with that video that was from his New Jersey house instead of Pennsylvania house. It’s really bad.”

What’s more, Politico reports that Oz’s lackluster polling and fundraising have led to panic amongst the National Republican Senatorial Committee. On a recent donor call, NRSC officials tried to mollify concerns by pointing out they may be able to flip the Senate, currently split 50-50, without Oz. Then again, they still have to defend critical seats in Wisconsin and North Caroline, all while trying to flip states like Arizona, Georgia, Nevada, and New Hampshire.

In the meantime, Oz is out there on Twitter, getting dragged over his use of a Lost meme…by a co-creator of Lost himself.

(Via Puck and Politico)