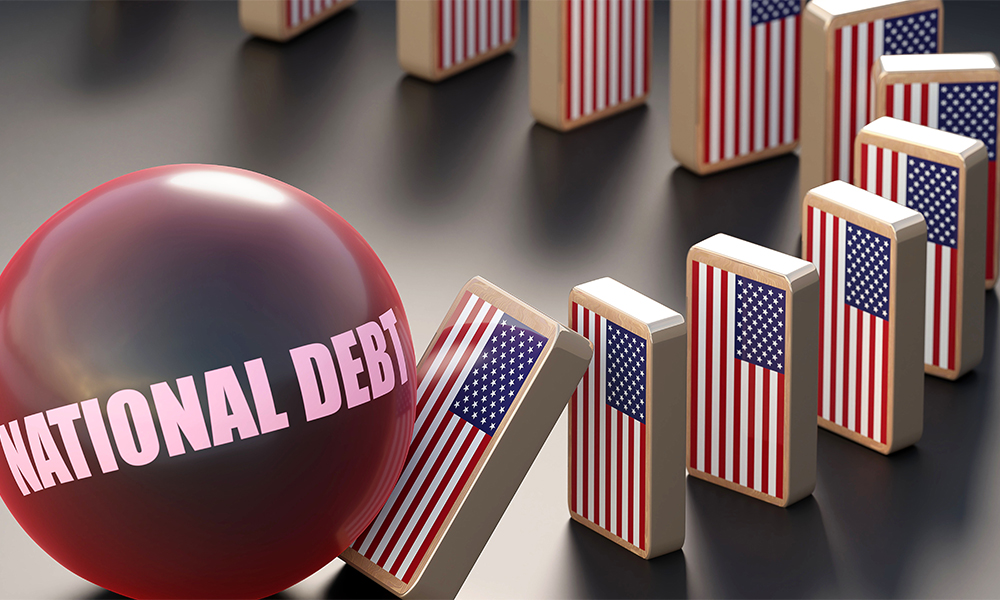 You may liken today’s economy to an overswollen tick, obese with blood.

Rather than blood, the economy is obese with debt.

Like our ludicrously engorged arachnid, the economy cannot much expand. It is impossibly loaded down… groaning under the burden… horribly swaybacked.

The economy will continue to wallow — unless it can shake off the weight. But how can it?

Today we blow the dust off an ancient solution and polish it up for the 21st century.

It may flabbergast and stagger you. You may laugh it out of court.

But it may offer the only way out. What is it?

How can the economy unload the gargantuan debt load that saddles it, hagrides it and torments it?

Obscene debt obligations such as these cannot possibly be met. And debts that cannot be repaid… will not be repaid.

Nor can the nation possibly “grow” its way out of this debt.

Again we ask: Is there a way out? Can the economy unload its impossible cargo of debt?

One way out is hyperinflation on the scale of a Venezuela.

Inflation lightens debt’s burdens, while hyperinflation rinses them away altogether.

But hyperinflation is a very rough medicine — worse than the ailment it would cure.

Is there another way out?

In theory — in theory — there is. But we must furl back the scrolls of time… to the early morning of civilization.

Here is the answer: a debt jubilee.

That is, the mass forgiveness of debt.

Heave the ledger book into the fire. Run a blue pen across the red ink. Wipe the tablet entirely (or largely) clean.

The practice began some 5,000 years distant in ancient Sumer and Babylon. A new king would delete the people’s debts.

Was it because the new king was a swell fellow? Or because he was a tribune of the proletariat, an ancient Karl Marx?

No. He cleared the books to preserve his hide. He was alert — keenly — to social stability.

Economist Michael Hudson is the author of …And Forgive Them Their Debts. From whom:

The idea was to restore the economy to the stability that existed before widespread debts ran up during the preceding ruler’s reign. What was “restored” was an idealized “original” or “normal” state in which nobody owed debts to the palace…

The idea of debt amnesties was to prevent debt from tearing society apart — to prevent the kind of crisis that the United States has been in since 2008, when President Obama didn’t cancel the junk-bond debts or the debts that tore the Greek economy apart —  when the IMF and Europe imposed them on Greece instead of letting it default on debts owed to French and German bondholders.

Even in the normal course of economic life, social balance required writing off debt arrears to the palace, temples or other creditors so as to maintain a free population of families able to provide for their own basic needs… Societies that canceled the debts enjoyed stable growth for thousands of years.

The debt jubilee was smuggled into Judaic law and the Bible. Every 50th year would be a jubilee year, says Leviticus:

Clearing away all the dead weight sitting on the economy is perhaps the way to renewed American prosperity.

The economy can then proceed on solid foundations of capital, unencumbered and unbridled by debt, a stallion out from the barn.

Of course, any such jubilee would bring consequences. It would peel back the lid on a can of wriggling worms…

What about all the creditors a jubilee would clean out? Not all are villain Wall Street banks. Must the honest creditor go scratching?

And what of moral hazard? Who would not load up on debt?

After all, someone will one day lift it from your shoulders.

And who would loan anyone money at all — knowing one day he may be fleeced, dragooned and clubbed — and holding an empty bag.

That is, a debt jubilee would shatter the delicate balance between creditor and debtor.

In conclusion, we expect no jubilee of the sort here envisioned.

Yet it may just be the least poor option of all…