DARWIN NUNEZ showed Erling Haaland how it is done as his late header saw Liverpool get one over rivals Manchester City in the Community Shield.

On a day where the anticipation to see City’s new No.9 at the King Power was high, Nunez came off the bench to ensure he made his mark in this Premier League curtain raiser.

Trent Alexander-Arnold initially gave Liverpool a 21st minute lead before Julian Alvarez came off the bench to equalise for City in the 73rd minute.

Yet with seven minutes remaining, Mohamed Salah stepped up to steal the show as VAR intervened to show Ruben Dias had handled Darwin Nunez’ close-range header.

And in injury time, Nunez then made sure of the result with a cute flick-on from two yards out.

Jurgen Klopp’s Reds look fresh and ready to win back the Premier League title off City, with Salah back to his rampaging and mesmerising best and Nunez impressing. 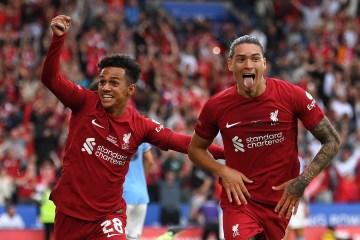 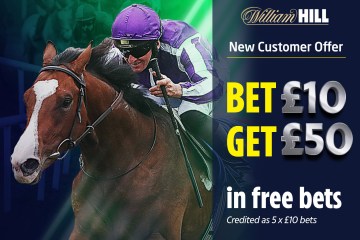 City meanwhile will not be too worried, despite Haaland failing to net on his first competitive outing for his new club – including a late howler with an open goal gaping.

Pep Guardiola’s men are traditionally slow starters in Prem campaigns, and were the same here with a mixed performance in Leicester – the first Community Shield away from Wembley for a decade.

Haaland started up top with Jack Grealish, while Nathan Ake partnered Ruben Dias in the centre of defence.

Jurgen Klopp went for a strong line-up as well, with only Adrian replacing the injured Alisson in goal and new-boy Darwin Nunez took his place on the bench.

Skipper Jordan Henderson made his 450th appearance in all competitions for the club.

Salah got an early chance to terrorise Joao Cancelo down the right flank after a brilliant sprayed ball by Fabinho from deep.

The Egyptian danced past Cancelo but fired his effort into the side-netting.

The side-netting at the King Power got a good work out in the opening stages as Kevin De Bruyne and Andy Robertson both tested its mettle with a shot and header.

But Liverpool were looking the more deadly, and got their rewards as Salah this time pulled it back from Alexander-Arnold on the edge of the box.

The first-time effort was flicked on by Ake, taking it past Ederson and in off the post.

City were struggling to create any clear-cut chances before Haaland finally got in the game 10 minutes before the break.

The Norwegian outmuscled Robertson, chested the ball down and fired low straight at Adrian before fluffing his lines from a Bernardo Silva cross soon after.

The half ended with Klopp fuming on the touchlines after a frustrated Cancelo left a boot on Alexander-Arnold.

Haaland only had eight first half touches, summing up his lack of influence on proceedings.

Pep waited until just before the hour mark to make changes – Phil Foden and Alvarez coming on for Grealish and Mahrez.

Klopp also switched things up as Nunez replaced Roberto Firmino, and the Uruguayan almost won his side a penalty straight away after being brought down by Ederson only to have been deemed offside.

Nunez was in the thick of things, and should have scored in the 65th minute only to be denied by Ederson from Henderson’s through ball.

Then, out of nowhere, City got back into the game with a scrappy effort born from a delightful chip by De Bruyne into Foden whose effort was parried by Adrian.

The ball squirmed out and Alvarez beat Joel Matip to bundle it home. It was originally ruled out for offside but a lengthy VAR check decided Foden had stayed onside.

But with 10 minutes remaining, Liverpool were given the chance to regain the lead as Nunez’ header appeared to strike the arm of Dias in the box.

Ref Pawson was ushered over to the monitor by VAR and quickly pointed to the spot. Salah already had the ball in his hands and beat Ederson despite the Brazilian diving the right way.

Salah was heavily involved in the third, crossing to the far post to find Robertson and his header back across goal was met by an instinctive Nunez.

Haaland had a late chance to get on the scoresheet only to hit the bar from a few yards out in front of an open goal after Adrian saved Foden’s low effort.