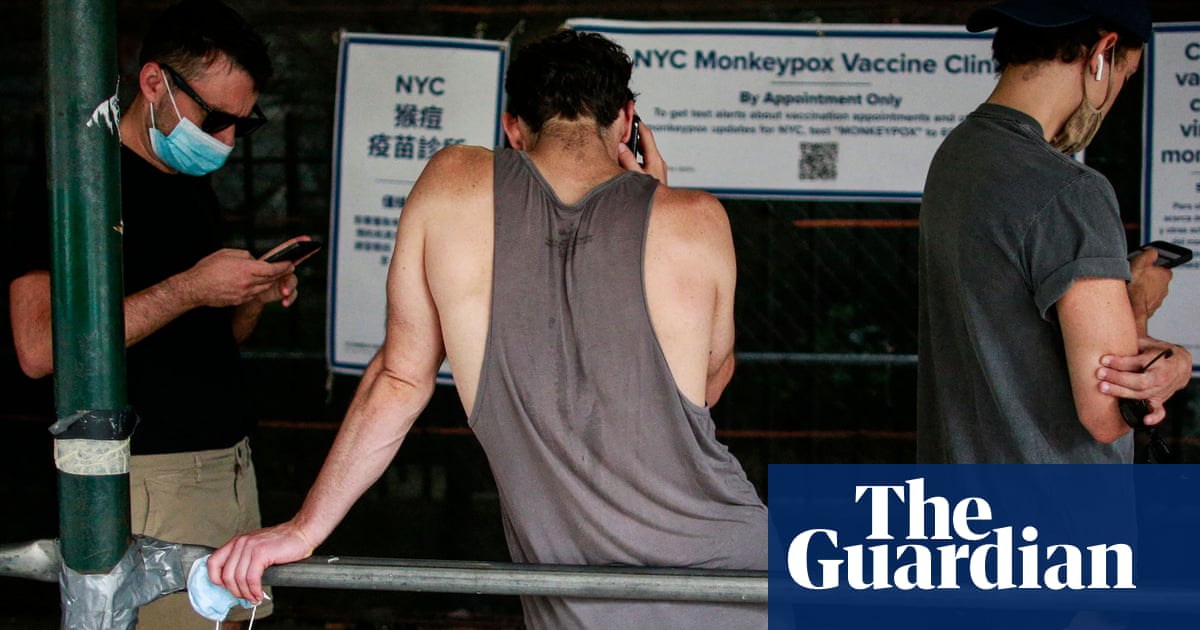 For 67-year-old Peter Madero, getting a monkeypox vaccination from the Chelsea sexual health clinic in Manhattan on Friday was a matter of staying protected amid increasing cases of virus as it spreads across the country and world.

But Madero admits that he was “one of the lucky ones”, successfully securing a vaccine after a month of waiting.

“Better to be safe than sorry,” Madero said. “Problem is, it’s hard to get it, and you have to go online, and then they only have so many.”

More than a quarter of all monkeypox cases in the US – 1,341 – are from New York state, with the majority coming from New York City. Furthermore, the US leads the world in confirmed cases – nearly 5,000 as of Friday, according to the federal Centers for Disease Control and Prevention.

Many have been clamoring to get a scarce number of available vaccination appointments. But getting vaccinated has proven to be a confusing process even for those who are eligible – namely, men who have sex with men and have multiple partners.

Daniel Enderle, 31, came to the clinic after hearing from a friend about available vaccine appointments.

Enderle hoped to get a shot by walking in for an appointment, but was turned away and referred by staff to the city health department’s online appointment portal.

Currently, anyone interested in getting the vaccine must go through the city’s health department website and make an appointment.

While all appointments have been filled through July, those eligible and interested are encouraged to check the portal for availabilities that open up because of cancellations, the New York Times reported.

Close contacts of those who have monkeypox will be contacted separately and receive instructions on how to make a vaccine appointment.

Enderle admitted he had not gotten a chance to research the process, but he said he hopes that public health employees find other ways to make the vaccination process more accessible, including creating walk-in appointments.

“Get behind it before it affects too many people,” Enderle said.

Michael Crawford, 57, said that while getting a vaccination appointment for monkeypox has not been as difficult for him, he has heard about the unreliable appointment process others are experiencing.

“My experience seems to be very simple,” said Crawford, who had help making his appointment. “Everything I’ve seen in the media seems to be disastrous so I’m confused as to why there are two such starkly different experiences.”

Complications around the vaccine rollout have also mirrored the stifled deployment of information on monkeypox as an illness.

To many, monkeypox has largely been characterized as a sexually transmitted illness that primarily affects LGBTQ+ communities, even though the illness can spread by people in close or intimate contact with someone else.

Enderle said that the characterization of monkeypox has brought on additional stigma.

“It’s subtle, kind of like, ‘Be careful when you hang out with the gays,’” he said.

Daniel Couri, who managed to get the vaccine, said the language used around monkeypox is similar to descriptors used during the HIV/Aids epidemic in the 1980s. “I don’t want it to be labeled as a gay disease,” he said.

Many believe that more needs to be done by public health officials to increase awareness of the illness and availability of vaccines, despite continued attention on the coronavirus pandemic.

“Get it together,” Crawford said.