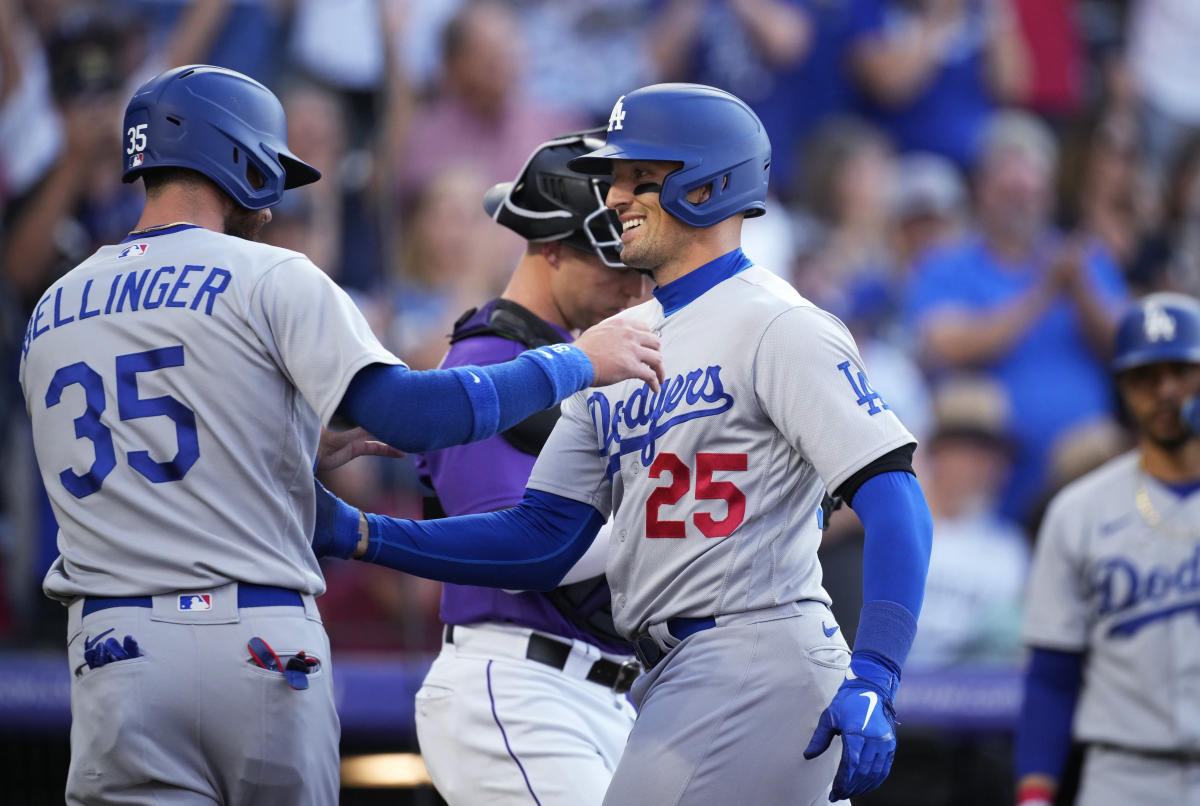 DENVER (AP) — Will Smith and Trayce Thompson each hit a two-run homer, Julio Urías pitched seven strong innings and the Los Angeles Dodgers continued their torrid July with a 5-4 victory over the Colorado Rockies on Friday night.

The Dodgers overcame 13 runners left on base and a shaky ninth inning by Craig Kimbrel to improve to 20-4 this month and 67-32 overall, both the best marks in the majors.

Smith added a single and reached base four times, while Urías (10-6) used a fastball-changeup-curveball mix to hold the Rockies to two runs and four hits. Urías has allowed three runs over 20 innings in his last three starts to lower his ERA to 2.71.

Evan Phillips struck out two in a hitless eighth before Kimbrel loaded the bases and gave up Randal Grichuk‘s two-run single. With Grichuk on second and two outs, Kimbrel got Ryan McMahon to foul out in left field to secure his 18th save.

Chad Kuhl (6-6), who threw a three-hit shutout the last time he faced the Dodgers on June 27, gave up three hits in the first inning. Smith’s 435-foot drive to left came on a 1-2 sinker.

Thompson jumped on a first-pitch sinker and his 430-foot shot to center made it 4-0. In the first two innings of the past three games, the Dodgers outscored Washington and Colorado 16-0.

José Iglesias doubled, Randal Grichuk tripled and Ryan McMahon hit a sacrifice fly in the second as the Rockies got within 4-2.

It was the closest Colorado got in its seventh loss in nine games, but the Dodgers wasted numerous chances to break it open. LA went 1 for 12 with runners in scoring position and left the bases loaded in the third and fourth.

Ryan Feltner, called up from Triple-A Albuquerque earlier in the day, got out of the fourth-inning jam. Kuhl lasted just 3 2/3 innings, allowing five hits and six runs with four walks and a hit batter.

Dodgers: 3B Justin Turner, who missed five games before returning Wednesday, was out a second straight day. “I think we’re out of the woods with his (abdominal) issue, but I think where we’re at, we don’t want to take any chances on any backsliding,” manager Dave Roberts said. “So I don’t see him playing any games here in Denver.” … RHP Blake Treinen (shoulder) threw a simulated inning at Dodger Stadium without issues. … RHP Dustin May (elbow) will throw four innings in his next rehab start for Triple-A Oklahoma City. … OF Chris Taylor (foot) is set for a rehab assignment next week. … Roberts said LHP Danny Duffy (hand) is throwing 92-93 mph in Arizona and could begin a rehab stint in a couple of weeks.

Rockies: In his second game in the field since being diagnosed with plantar fasciitis, LF Kris Bryant dropped Cody Bellinger‘s fly toward the foul line in the second that was ruled a double. Bryant went 2 for 4.

After starter José Ureña got just nine outs Thursday, the Rockies recalled Feltner and optioned RHP Justin Lawrence to Triple-A to add a fresh arm to the depleted bullpen.

Feltner was quickly needed and he was sharp, allowing three hits in 3 1/3 scoreless innings.

Max Muncy‘s batting average sat at .160 after he went 1 for 4 with three strikeouts. Roberts dropped him to seventh in the order and bumped the hot-hitting Gavin Lux, who had a third-inning sacrifice fly, to sixth.

“I’m going to continue to give him runway,” he said.

Trea Turner, who has played in all of LA’s 99 games, extended his hitting streak to 16 games with a first-inning single for his major league-high 125th hit. Dodgers teammate Freddie Freeman, who went 0 for 4 with a walk, ranks second with 123.

“Freddie keeps reminding me. He wants 200 hits and so do I,” Turner said.

The last teammates to finish in the top two in hits were Seattle’s Ichiro Suzuki and Bret Boone in 2001.