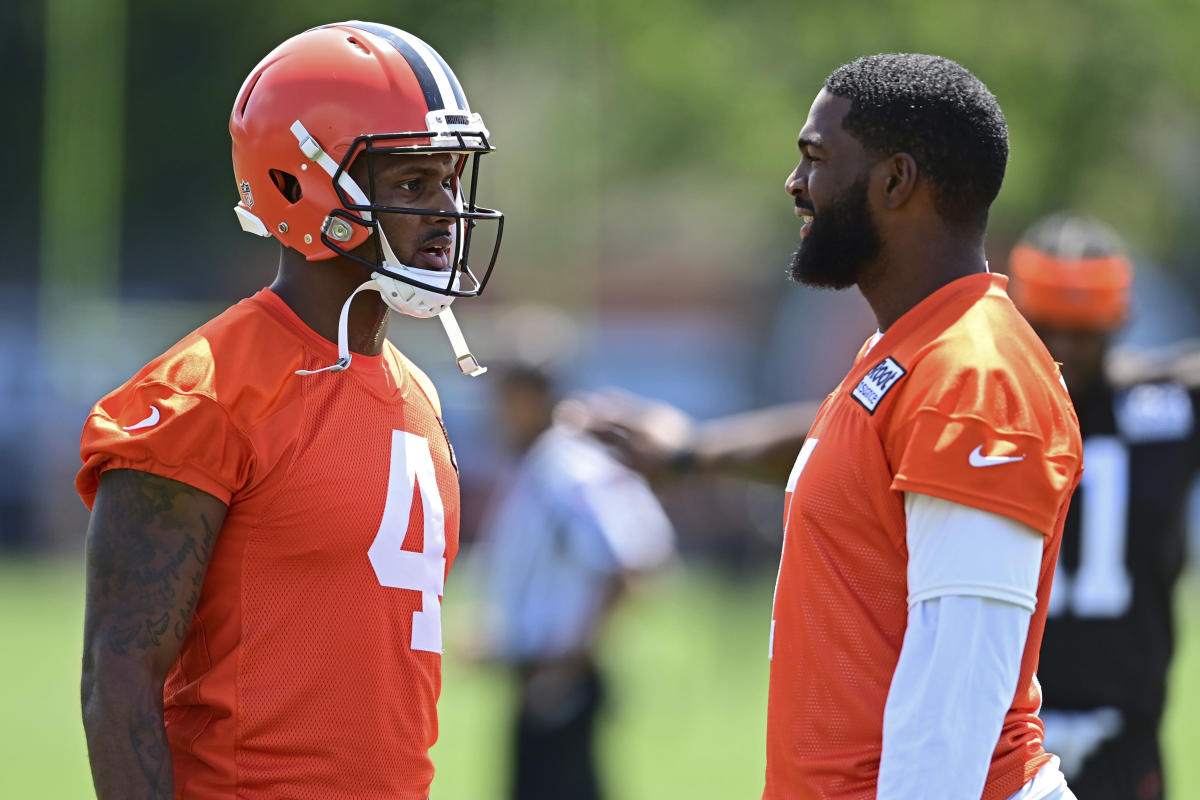 BEREA, Ohio (AP) — Deshaun Watson sprinted onto the field to a light round of cheers Saturday at the Cleveland Browns‘ first open practice of training camp.

Watson was the focal point as the Browns worked out in front of a near-capacity crowd at their suburban headquarters. He briefly waved while running to the middle of the practice fields, but did not speak with the media.

The 26-year-old quarterback is awaiting a decision from retired judge Sue L. Robinson. She’s determining if Watson violated the NFL’s personal conduct policy after being accused of sexual misconduct by 24 massage therapists. A lengthy suspension is possible.

“I can’t wait for us to get to play together, whichever week we see him,” Cleveland tight end David Njoku said. “Hopefully, it’s sooner than later. I’m excited. I can’t wait.

“But it’s not hard, we just have to take each day as it is. Whoever we have, we have to put our best foot forward and just keep working.”

Watson, a three-time Pro Bowl selection, signed a five-year, $230 million contract with the Browns after being acquired from Houston in exchange for three first-round draft picks in March. He was a member of the Texans during all of the alleged incidents.

Two separate Texas grand juries declined to indict Watson on any of the criminal complaints. He has settled 20 of the 24 civil lawsuits filed against him, and the attorney representing the women has said he hopes to take the other four to trial next spring.

There were no boos directed toward Watson at practice, but All-Pro defensive end Myles Garrett and standout running back Nick Chubb were welcomed onto the field with much louder, prolonged ovations.

“You can tell by the turnout that people want to go all-out for the Browns, but I think fans are being cautious,” said Hans Schneider, a 21-year season ticket holder and mayor of Wellington, Ohio. “Once a decision is made with Deshaun, there will be clarity.

“I’m very respectful of both sides, but regardless of the decision, some people will be happy and some will be unhappy about it.”

Watson did interact with several dozen young fans following the 80-minute practice, patiently signing autographs and taking photos on the sideline. He also gave away his cleats as prizes for playing games of rock, paper, scissors.

The lucky winners were 10-year-old Tanner Hall and 9-year-old Barrett Radel, who were wearing Chubb and Garrett jerseys. Only a handful of adults sported Watson’s No. 4, but the No. 6 of former Browns quarterback Baker Mayfield was well represented.

“I’m going to keep this in my room with me,” Radel said, beaming as he cradled Watson’s autographed shoe.

The fan interaction evoked warm memories for safety Grant Delpit, Cleveland’s second-round selection in 2020. The New Orleans native attended Saints practices as a pre-teen and was given an autographed football by his grandmother.

“I remember going to Saints training camp and that was the coolest thing ever,” Delpit said. “It’s cool to see it go full circle. I’m excited.”

Because of COVID-19 restrictions the past two summers, the Browns limited camp access to the public. Delpit is eager to make up for lost time.

NOTES: The players will have their first day off Sunday after starting camp with four lower-intensity practices. “

Garrett’s chiseled 6-foot-4, 272-pound physique remains a popular subject with his teammates. “I don’t know what else could change, it can’t get much bigger,” Delpit said. “He’s not getting no smaller. He’s the same Jurassic Myles.” …