The 25-year-old shot to fame in Tokyo after refusing to celebrate his runners-up finish as he had set his heart on top of the podium.

But he made up for the disappointment with an iconic professional debut spiked with needle, showmanship and a vicious one-punch finish of Greg O’Neill.

Benzo roared: “That’s how you do a debut!

“I am my own biggest critic and I was not happy with my first round but I didn’t like how he treated me at the weigh-in on Friday so there was some needle.

“There were no nerves, I maybe had too much fun in the first round, but I went back to my corner and got told and that was all she wrote.” 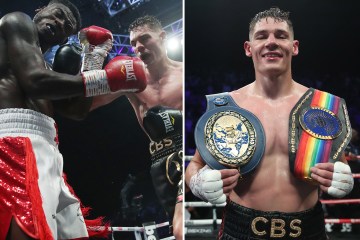 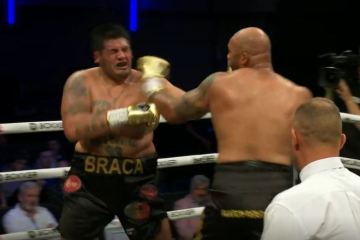 After strolling to the Bournemouth ring accompanied by his personal guitar player and pinging out his jab, he tangled with O’Neill and lifted his rival into the air like a ragdoll, thankfully without dumping him to the floor like a wrestler.

Later in the opener he threw bolo punches and made his opponent miss by miles, staring out into the crowd trying to find the shot o’Neill threw.

The Englishman was even warned for a couple of cheeky clips after the referee had ordered them to stop..

Then as soon as the second started he unleashed a ruthless right hand right out of his hero Thomas Hearns’ textbook and O’Neill was rightly counted out.

Whittaker’s showboating was perfect on the Dorset seaside and he gave O’Neill his respect after flattening him.

And the light-heavyweight has a list of all-English opponents he wants to slash through before he takes aim at a world title.

But next up is a trip to Jeddah where he will be on manager and mentor Anthony Joshua’s undercard for the Oleksandr Usyk fight on August 20.