AMERICAN Picker’s Mike Wolfe has revealed he’s in tears as he shares a rare photo of daughter Charlie after Frank Fritz’s stroke.

News of Frank’s stroke broke last week, after which Mike, 58, released a statement addressing the tragedy.

The History Channel star shared the photo of his daughter, Charlie, in an Instagram post on Friday.

The photo shows Charlie, embracing Mike’s mother and by relation, her grandmother, as the pair look out over a pond.

The TV personality captioned the post, “The two most important ladies in my life. Mama Wolfe and Baby Wolfe, seeing them together brings tears of joy to my eyes.”

Mike concluded, writing “Everything else fades away and my world feels complete.” 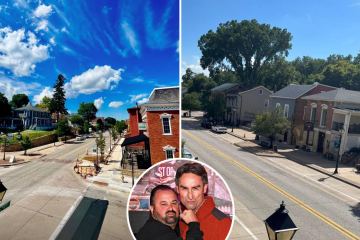 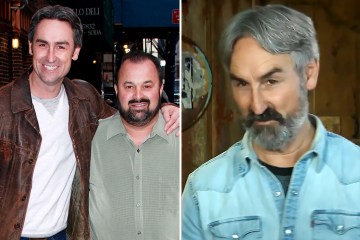 The “everything else” could quite possibly be the emotional turmoil Mike has suffered from his longtime friend and former co-host Frank, 56, still being hospitalized following his stroke.

Family appears to be the only refuge for Mike as the reality TV star recently shared another post from time spent with his daughter.

In an Instagram story, Mike cheered “That’s my girl!” as he uploaded snapshots of his little one.

In the series of snaps, the American Pickers star captured Charlie as she mixed paint onto her brush and painted the sides of the small bowl.

Mike captioned the post: “Watching someone that I helped create, create simple moments that bring tears to my eyes.

“This I will never forget.”

The Tennessee native shares his daughter Charlie with his ex-wife Jodi Faeth.

As previously mentioned, this all comes after news recently broke regarding Mike’s former co-host, Frank, having suffered a stroke.

Frank’s stroke took place about one year after he was fired from his role on the TV show.

The former American Pickers co-host has struggled with alcohol addiction for years and battled Crohn’s Disease, which is a chronic inflammatory bowel condition.

Upon hearing the news of Frank being hospitalized, Mike made a lengthy statement to address the sad news about his estranged friend.

He began: “I have been very private in the past year in regards to Frank’s life and the journey he’s been on. There have been lots of opinions in regards to mine and Frank’s friendship and the show but now is not the time to set the record straight. Now is the time to pray for my friend.

“Frank has suffered a stroke and is in the hospital. Please keep him in your hearts and thoughts.”

Mike concluded: “Frank, I pray more than anything that you make it through this okay. I love you, buddy.”

Frank last appeared on the show during a March 2020 episode, before he took time off to recover from a grueling back surgery that left him with 185 stitches and two rods in his spine.

Then, Mike was the one who publicly revealed that his friend had been booted from the show in July of 2021.

Although they were childhood buddies, Frank exclusively revealed to The Sun that Mike has not reached out to him since he was fired from the show.

“I haven’t talked to Mike in two years,” he said.

“He knew my back was messed up, but he didn’t call me up and ask how I was doing. That’s just how it is.”

Since Frank was let go, The Sun has revealed that the show’s ratings have plummeted to under one million viewers for the first time in years.

BACK TO THE FANS

Frank spoke to The Sun in July 2021, shortly after the news broke of his release from the series, claiming that he was eager to return to the cast.

He said at the time: “I would like to come back to the show. I was doing it for 11 years. I’m 100 percent recovered now and I’m ready to roll and go back on the show.”

But Frank claimed the network wouldn’t give him a straight answer about returning, as he continued: “They talk out of both sides of their mouth. It would be like me telling you I want to go back on the show and then tomorrow going, ‘I never said that, I never said anything about that.’

“The showrunner called me on my birthday on October 11 of last year and he said ‘I’ll call you back tomorrow,’ but I haven’t heard from those people at all. They don’t contact me.”

Frank insisted he “didn’t leave the show,” as he underwent back surgery and then the pandemic hit.

The collector added: “I don’t know if they can do it cheaper without having me on there or what the situation is.

“I want to go back on the show, but it depends on the network. It ain’t gonna affect me one bit, but I would like to be back for my fans.”