A TOWERING mound of rat-infested rubbish plaguing locals is so big it can be seen from space.

The fly-tipped waste mountain has grown so high it has been picked up by orbiting Google Earth satellites.

Fed-up residents in Coventry, West Mids, claim nothing is being done to rectify the illegal rubbish dump.

Pensioner Bob Chance, 75, told Sun Online: “We’ve been on to the council so many times but it’s just getting worse and worse.

“We may as well go and tell the kids down the park – it’ll be as much use as telling the council.

“Everything and anything you can think of gets dumped – mattresses, sofas, nappies, you name it. 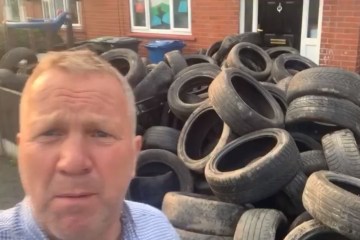 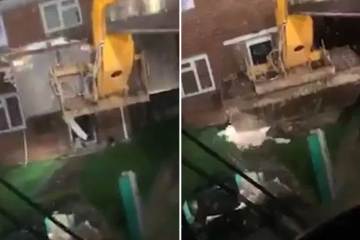 “It’s been terrible. Everyone is just so sick and tired of it.

“We’ve taken photos and sent them to the council but they’ve done nothing.

“What we need are cameras to catch these people – that or machine gun turrets to shoot the b*****ds.”

Bags of rubbish dumped on the corner of Clements Street and Villiers Street have attracted flies and rodents – with the detritus blowing in the wind into neighbours’ gardens.

Most read in UK News

Locals say that when Coventry City Council workers tackle the waste, it takes less than 24 hours to return to its huge size.

Rosemary Essex, 73, said: “I’ve lived here for 52 years and never in my life have I known it like this.

“The council come and clean it up and the next day it’s back to how it was.

“You wake up in the morning and there’s a mountain outside your house.

“I’ve given up tidying up the rubbish that’s blown into my garden because what’s the point?”

Neighbours are calling for action to be taken amid fears for their health and concerns the enormous dump is a fire risk.

“Sometimes it gets so big that it stretches onto the pavement and the road.

“The local councillor just won’t do anything about it. It piles high and it stinks, and it’s as brazen as you like.

“I’ve seen people in broad daylight come and just dump their rubbish. I was told the council are too scared to do anything.”

Fly-tipping has blighted Coventry since bin collectors went on strike in January in a long-running clash over pay.

Pat Gayle’s Final Image hair salon looks over the rubbish mound in the Stoke area of the city.

Pat, 48, said: “Yesterday was the biggest I’ve ever seen. There were tonnes of rubbish.

“I think they do it at night – I never noticed anyone fly-tipping during the day but when I come in to work it’s always there.

“It’s been happening for months. But now it’s summer, it really smells. It’s disgusting at times.

“I don’t know why the council doesn’t put fencing up to discourage them from doing it.”

Estate agent Joshua Oghre, 56, added: “It absolutely stinks. I feel sorry for the people who live nearby. They can’t even open their windows.

“At first, I presumed it must be allowed because it is so brazen.

“The people doing this should be prosecuted. Even if it was just one or two it would send the message out.

“The council should be rooting in the rubbish for letters – anything that might show where these people live.”

Coventry City Council said it had removed a bin on the corner to help stop the dumping.

A spokesman said: “We are aware of the problem of fly-tipping on Clements Street and Villiers Street and have attended and obtained evidence from local residents. We can confirm that lines of enquiry are currently being followed.

“There had used to be a litter bin on the site which had attracted waste.

“We therefore removed the litter bin in the hope that it would deter further tipping, but this hasn’t been the case.

“We had previously issued fixed penalty notices to several residents that had been caught, which have been paid, so it is disappointing to see that the problem is continuing.

“The council are looking at the possibility of installing CCTV in the area.”