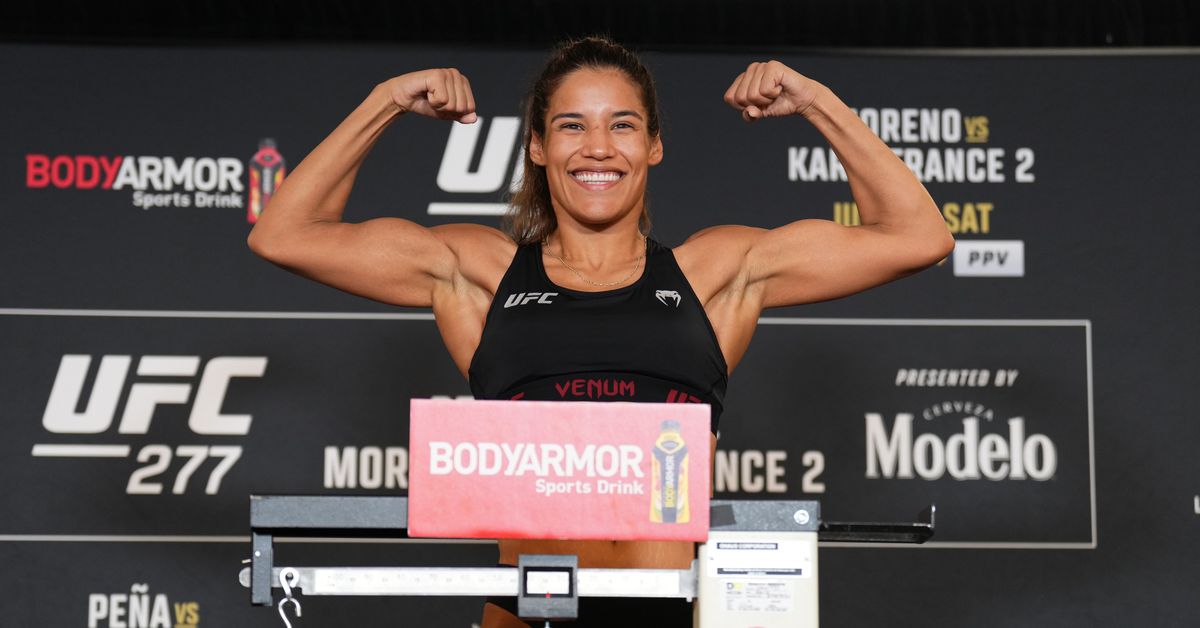 Julianna Peña made everyone else sweat at Friday’s official weigh-ins for UFC 277.

The reigning bantamweight champion arrived with almost no time left in the official weigh-in window, but once she stepped to the scale there was little drama as she actually came in at 134.5 pounds, 0.5 pounds under the championship limit, which does not allow for a one-pound allowance. Challenger Amanda Nunes successfully weighed in earlier at 135 pounds.

Saturday’s headlining bout at American Airlines Center in Dallas is a rematch from UFC 269 this past December. Peña — currently No. 1 at 135 pounds in MMA Fighting’s Global Rankings — defeated Nunes by second-round submission to capture the bantamweight title and snap Nunes’ 12-fight win streak that stretched back to 2015.

In the co-main event, former UFC champion Brandon Moreno and Kai Kara-France battle for a vacant interim flyweight title. Both successfully made championship weight at 124.5 pounds.

While Peña’s close call turned out to be a false alarm, two other fighters competing on Saturday’s card weren’t so lucky. Bantamweight Joselyne Edwards and welterweight Orion Cosce both officially came in 1.5 pounds over the limit. They forfeit 20 percent of their purse as penalty to their respective opponents Ji Yeon Kim and Blood Diamond. The bouts will proceed at a catchweight.

*Edwards missed weight on first attempt and declined to weigh in a second time. She forfeits 20 percent of her purse to Ji Yeon Kim as penalty and the bout will proceed at a catchweight

**Cosce missed weight and did not have time to make a second attempt. He forfeits 20 percent of his purse to Blood Diamond as penalty and the bout will proceed at a catchweight