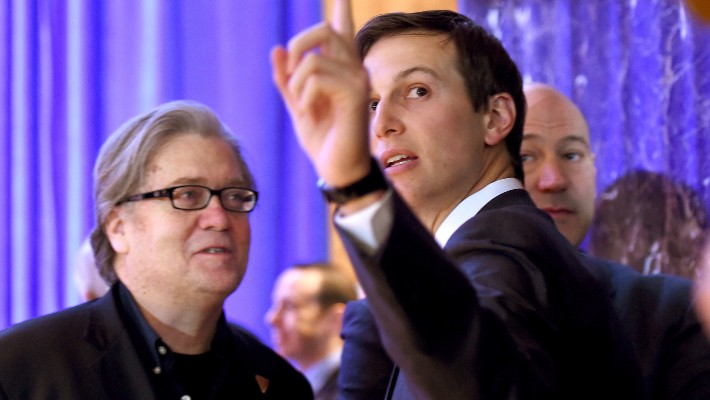 Thanks to Donald Trump‘s White House infamously leaking like a sieve, it was no secret that Steve Bannon and Jared Kushner absolutely hated each other. The two were locked in an all-out war to oust the other from Trump’s administration, and in the end, Kushner ended up winning as Bannon was eventually fired. Wasting no time capitalizing on his nepotistic jaunt through Washington, Kushner has written a new book, Breaking History: A White House Memoir, where he naturally gloats about his victory over Bannon.

Setting himself up as the plucky underdog, despite being Trump’s son-in-law, Kushner writes that he was “woefully unprepared” for dealing with Bannon, “a black belt in the dark arts of media manipulation.” According to Kushner, the whole thing started after senior economic adviser Gary Cohn asked him to do something about Bannon leaking to the press. Trump had already had several meltdowns over leak, so naturally, Bannon didn’t take the accusation well. Via CNN:

Kushner writes that Bannon responded: “‘Cohn’s the one leaking on me. … Jared, right now, you’re the one undermining the President’s agenda,’ he continued, his eyes intense and voice escalating into a yell. ‘And if you go against me, I will break you in half. Don’t f— with me.’”

After Bannon got fired in August 2017, Kushner reveals he gloated to a friend that it was one of his “greatest accomplishments.” However, Kushner is now in a similar position. According to reports, he and wife Ivanka have been replaced in Trump’s inner circle by Mike Lindell. As in Mike Lindell, the MyPillow Guy who recently blurted out on camera that he spent the past 30 years on crack. That’s the new Jared now.