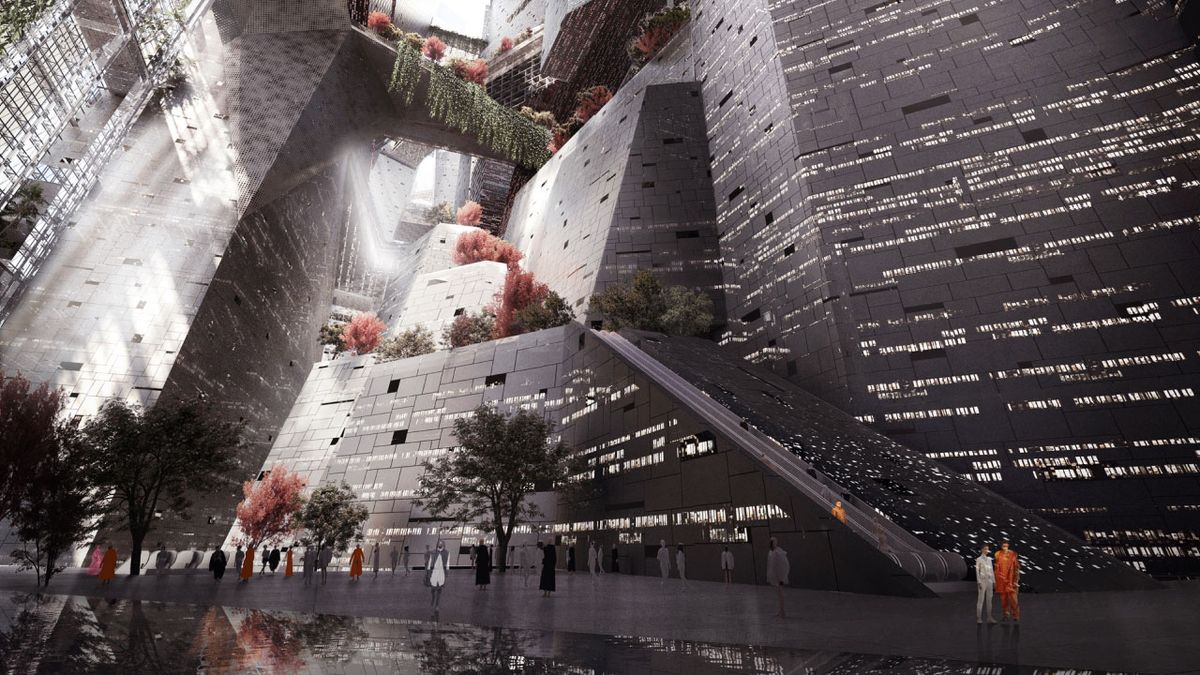 Saudi Arabia’s longstanding project to build Neom (opens in new tab), a science fiction megacity on the Red Sea, has seen a renewed marketing push, with a revamped official website and a spurt of activity on the project’s official Twitter account. The Neom page has been posting concept videos and images of “The Line,” a proposed “vertical city” 200 meters wide and 170 kilometers (105 miles) long that would form a component part of the wider initiative.

First, the positives: This shit looks like Destiny. This thing looks like the dang Citadel from Mass Effect, Hollywood-caliber concept art of white terraces and neon signs with lush greenery throughout. It’s like the rich part of Shanghai in Deus Ex: Human Revolution. It’s interesting to see something like this imagined on the planet we inhabit.

Now, the hard part: Does it seem intuitively feasible to build a wafer-thin megacity a hundred miles long in the middle of the desert, and also somehow have it be a nice place to live that accommodates nine million people, with a transit system capable of sending them end-to-end in 20 minutes? I’m particularly curious about the promised mirror sheen on the city’s exterior walls. One small-but-significant detail is the fact that ordinary glass skyscrapers already pose a large mortality risk to birds, but my mind boggles at the logistics of keeping this thing cleaned and maintained across all 105 miles.

The human race is no stranger to building impossible cities in the desert, but this concept may not have the best long-term returns. Las Vegas, America’s adult playground, has embraced aggressive and forward-looking water conservation policies, but its primary source of drinking water, Lake Mead, has so drastically declined in capacity that the shrinking water level has revealed the victims of mafia hits (opens in new tab) dumped in the city’s reservoir during the Cosa Nostra’s heyday. Fallout: New Vegas may have presented a more rosy picture of the city in the year 2281 than we’re actually looking at in real life. Man-made climate change seems poised to render countless once-livable regions unfit for human habitation, so why build an expensive, experimental megacity in an area that’s already so unforgiving, displacing the 20,000 or so Bedouin people (opens in new tab) who get by in the desert with a far less extravagant lifestyle?

Neom promises a “zero-car environment” with a “100% sustainable transport system,” but will this offset the massive carbon footprint of constructing a future metropolis in the middle of the desert, let alone Saudi Arabia’s contributions to climate change as the world’s foremost exporter of oil?

Humanity demands inventive, creative solutions to fight climate change, but the Syfy Channel original movie quality of Neom reminds me more of the empty tech promises of the 2010s: Self-driving cars are somehow always five years away, robot drones will replace essential services like delivery, and now a monarchy built on oil wealth is going to build the city of the future in the middle of the desert.

Perhaps I’m destined to eat crow as a short-sighted hater of the House of Saud once it triumphantly builds the Citadel from Mass Effect out there, but feeling such embarrassment would be far from the worst fate suffered by a critic of the Saudi Arabian government.

The Neom concept’s compelling sci-fi vistas are reminiscent of my favorite works of fiction, and it’s a little enlivening to see anybody make bold plans for the future in what is otherwise a grim time, but it’s not likely to be built. It’s part of a charm campaign meant to rebrand a regressive state that also happens to be a fantastic customer of US arms manufacturers (opens in new tab). Saudi Arabia’s reputation has taken hits in recent years, particularly with the killing of Washington Post journalist Jamal Khashoggi (opens in new tab) by Saudi intelligence agents, and the country’s pursuit of a long war in Yemen, which the BBC describes as causing “one of the worst humanitarian crises in the world. (opens in new tab)“

So maybe take that neato art of lush, Presidium terraces and a wall of glass punctuating the endless sand with a grain of salt, cool as it might be.