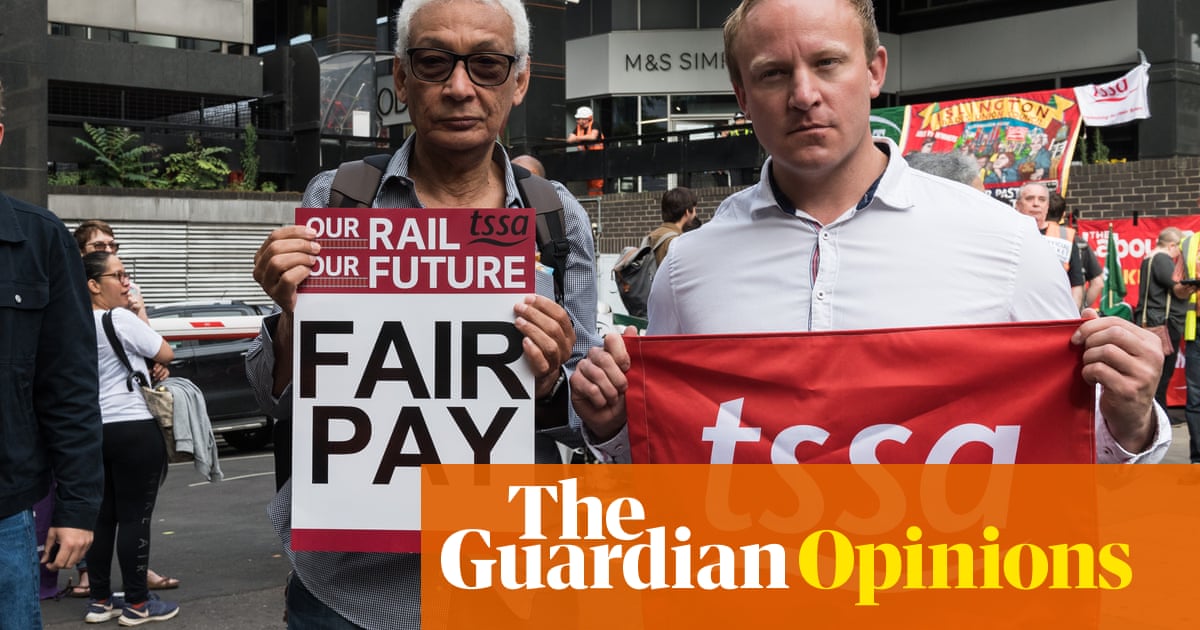 The rail workers I stood with on the picket line told me harrowing accounts of how they and many of their colleagues are routinely forced to collect donation parcels from food banks at the end of shifts. I was proud to stand with them – it would have been an abject dereliction of duty for me as a Labour MP to refuse to join workers in their struggle for a fair wage.

As a Labour party shadow transport minister, a position I held until just a few days ago, I was duty-bound to speak out against horrific Tory attacks on working people.

While I’m saddened to be removed from the Labour frontbench, and I’m no longer part of what I firmly believe is a “government in waiting”, it’s nothing compared with the hardship endured by our rail workers.

Ticket collectors, signal workers, train cleaners and catering staff are so badly paid, often on annual salaries in the low £20,000s, that some are forced to rely on the generosity and compassion of charities and faith groups to survive.

These are the same workers who kept Britain’s trains running at the height of the pandemic. Remember that the rail network was never shut, even before vaccines, when Covid was claiming untold numbers of lives and causing devastating levels of hospitalisation.

Rail employees put their own safety and wellbeing in jeopardy to ensure that other key workers were able to get to work, and that medicines and other provisions could be transported. Belly Mujinga, a member of the Transport Salaried Staffs’ Association (TSSA), even lost her life to Covid after working on the rail frontline.

Britain, and the UK government in particular, owes a debt to these Covid heroes.

Opposing this means doing more than just speaking out in the House of Commons, which I did before recess last week, or in the TV studios, or in any other formal setting. It means being on the picket line, standing shoulder to shoulder with rail workers.

These Covid heroes had the right to expect Labour, the party of working people, to stand with them and speak out against the war that the Tories have declared on them. That’s why I stood on the picket line at Euston, with my friends and allies in the RMT and TSSA transport unions, and why I gave media interviews in support of these workers.

That was my duty, as a shadow transport minister. It was an extension of my role as the Labour MP for Ilford South, and the job I did for eight years before entering parliament as an official for the Transport and Salaried Staffs’ Association.

It’s a crime that in the 21st century so many of Britain’s rail workers are living in conditions of in-work poverty, where even after a full day’s hard and stressful work they are often unable to afford the basics of food, rent and fuel, among other essentials.

However, victory could soon be within the grasp of the rail workers, and Labour can and should play a critical role in inflicting a defeat on the Tories over this. The overwhelming majority of Labour members have been utterly resolute in their support of the rail workers. Only this week on the picket line, I spoke to Labour members from across London, who turned out to show their solidarity with the RMT and TSSA.

Banners from local Labour parties were photographed and posted online, from coast to coast, during the last day of strike action. That support and solidarity can assert itself in the Labour party in the weeks and months ahead. Constituency Labour parties, and other affiliates, must pass emergency motions in support of the striking rail workers, to go to the Labour conference in Liverpool in late September.

Labour members taking part in the selections for parliamentary candidates must challenge would-be MPs to commit to supporting the rail strikers, and other industrial disputes in the seats that they seek to represent. Labour needs to show it is on the side of workers across Britain, that we have a plan for a pay rise, and to rebalance the economy in favour of the vast majority. At every opportunity, Labour party members can and will raise the cause of the striking rail workers.

During my picket media interviews this week, I stated that this dispute would not be happening under a Labour government led by Keir Starmer. That remains my view. I will continue to strive every day for a Labour government, and work my hardest to achieve it.

But the rail workers need Labour in this dispute now, and MPs at Westminster, who will not shirk from standing with them on picket lines and fighting back against every Tory attack on these Covid heroes.

It’s a dereliction of duty not to do so.