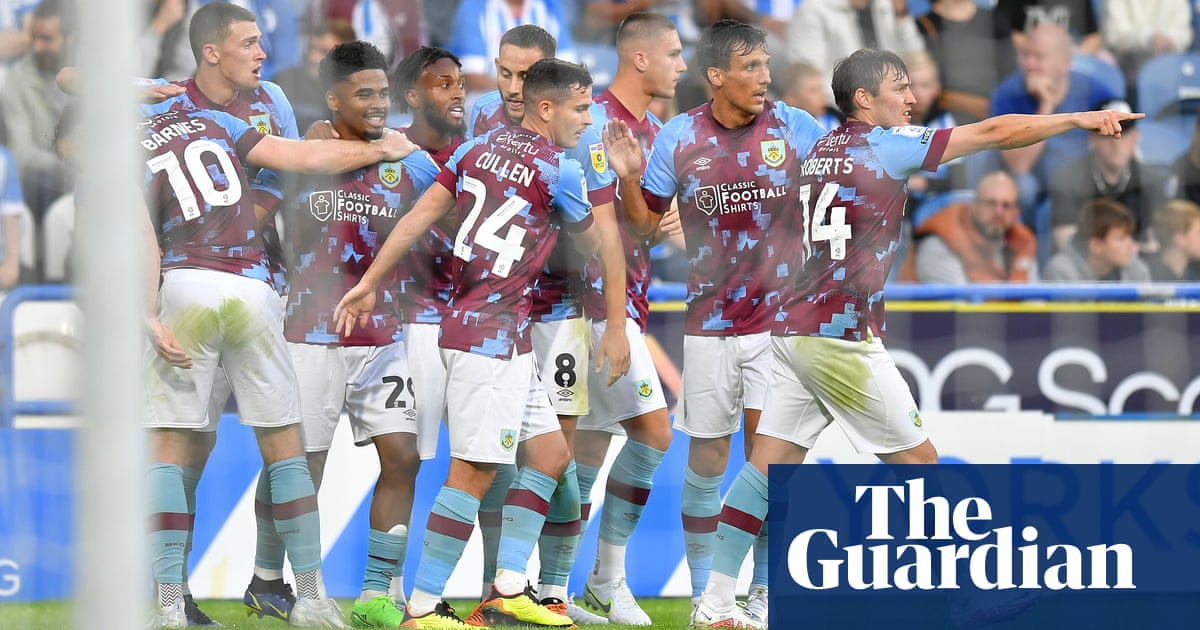 Vincent Kompany’s Burnley did not have it all their own way in their victory over Huddersfield but Ian Maatsen’s winner summed up the new-found dynamism to offer a glimpse of what is to come as the defender started and finished an eye-catching move to start the club’s new era with three points.

The Clarets completed more than 300 passes in the first half, they only achieved such a feat in 90 minutes twice in the entirety of last season to show the early impact of their new manager. No wonder Kompany said he was inspired by Pep Guardiola pre-match. The Manchester City boss will have enjoyed the winner, too, even if it did come from a Chelsea player who marauded into the area from left-back before picking out the bottom corner.

Burnley went with the more revolutionary approach to their new era with six debutants in the starting lineup and potentially another half dozen on the bench. Hardly surprising for a club that lost 10 first-team players over the summer and have already brought in nine. Huddersfield, on the other hand, began with no new signings on the pitch as Danny Schofield hoped Championship experience would be the wiser choice on his own managerial debut.

The heat of the battle seemed to get to Kompany early on; the Belgian felt the need to remove his suit jacket with less than four minutes on the clock. He watched on as goalkeeper Aro Muric was causing much consternation for Kompany because his passes were repeatedly finding blue and white stripes to bring constant pressure, while Burnley learned on the job about their new roles and system, but they quickly settled.

Ashley Barnes, the only fit striker available to Burnley, showed his experience to get the wrong side of the Huddersfield defence without testing Lee Nicholls. Burnley fans found their early season cheer during a sustained period of passing, something not witnessed in the Sean Dyche era, with every sideways pass that found its target given a quasi-sarcastic “Olé” by the packed away end as the Clarets began to dominate.

The old and the new combined thanks to more clever work from Barnes to dummy a pass to create space in the box, it would eventually come back to his feet from Josh Brownhill, allowing him to control and inadvertently lay the ball into the path of debutant Maatsen, who had started the move on the halfway, to pounce and curl first time in the bottom corner.

Kompany’s vision of an attacking side was starting to be seen in glimpses. Soon after the opener, a second should have arrived when a one-two between Connor Roberts and Josh Cullen saw the full-back latch on to a dink over the top but his close-range jab was stopped by Nicholls. Cullen was the man instigating everything positive in the Burnley midfield thanks to his neat touches, passing and ability to read the game, showing why Kompany was so eager to bring him with him from Anderlecht.

Advice was constantly sought on the sidelines by Kompany from predecessor Mike Jackson who led the time in the final weeks of their Premier League stay. He may have wished to call upon his assistant Craig Bellamy for a stint up front because Barnes’ limited pace and movement as a lone striker in a team lacking width were being highlighted.

Sensing a shift in dynamic, Schofield made a double substitution by bringing on Jack Rudoni and Tino Anjorin just before the hour mark. The latter, a loanee from Chelsea, made an instant impact when fouled on the edge of the area by Cullen who received a caution for his troubles, while inciting the ire of the crowd.

Huddersfield were finding their feet after a frustrating start summed up by Sorba Thomas kicking out at Charlie Taylor following a foul by the Burnley defender. The referee missed the petulant act luckily for Thomas but it at least showed some much-needed passion from the home team. Anjorin showed further immaturity by pinging the ball against Taylor soon after while the centre-back was on the ground after earning a foul of their own. It seemed the latter stages would be decided by which side could keep their cool in front of a fired up crowd.

Whether Burnley can put in such a sustained effort over a 46-game season is yet to be seen. The players waned in the final stages on a humid night against an unrelenting opposition but managed to hold on. Others will see Burnley as a scalp this season after they came into the opening fixture as an unknown quantity. The foundations have been installed for Burnley to build on, all they need to do is reach Kompany’s standards for longer than an hour.