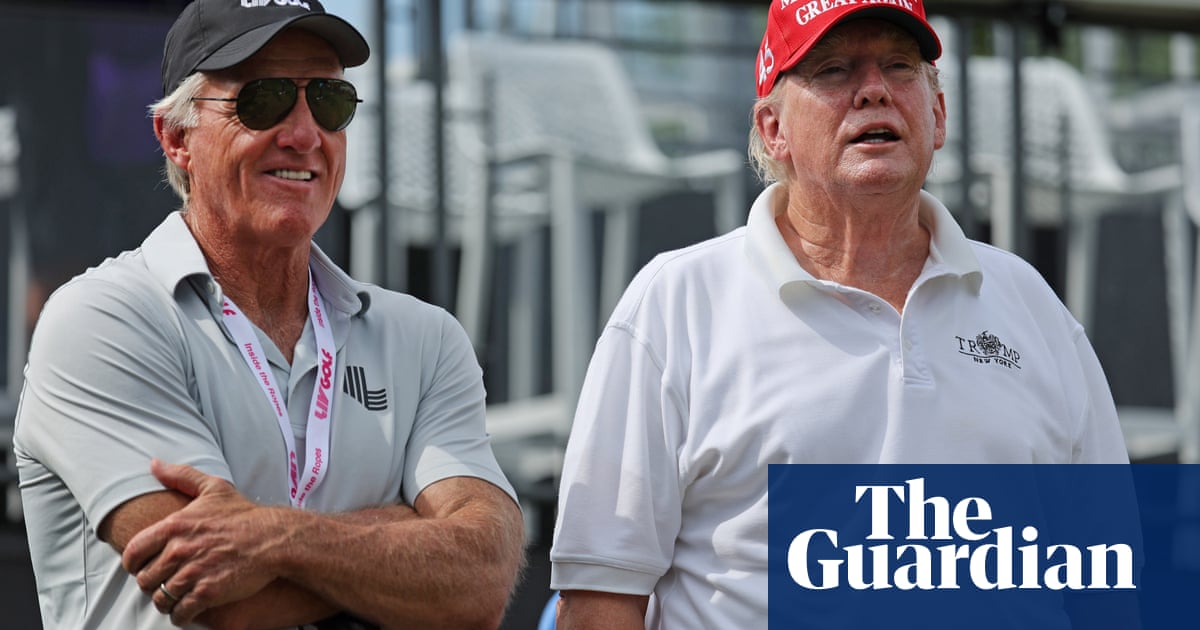 The controversy that has come to define the Saudi-financed breakaway tour at the heart of professional golf’s civil war has redoubled this week as the LIV Golf Invitational Series stages its third event at the Old Course at Trump National Golf Club in Bedminster, the bucolic New Jersey township 45 miles west of New York City.

The upstart circuit bankrolled by Saudi Arabia’s sovereign wealth fund has enticed some of the sport’s biggest names, including Phil Mickelson, Dustin Johnson, Brooks Koepka and Bryson DeChambeau, with exorbitant $25m purses, nine-figure signing-on fees and an assemblage of perks that would be considered too garish for a reality TV show. It has also drawn fierce backlash from critics who accuse the Saudi government of using sports to launder the kingdom’s dismal human rights record, alleged ties to the September 11 attacks, severe repression of women’s and LGBTQ+ rights and the 2018 murder of the dissident Saudi journalist Jamal Khashoggi.

But for all the focus on the Saudi regime, the opportunity for Trump to return his golf business to the public eye and attain a long-sought role as a big-time sports powerbroker is just as relevant a plotline.

The former US president has always placed a premium on sport as an inextricable stripe of American life and bought in accordingly. He owned a team in the upstart United States Football League in the early 1980s, ponied up eight-figure fees to host prizefights at his Atlantic City casino before it went bankrupt, financed an American alternative to the Tour de France – the predictably named Tour de Trump – and made a splashy but failed bid for the NFL’s Buffalo Bills in the 2010s.

As the walls closed in during the final days of his presidency, his Twitter account neutered and reputation stained for his role in inciting the US Capitol attack in 2021, Trump’s critics saw a certain poetic justice in the rejection he experienced from his favourite sport. Only days after the 6 January insurrection, the PGA of America announced it was stripping Bedminster of the 2022 US PGA Championship, the supposed crowning achievement of his two decades as a golf course owner. In Trumpland, it was a fate worse than impeachment itself.

But the former US president is nothing if not durable. And there he was on Wednesday night at the LIV Golf welcome gala at Manhattan’s Gotham Hall, taking in a performance by Nelly and kibitzing with Caitlyn Jenner and a cadre of the PGA Tour defectors whose adulation he craves. On Thursday, he was due to take part in the Pro-Am at Bedminster alongside DeChambeau and Johnson.

Trump has further leaned into sports-baron cosplay by advising golfers to side with LIV against the PGA Tour. “All of those golfers that remain ‘loyal’ to the very disloyal PGA, in all of its different forms, will pay a big price when the inevitable MERGER with LIV comes, and you get nothing but a big ‘thank you’ from PGA officials who are making Millions of Dollars a year,” Trump wrote on Truth Social.

There was a time this marriage of convenience would have been considered improbable. Trump accused Saudi Arabia of a role in the September 11 attacks throughout his 2016 presidential run and decried the country’s abhorrent LGBTQ+ rights record during his final debate with Hillary Clinton. But he quickly warmed up to the Saudi regime after taking office, making a trip to Riyadh and later delivering an extraordinary statement backing Crown Prince Mohammed bin Salman’s denial of responsibility for the Khashoggi murder in defiance of US intelligence officials.

It remains unclear how much the former president’s company will earn for hosting this week’s event and LIV Golf’s October season finale at Doral, another Trump club outside Miami, but the move has attracted plenty of criticism. The 54-hole, no-cut competition will begin on Friday afternoon amid protests by 9/11 families at the public library in Bedminster four miles down the road from the sprawling 500-acre grounds of Trump National. Terry Strada, the national chair of 9/11 Families United, called the venue the “worst place on the planet” for the event: “[Trump] is a New Yorker, he claims to have empathy for the families but clearly he does not. If he had a sensitive bone in his body he would understand the level of angst this causes.”

Whether the endeavour will deliver a return on the Saudi Public Investment Fund’s $2bn injection is anyone’s guess, though early indicators have left much to be desired. This week’s event, like the first two, has been relegated to YouTube, and there is no television deal in place. And the cost of a $75 grounds pass for Friday, Saturday or Sunday was down to a scant $3 on the secondary market as of Wednesday afternoon, denoting a paltry demand even among the Maga faithful itching for a glimpse of the former president in the flesh. The money is spinning. But in the absence of commercial sense, LIV Golf remains a splashy opening in search of an endgame.