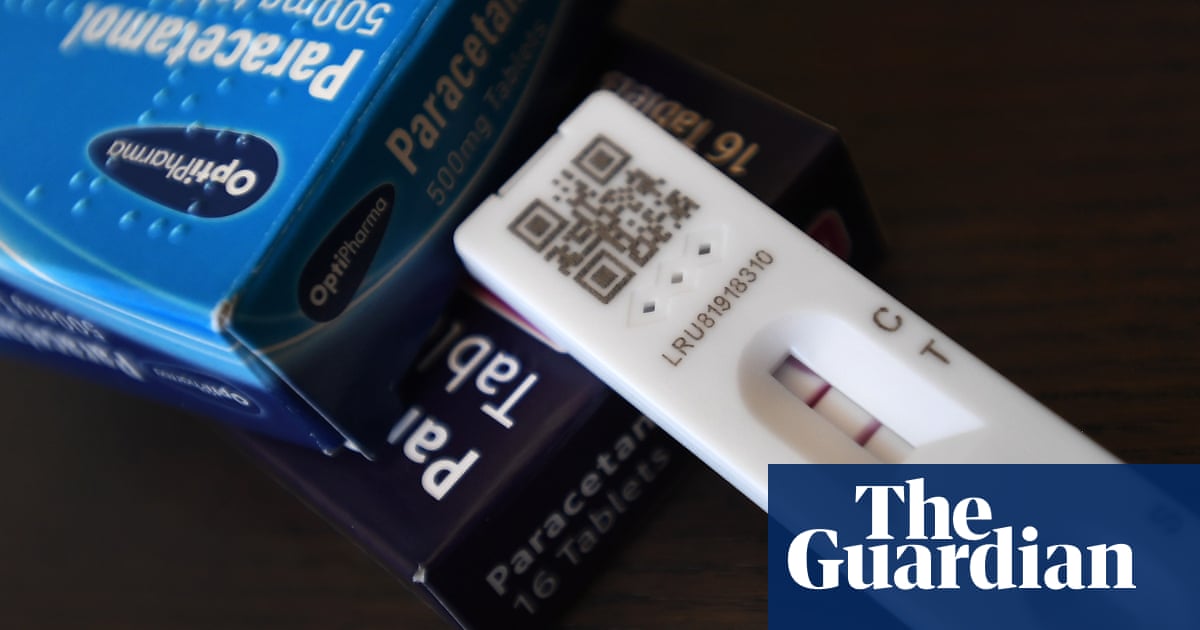 The UK’s latest wave of Covid appears to have passed its peak with infections falling by more than half a million in a week, according to the Office for National Statistics.

The ONS estimates, based on swabs collected from randomly selected households, suggest the number of people infected in the UK fell by 586,400 in the week ending 20 July. Covid rates remain close to an all-time high, however, with an estimated 3,173,800 people, about 1 in 19, testing positive across the country in the most recent week surveyed.

There’s been a similar decline in Covid infections in hospitals with the UK Health Security Agency reporting on Thursday that Covid case rates edged downwards across all age groups, regions and ethnic groups in the third week of July. Case rates are highest in the over-80s, the most vulnerable to severe Covid.

According to the ONS data, the number of infections in England fell in the week ending 20 July, with 1 in 20 infected, compared with 1 in 17 the week before. In Scotland and Wales the estimated infection rates fell to 1 in 19, but in Northern Ireland the trend was uncertain, with 1 in 16 estimated to test positive, up from 1 in 20 the week before.

“Our most recent data suggest that we may now be over the peak of the latest wave of infections across the UK, although rates still remain among the highest seen during the course of the pandemic,” said Sarah Crofts, head of analytical outputs for the ONS Covid-19 Infection Survey.

“We have seen welcome decreases among most parts of the UK and in all age groups. With summer holidays starting and more people travelling, we will continue to closely monitor the data,” she added.

The most recent wave of Covid is the third to hit the UK since December. The first wave, fuelled by the original Omicron variant BA.1, was swiftly followed by a second wave in March driven by the Omicron subvariant BA.2. At the peak of the second wave, a record 4.9 million people were infected in a single week, about 1 in 13 of the population.

The most recent wave was fuelled by two more Omicron subvariants, namely BA.4 and BA.5, which started to gain ground in June, though BA.5 now accounts for more than three-quarters of UK cases. It is unclear whether BA.5 spreads faster because of higher transmissibility, its ability to evade immunity from vaccines and previous infections, or a mix of both.

Covid rates fell across all regions of England except the north-east and in all age groups, the ONS found.

Jonathan Ball, a professor of molecular virology at the University of Nottingham, said government testing data pointed towards a dip in Covid cases and the latest ONS results, which lag behind the real-time situation, confirm this.

“This is great news, but of course we will see future outbreaks as our immunity contracts and as new variants arise,” he said. “It’s always difficult to predict when the next wave will occur, but the chances will increase as we approach the autumn and winter periods – a time that many respiratory infections do the rounds.”

Public health officials are concerned that the autumn and winter could see a resurgence of influenza and another wave of Covid. On advice from the Joint Committee on Vaccination and Immunisation, all those aged 50 and over, frontline health and social care workers, residents of care homes for older people, and others who are clinically vulnerable will be offered flu and Covid shots to reduce cases of severe disease.

“Given the inevitability of a new wave of infections, it is incredibly important that the most vulnerable in our community get boosted, both for Covid-19 and for flu,” Ball added.

Dr Stephen Griffin, a virologist at the University of Leeds, said: “It’s encouraging that we appear to have reached the peak of infections, but prevalence remains incredibly high with something like 1 in 20 people being infected last week.

“Hospitalisations have also seemingly peaked, but it is likely that the increase in deaths we are seeing will continue to increase. Moreover, this high prevalence will sadly translate into more long Covid cases.

“Looking forward, it’s pretty clear that we can expect further waves over the course of 2022, which may also coincide with a predicted influenza surge in the autumn. This makes it essential that we have a comprehensive plan for vaccines and look to minimise the impact of infections going forward.”