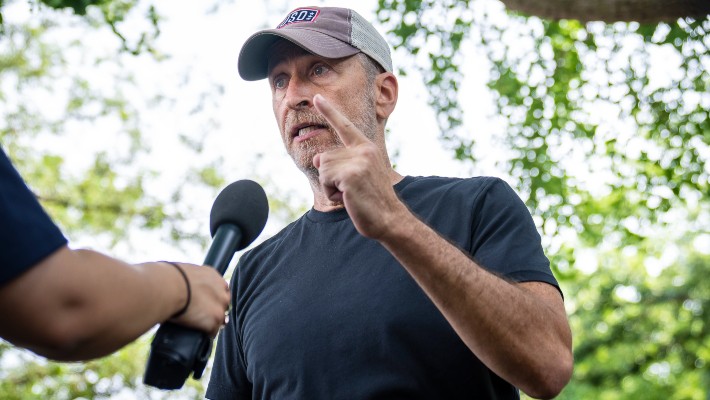 Stewart, who’s been fighting to secure medical benefits for vets since late last year, made headlines this week when he called out the GOP for blocking the bill which was intended to help military servicemen and women suffering from various ailments as a result of the toxic pits. First, Stewart slammed Republican Congressmembers who voted down the bill, saying “If this is ‘America First’ then America is f*cked.”

“If this is America First, then America is fucked.”

Take 10 minutes to watch Jon Stewart tear into Republicans for blocking a Senate bill providing benefits to veterans, including for those exposed to burn pits. pic.twitter.com/UMzCV5uKnU

Jon Stewart calls out Senate Republicans for supporting the “War Machine” but voting against veteran benefits:

Now, Stewart is popping up on Fox News, hoping to plead with the network’s conservative fanbase while getting in a few digs at some of the more ridiculous reporting the news platform has done in the past. You can watch Stewart’s full tirade below:

Jon Stewart on Fox News: “I want to dispel some of the misinformation that has been put out about this bill. No spending that is not related to veterans has been added to this bill … Hunter Biden didn’t sneak in and add in unrelated spending in the middle of the night.” pic.twitter.com/y4x60VBbvW

First, Stewart appealed to Fox News fans by trying to debunk some of the misinformation surrounding the bill before directing them to Congress.gov, where they could read it for themselves.

Then, for good measure, Stewart snuck in a Hunter Biden joke, using one of Fox News’ favorite punching bags to mock the news channel’s tendency to cast a shade of conspiracy over every little thing Democrats try to get done in the House and the Senate — even medical help for vets forced to breathe in jet fuel, incinerated ammunitions, and burned human feces.

“Hunter Biden didn’t sneak in and add unrelated spending in the middle of the night,” he continued. “It is despicable to continue to use America’s men and women who are fighting for this country as political pawns for anger you have about separate issues. There is no pork in it. It is a kosher bill. I’d say halal, but I know how that might play on this network.”