Ferrari is returning to the era of six-cylinder racers with the new 296 GT3.

Ferrari says the engine shares a number of similarities with the road-going model, but is placed farther forward and lower down. This helps to lower the car’s center of gravity while also increasing torsional rigidity, which is about 10% higher than in the 488 GT3.

Also Read: Ferrari 296 GTB Brings Back The V6, But With A 819 HP Turbocharged Hybrid Twist

Those aren’t the only changes as engineers worked to “fine-tune all the engine’s internal fluid dynamics and the specific components adopted for the track version of the power unit.” Ferrari also worked to reduce fuel consumption and allow for “more flexible race strategies and reduced intervention times.” In regards to the latter, the alternator is attached to the gearbox to improve the unit’s compactness and rigidity while also making it easier for technicians to access.

Speaking of the transmission, it’s “new and specially developed” for the 296 GT3. The six-speed sequential gearbox features a magnesium case as well as a single-disc clutch with electronic actuation that can be controlled from the steering wheel. The gearbox is also mounted transversely for better aerodynamics and weight distribution.

Sticking with the performance theme, the 296 GT3 features an aluminum architecture and a suspension with front and rear double wishbones, tubular steel arms, and aluminum uprights. The model also has five-way adjustable dampers to provide the “widest possible range of settings.” 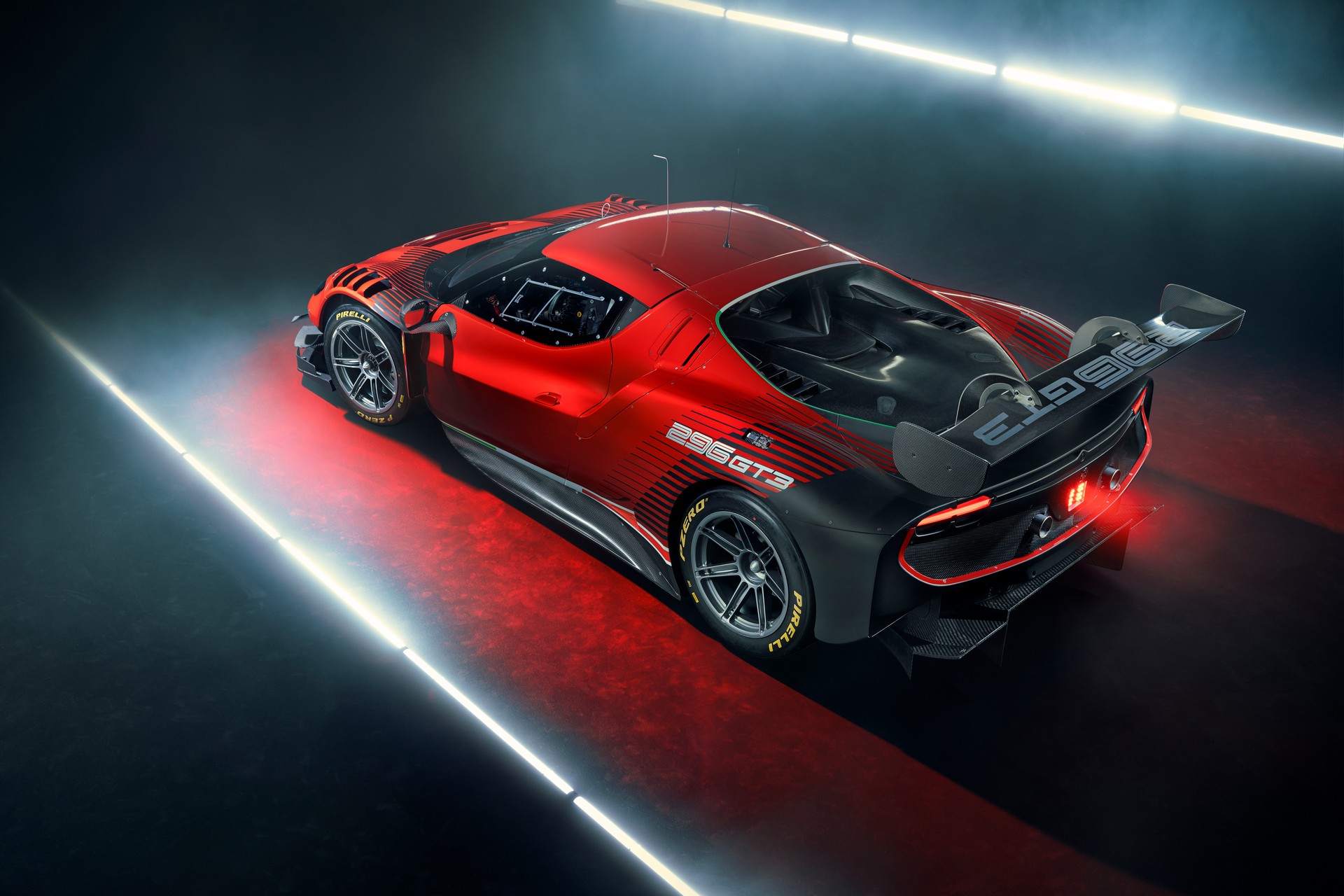 The braking system has been “revised and upgraded” as it features new discs and calipers. The front discs measure 15.7 inches (400 mm) and are grabbed by six piston calipers, while the 13.1 inch (332 mm) rear discs are backed up by four piston units. They’re covered by new 18-inch Rotiform wheels, which were homologated specifically for the 296 GT3.

Ferrari didn’t say much about the car’s exterior design, but noted the model “lives in symbiosis with the air around it, exploiting it to maximize grip and handling.” While that sounds like hyperbole, the 296 GT3 generates 20% more downforce than its predecessor.

As part of this effort, the car has been equipped with a carbon fiber front splitter, dive planes, and a prominent rear wing. They’re joined by extractors, a massive diffuser, and a carbon fiber engine cover. 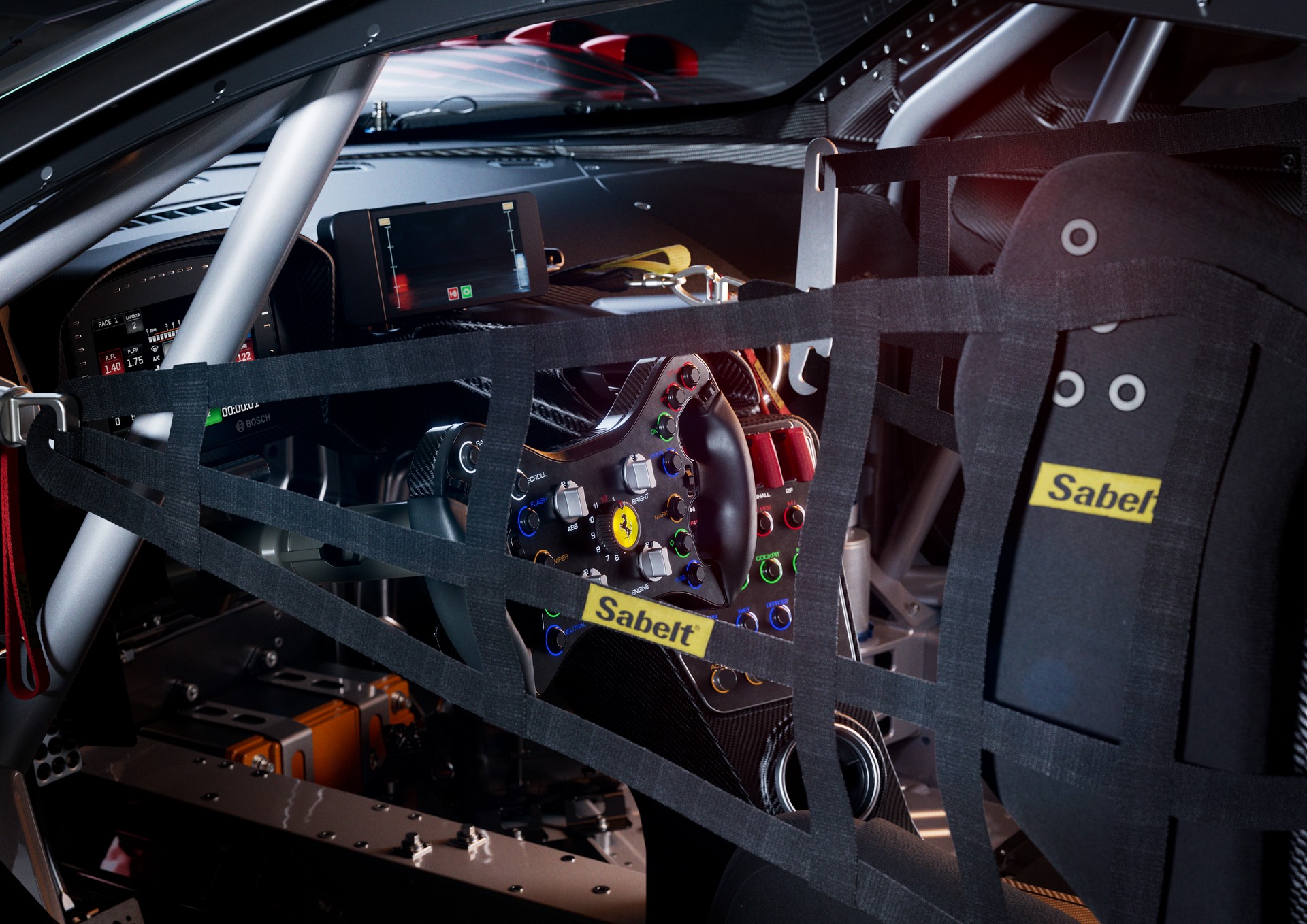 Moving into the cabin, it has been “completely redesigned” with input from factory drivers and customers. Ferrari moved many of the controls to the F1-inspired steering wheel, while also placing the driver’s seat in a location to ensure “optimal visibility, both day and night.”

The car also promises to be more comfortable than the 488 GT3, thanks to more adjustability to suit drivers of different sizes and statures. Ferrari went on to say the air conditioning system and airflow inside the cabin were “designed to provide adequate ventilation in all conditions, helping the driver to concentrate during every stage of a race.”

Since time in the pits is time off the track, engineers worked to speed up track operations by making parts more accessible and easy to adjust or swap out. In particular, “the front and rear portions [of the car] can be switched in seconds due to a series of devices and solutions that ensure a quick return to the track after any damage affecting aerodynamics or performance.” The company also noted “checks on the engine or major accessory systems were also significantly improved to cut intervention time on the car.”

The 296 GT3 is designed to appeal to both professional and gentlemen racers, and the model is set to make its big debut at the 24 Hours of Daytona in 2023.