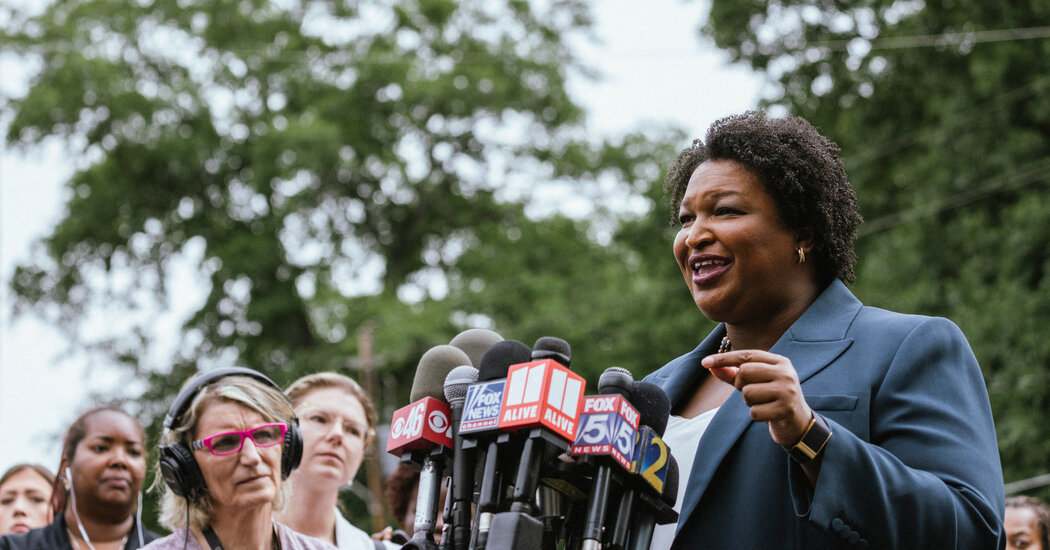 Today’s newsletter is a guest dispatch from Georgia, where my colleague Maya King covers politics across the South.

ATLANTA — Long before Georgia became the center of the American political universe, Stacey Abrams and leagues of Democratic organizers across the Peach State were testing out a new strategy to help their party win more top-ticket elections.

National Democrats largely dismissed their calculations, which called for exhausting voter turnout in the reliably blue Metro Atlanta region while investing more time and money in turning out rural, young and infrequent voters of color outside the capital city instead of the moderate and independent white voters in its suburbs.

There were strong civil rights interests at stake, given the history of discrimination against Black voters in Georgia and across the South.

But there were hardball politics at play, too, in Abrams’s push to register millions of new voters. She and her allies hoped they would become the backbone of a coalition that could turn Georgia blue for the first time since Bill Clinton won the state in 1992.

In 2018, Abrams, Georgia’s current Democratic nominee for governor, came extraordinarily close to winning her first campaign for the office. In 2020, her organizing helped Joe Biden narrowly win the state before boosting the fortunes of two Democrats who won both of the state’s Senate seats two months later.

The strategy is now widely accepted on the left — although it is expensive. But Abrams, her fellow Democratic candidates and several voter-focused organizations in Georgia are counting on it again this year to prove that their wins in 2020 were not a fluke made possible by former President Donald Trump’s unpopularity, but rather the continuation of a trend.

It’s why Way to Win, a collective of progressive Democratic donors and political strategists, is pouring $8.5 million into Georgia’s voter mobilization efforts ahead of November, according to plans first shared with The New York Times.

The group has already shelled out nearly $4 million to more than a dozen organizations in Georgia, including the Working Families Party and the New Georgia Project, which Ms. Abrams founded in 2014 and whose board Senator Raphael Warnock, a Democrat who is running for election to a full term, chaired from 2017 to 2020. The group’s goal is to provide the financial backing for Democrats to continue turning out the same broad swath of voters that they did in previous cycles, and blunt the effect of national trends working against them.

They also feel like they have something to prove to skeptics in Washington yet again.

“If you talk to these voters — every voter that has been ignored by traditional pundits and traditional institutional leaders — if you build a big tent, they will come,” said Tory Gavito, co-founder, president and chief executive of Way to Win. “I can’t tell you how many rooms I still go to where traditional operatives will say, ‘Is Georgia really a battleground?’ And it’s like, are you kidding? How many cycles do we have to go through where Georgia leaders really show the power of a multiracial coalition?”

To win the big statewide races, Georgia Democrats are counting on high turnout from the same coalition that brought them success in 2018 and 2020: a mix of loyal, rain-or-shine voters in addition to a critical mass of moderate, independent and infrequent voters.

But the outside forces getting them to the polls, or not, look very different than they did in the two previous election cycles. Where anti-Trump sentiment, a nationwide movement against systemic racism and coronavirus-related provisions that expanded access to the ballot fueled record turnout in 2020, voters this year are keeping rising prices and concerns about an economic recession front of mind, dampening their enthusiasm. They are also contending with a new, more restrictive voting law passed by the Republicans who control the state legislature and governor’s mansion.

Key Themes From the 2022 Midterm Elections So Far

The state of the midterms. We are now over halfway through this year’s midterm primary season, and some key ideas and questions have begun to emerge. Here’s a look at what we’ve learned so far:

Way to Win’s investment reflects a growing understanding among Democratic donors that early money matters even more in a tough midterm cycle.

An Atlanta Journal-Constitution poll out Wednesday found that just over 60 percent of likely Democratic voters said they believed the country was on the wrong track. That same poll showed Abrams trailing her Republican opponent, Gov. Brian Kemp, by five percentage points. Warnock’s Senate race against Herschel Walker, the first-time candidate and former University of Georgia football icon, is statistically tied. Political operatives and observers in both parties are expecting the campaigns to be among the most costly in the country this year.

And, as long as the economy remains the election’s top animating issue, Georgia Republicans are pinning the nation’s economic woes directly on Democratic leaders in Washington, warning that President Joe Biden’s policies will trickle further down south should Abrams win in November.

In a speech to supporters in McDonough, Ga. on Friday morning, Kemp railed against what he called “the Biden-Abrams agenda for Georgia.”

“Stacey Abrams campaigned for Joe Biden, publicly auditioned to be his vice president, celebrated his victory and took credit for his win,” Kemp said. He also condemned her for “listening to TV hosts on MSNBC, her big donors in New York and California and liberal elites who can stay in their basement for months on end.”

Democrats are also throwing their weight behind a number of races down the ballot, including for attorney general and secretary of state — two offices that have proven their importance in light of developments on abortion and election security.

A national debate over strategy

Many groups, particularly those led by people of color, have long decried money dumps from big, national donors that don’t come in until September or October — or, as Britney Whaley of the Working Families Party describes it, “the holiday, birthday and special occasion giving.”

By then, said Whaley, who spearheads the progressive group’s southeast regional organizing, it’s often too late for the groups aiming to mobilize hard-to-reach voters to make a big difference.

“If we hadn’t created the conditions on the ground that prepared us for Jan. 5, all of the money in the world would have been for naught,” she said, referring to the day Warnock and Senator Jon Ossoff were elected in 2021. Those two victories allowed Democrats to claim a majority in the Senate, unlocking the billions in spending that Republicans now criticize as wasteful and inflationary.

The Working Families Party’s national organizing arm has also taken notice of both the strategy and its implications for future elections. Maurice Mitchell, the party’s national director, said the Georgia model of balancing reliably blue voters in cities with new groups of voters in rural areas could be replicated in other battleground states, like Pennsylvania and Wisconsin.

And he warned against making too much of the debates among pundits and Democratic strategists that have continued since Warnock and Ossoff’s seemingly improbable wins: Should the Democratic Party exert more effort to win back the working-class white voters they’ve steadily lost since the 1980s, go after upscale college-educated suburbanites who are repulsed by Trump, or stick with Abrams’s approach of bringing new voters and communities into a multiracial, rural-urban alliance?

“The framework is there, and I think there’s been enough examples in recent history of it working,” Mitchell said. “I think we should fight for every vote, but the idea that we would de-emphasize or de-prioritize communities of color or progressives or young people in a sort of zero-sum to reach out to moderate or swing voters, I think that is a dangerous strategy.”

On Politics regularly features work by Times photographers. Here’s what Kenny Holston told us about capturing the image above:

As a photojournalist who has covered former President Donald Trump in some capacity since 2016, I know a chaotic scene is never too far behind him.

This was the case earlier this week when Trump returned to Washington, D.C., for the first time since he left office.

Officers from the Metropolitan Police Department lined the street in front of the Marriott Marquis hotel, where Trump spoke at a gathering of the America First Policy Institute. On one side of the police line stood anti-Trump protesters, and on the other, Trump supporters.

Officers broke up a few scuffles between the dueling demonstrations as hotel guests watched the disorder unfold from the lobby window, all while a large box truck projecting oscillating images of Trump and his 2020 election loss on its sides circled the block repeatedly.

In an effort to convey this scene in a single photo, I decided to use the reflection in the hotel window. I got very close to the glass with my camera and tilted the camera slightly, allowing me to partially see through the glass while also capturing everything reflected in it, as seen in the photo above.

Thanks for reading. We’ll see you Monday.

Is there anything you think we’re missing? Anything you want to see more of? We’d love to hear from you. Email us at onpolitics@nytimes.com.