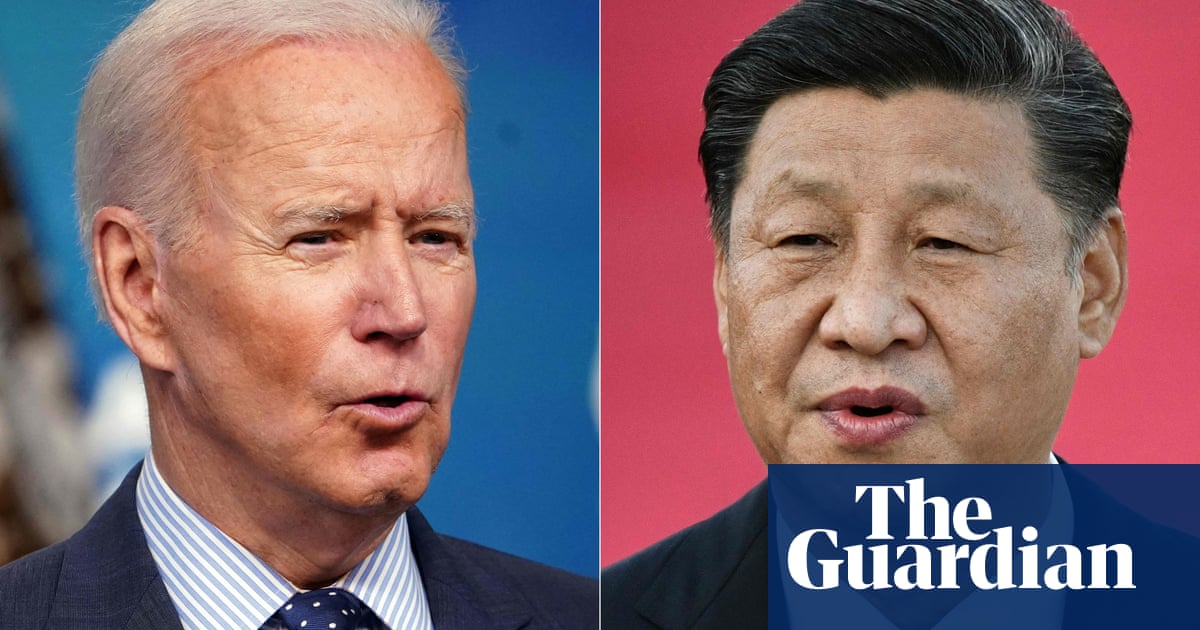 The Chinese president has warned Joe Biden against “playing with fire” over Taiwan in a highly anticipated phone call that lasted more than two hours on Thursday, as tensions remain high over the House speaker Nancy Pelosi’s potential trip to the island next month.

“Those who play with fire will be perished by it. It is hoped that the US will be clear-eyed about this,” Xi Jinping, according to a Chinese statement. He also urged the US to implement the three joint communiques that serve as the foundation for relations between the two countries “both in word and in deed”. Xi vowed “resolutely” to safeguard China’s national sovereignty and territorial integrity and said this is “the firm will of more than 1.4 billion Chinese people”.

This is not the first time Xi has used such language to dissuade Washington from publicly supporting Taipei. Last November, Xi also warned the US president in a virtual summit that China was prepared to take “decisive measures” if Taiwan makes any moves towards independence that cross Beijing’s red lines.

In response to Xi’s comment on Taiwan, Biden reiterated Washington’s policy and said it had not changed and that “the United States strongly opposes unilateral efforts to change the status quo or undermine peace and stability across the Taiwan strait”, according to the US statement, which was much shorter than the Chinese one.

Last week, it was reported that Pelosi was planning a trip to Taiwan, although it has still not been confirmed. Biden cautioned against the trip, and Beijing threatened Washington with serious consequences if it went ahead. A visit by the House speaker would be a dramatic, though not unprecedented, show of US support for the island.

Taiwan has complained of increased Chinese military manoeuvres over the past two years to try to force it to accept Beijing’s sovereignty.

On Thursday, Taiwan’s military said it fired flares to warn away a drone that “glanced by” a strategically located and heavily fortified island close to the Chinese coast that was possibly investigating its defences. A senior Taiwanese official said it was a Chinese drone, probably one of China’s new CSC-005 drones. China has not commented.

In 1997, China complained about the then speaker Newt Gingrich’s visit to Taiwan, but eventually swallowed its irritation. Analysts worry that as Xi prepares for an extraordinary third term as China’s president later this year, he would not want to be seen as weak in his response to such a move.

“If the US insists on going its own way and challenging China’s bottom line, it will surely be met with forceful responses,” said Zhao Lijian, the Chinese foreign ministry’s spokesperson. “All ensuing consequences shall be borne by the US.”

Thursday’s call began at 8.33am EDT (1333 BST) and lasted two hours and 17 minutes. China’s spokesperson, Hua Chunying, described the exchange as “candid”. It is the two leaders’ fifth conversation since February 2021, when Biden became US president.

During the call, Xi said Washington’s definition of Beijing as its primary rival and most serious long-term challenge was “misperceiving China-US relations and misreading China’s development, and would mislead the people of the two countries and the international community”, according to Hua.

Chinese state media said Xi told Biden the US should abide by the “one-China principle” – which the US calls the “one-China policy” – and stressed that China firmly opposed Taiwanese independence and interference of external forces.

Yet, although Taiwan has dominated the headlines of late, the leaders also spoke about other issues. Tensions surrounding the South China Sea, for example, were high on the list raised by Biden during the call.

The two leaders also discussed Russia’s invasion of Ukraine and bilateral trade, global supply chains, and the ongoing food and energy crises, according to the Chinese statement. Biden previously said he was still considering lifting some of the tariffs on Chinese imports in an attempt to ease the domestic cost of living crisis.

No big announcement was made immediately after the call. The US said the two leaders had tasked their teams to follow up on their conversation, in particular to address climate change and health security.

The Biden administration has been debating whether to lift some tariffs on Chinese goods as a way to ease soaring inflation, but US officials said a decision was not expected before the call.

When Biden last spoke to Xi in March, he warned of “consequences” if Beijing gave material support for Russia’s war, and the US government believes that red line has not been crossed in the months since.

As a co-equal branch of government, the US executive has little control over congressional travel. China has grown more powerful militarily and economically since Gingrich’s visit in 1997 and some analysts worry such a trip by Pelosi at a time of fraught ties could spur a crisis across the 100 mile (160km)-wide Taiwan strait.

Ali Wyne, a senior analyst at Eurasia Group and the author of America’s Great-Power Opportunity, said the two leaders’ call would at least serve to reinforce the imperative of avoiding miscalculations over Taiwan.

He said: “The consequences of a military confrontation between Washington and Beijing would be that much more devastating against the backdrop of a grinding war in eastern Europe and a fragile recovery from the coronavirus pandemic.”

Reuters contributed to this report