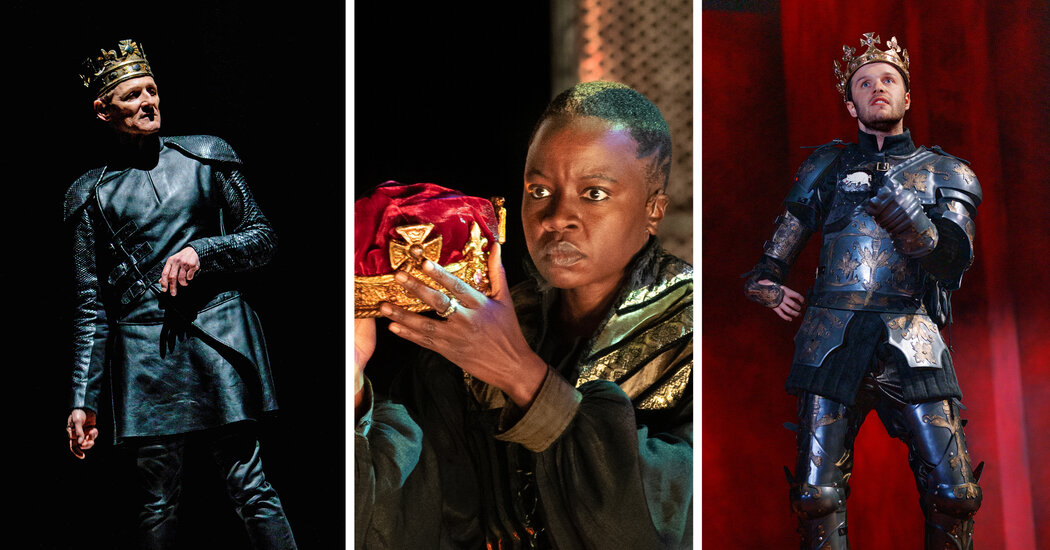 When three of the most prestigious Shakespeare companies in the world staged “Richard III” this summer, each took a different approach to casting its scheming title character in ways that illuminate the fraught debate over which actors should play which roles.

At the Royal Shakespeare Company in Stratford-upon-Avon, England, Richard was played by the actor Arthur Hughes, who has radial dysplasia, which means he has a shorter right arm and a missing thumb. The company said it was the first time it had cast a disabled actor to play the character, who describes himself in the opening scene as “deformed.” The production’s director, Gregory Doran, who was until recently the Royal Shakespeare’s artistic director, told The Times of London earlier this year that having actors pretend to be disabled to play “Richard III” would “probably not be acceptable” these days.

The Stratford Festival in Ontario, Canada, took a different tack: It cast Colm Feore, who is not disabled, to play a Richard who has a deformed spine but who is not a hunchback. And in New York City, the Public Theater’s Free Shakespeare in the Park went in yet another direction, casting Danai Gurira, a Black woman who does not have a disability, as the duke who schemes and kills his way to the throne of England.

Their varying approaches came at a moment when an intense rethinking of the cultural norms around identity, representation, diversity, opportunity, imagination and artistic license have led to impassioned debates, and battles, over casting.

It has been decades since major theaters have had white actors play Othello in blackface, and, after years of criticism, performances by white actors playing caricatured Asian roles are growing rarer in theater and film, and are being rethought in opera and ballet.

Now there are questions about who should play gay characters (Tom Hanks recently told The New York Times Magazine that today he would, rightly, not be cast as a gay attorney dying of AIDS, as he was in his Academy Award-winning role in the 1993 film “Philadelphia”) or transgender characters (Eddie Redmayne said last year that it had been a “mistake” to play a trans character in 2015’s “The Danish Girl”) or characters of different ethnicities and religions. (Bradley Cooper faced criticism this year for using a prosthetic nose to play the Jewish conductor Leonard Bernstein in a forthcoming biopic.)

While many celebrate the move away from old, sometimes stereotyped portrayals and the new opportunities belatedly being given to actors from a diverse array of backgrounds, others worry that the current insistence on literalism and authenticity can be too constraining. Acting, after all, is the art of pretending to be someone you are not.

“The essential nature of art is freedom,” said the Oscar-winning actor F. Murray Abraham, whose many credits include Shylock, the Jewish moneylender of Shakespeare’s “The Merchant of Venice,” though Mr. Abraham is not Jewish. “Once we impose any kind of control over it, it’s no longer free.”

And while the recent insistence on more authentic casting promises greater diversity in some respects, it threatens less in others — coming as many women and actors of color are getting more opportunities to play some of the greatest, meatiest roles in the repertory, regardless of whatever race or gender or background the playwrights may have initially envisioned.

More About on Deaf Culture

Sometimes such casting is considered “colorblind,” in which case audiences are asked to look beyond an actor’s race or ethnicity, or other features. But in recent years the trend has been toward “color-conscious” casting, in which an actor’s race, ethnicity or identity becomes part of the production, and a feature of the character being portrayed.

Some of the varied approaches were underscored by this summer’s productions of “Richard III,” and the different directions each theater took when choosing an actor to play Richard.

Richard tells the audience in the opening scene that he is:

Deformed, unfinish’d, sent before my time
Into this breathing world, scarce half made up,
And that so lamely and unfashionable
That dogs bark at me as I halt by them

The remark by Mr. Doran, the director of the Royal Shakespeare Company production, that it would “probably not be acceptable” these days to have actors pretend to be disabled to play Richard caused a stir in theater circles.

Not only is Mr. Doran a renowned Shakespearean, but his husband, Antony Sher, who died last year, was one of the most memorable Richards of recent decades, using crutches in an acclaimed 1984 production and writing a book about his portrayal.

Mr. Doran, whose production in Stratford-upon-Avon was critically lauded, later clarified his thinking about its casting, explaining that while any actor might be a successful Richard, he believed the role should be reserved for disabled actors until they “have the opportunities across the board now more widely afforded to other actors.”

The new staging in Stratford, Ontario, featuring Mr. Feore, listed a “disability consultant” in its credits. His depiction was inspired by the discovery of Richard’s bones nearly a decade ago — the skeleton suggested a form of scoliosis — and rested on the idea that his physique “was less of a medical disability than a social and cultural one,” the company’s spokeswoman, Ann Swerdfager, said in an email. The critic Karen Fricker wrote in The Toronto Star: “As much as I admired Feore’s performance, it did lead me to wonder if this will be the last able-bodied actor making a star turn as a disabled character on the Stratford stage, given crucial conversations currently happening around deaf and disability performance.”

And in New York, Ms. Gurira, who has appeared in “Black Panther” and the television series “The Walking Dead,” tried to explore the underlying reasons for Richard’s behavior. “There is a psychological reason for what he becomes,” she said in an interview. “He’s looking at the rules in front of him, and he feels he’s most capable, but the rules disallow him from manifesting his full capability.”

The production’s director, Robert O’Hara, said that they made Richard’s difference key to the interpretation. “Richard’s otherness becomes an entire reason for his behavior,” he said in an interview. “He feels like now he has to play a part people projected onto him.”

The rest of the cast for the production, which ended its run earlier this month, was notably diverse, and included several actors with disabilities in roles that are not usually cast that way. Ali Stroker, a Tony-winning actress who uses a wheelchair, played Lady Anne; Monique Holt, who is Deaf, played Richard’s mother, the two typically communicating onstage via American Sign Language.

Ayanna Thompson, a professor of English at Arizona State University and a Shakespeare scholar in residence at the Public Theater who consulted on its “Richard III,” argued that the growing embrace of color-conscious casting reflected contemporary understandings of how different attributes inflect both actors’ identities and audiences’ perceptions.

“All of our bodies carry meaning on stage, whether or not we want to acknowledge that. And that’s going to affect storytelling,” Ms. Thompson said.

Many productions upend traditional casting to interrogate classics. Women played every role in a trilogy of acclaimed Shakespeare productions directed by Phyllida Lloyd at Donmar Warehouse in London, seen in New York at St. Ann’s Warehouse. A “Julius Caesar” directed by Mr. Doran reset the scene from ancient Rome to modern Africa. Even Hollywood has reimagined some blockbusters, as with the gender-swapped 2016 “Ghostbusters.”

But as there is a push for greater casting freedoms in some areas, there is an argument for more literalism in others, especially from actors with certain backgrounds who lack opportunities.

Some disabled actors are upset when they see Richard III, one of the juiciest disabled characters in the canon, go to someone else. “We all want a level playing field where everybody can play everybody,” said Mat Fraser, an English actor who is disabled and has played Richard, “but my entire career I’ve not been allowed to play hardly anybody.”

In 2016, while accepting an Emmy for his turn as a transgender character in “Transparent,” Jeffrey Tambor said that he hoped to be “the last cisgender male to play a transgender female.” Now, with a “Transparent” stage musical being created in Los Angeles, its creator, Joey Soloway, vowed in an interview: “No trans person should be played by a cis person. Zero tolerance.”

The conversation on casting has been evolving in recent years.

“It used to be that part of the measurement of greatness was your ability to transform yourself,” said Isaac Butler, the author of “The Method: How the Twentieth Century Learned to Act,” a new history of Method acting. “Is versatility still the hallmark of good acting? And how do you approach it if there are certain identity lines you cannot cross? And which are those identity lines?”

Gregg Mozgala, an actor with cerebral palsy, has played roles that are not traditionally portrayed as disabled, as he did playing two monarchs in “Richard III” in New York, and sometimes plays characters written as having cerebral palsy, as he will this fall in a Broadway production of the Pulitzer Prize-winning play “Cost of Living.”

“I spent years trying to pretend my disability didn’t exist in life and onstage, which is ridiculous, because it does,” Mr. Mozgala said.

“Every character I ever play is going to have cerebral palsy — there’s nothing I can do about that,” he added. “I have to bring my full humanity to every character I play.”

Some still hold out hope for a day when identity will recede in the conversation.

“A hundred years from now, do I hope white actors could play Othello?” said Oskar Eustis, the Public Theater’s artistic director. “Sure, because it would mean racism wasn’t the explosive issue it is now.”