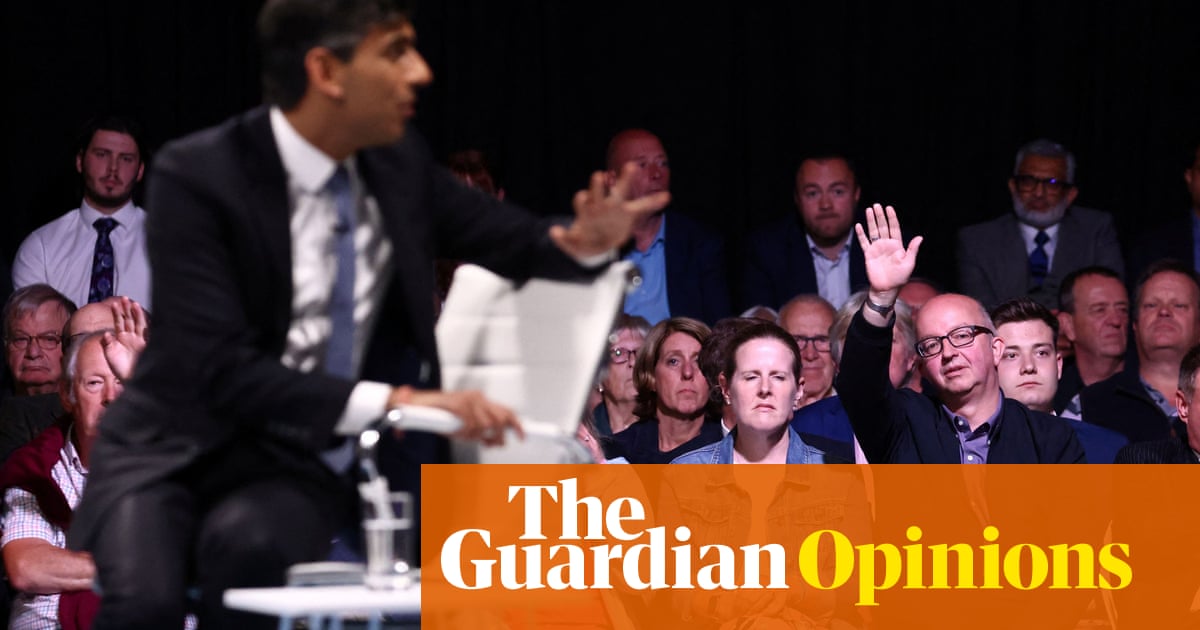 Welcome back my friends to the Show that Never Ends. The Tory leadership contest is only just in its third week but it already feels interminable. Timeless even. As if it’s almost impossible to imagine life without it. First we had a series of unedifying debates in which Liz Truss and Rishi Sunak – with occasional contributions from three other, long-since archived, contenders – picked fights and traded fantasies with one another.

Now we have entered a fresh circle of hell. Twelve hustings where Radon Liz and Rish! each face an hour’s worth of questions from party members, one after the other. So we don’t even get the pleasure of seeing them disagree with each other. Rather they do battle to feed the delusions of the 160,000 or so Tory members who are the only voters that count for this particular election with ever more far-fetched rightwing policies. If you can call them that.

We began with an event hosted by LBC’s Nick Ferrari in front of an audience of 1,400 at the Centenary Pavilion, opposite the football ground in Leeds. Not more than a long stone’s throw from the Roundhay school where Truss grew up in grinding middle-class poverty. Fed on a diet of beetroot quiche. It’s a wonder she can now read and write. Let alone that the school failed her so badly she went on to do PPE at Oxford.

Just like Rish! Fancy that. His only connection with Leeds is that his constituency is in the same county. So he knows all about the hassle of trying to get planning permission for a tennis court, swimming pool and gym. Just one of the hardships of being worth three-quarters of a billion. He feels the country’s pain.

Or not. It was Rish! who won the coin toss and got to go first in making his 10 minute opening pitch from a platform in the centre of the auditorium. He did so without notes, but came across like an empty vessel. Davos man, full of slick superficiality. Completely oblivious to the fact he had been in government and was responsible for the dire straits in which the country found itself.

“I’m having the time of my life,” Sunak began. Well, that’s nice. Because millions of people are struggling with the cost of living and using food banks. But as long as Rish! was having a good time, all was well. He went on to make a joke about his skin colour that died on its feet. Thank you and good night. He’ll be here all week. Sadly for us he’ll be here for the next five weeks. Though that gag should be dumped from his next eleven gigs.

We then got the imaginary backstory about how his parents hadn’t had two Mogadon to rub together at their Southampton pharmacy. But he loved this country for what it had given him. Which is why he wanted to stop other refugees getting here. Rish! had done his homework on the priorities of the Tory members. He ended by talking about honesty – he couldn’t explain why it had taken him so long to realise that Boris Johnson was pathologically unable to tell the truth – and the need to rebuild the economy and reunite the country. He said this with no sense of irony. Or responsibility. Time and again he paused for applause that never came.

Radon Liz also spoke spontaneously without a script. Or as spontaneous as a late 90s computer with obsolete software can manage. Often she seemed to stop mid-sentence. Not because she couldn’t remember how it was meant to end: but because she seemed to think she had already finished. It made for a staccato 10 minutes. Not that the audience seemed to mind as Truss did a whirlwind tour of name checks. Her time as a local councillor. Northern powerhouse rail. Don Revie. Standing up to Putin. Anti-wokery. All got applause. She may be awkward but she had done her homework.

After a short interval, Rish! reappeared. This time to be interviewed for 15 minutes by Ferrari and the audience. The LBC presenter didn’t pull his punches, but Sunak was well prepped. Up to a point. His panicked U-turn promise to reduce VAT on fuel bills that was un-Conservative last week was now a well-considered, time-limited policy. Hmm.

Margaret Thatcher would have done exactly what he was doing. They might as well be soul siblings. Hmm. He hadn’t stabbed Boris in the back. He had been totally cool about Boris lying about parties and ignoring allegations of sexual assault, he had just had a difference of opinion on the direction of the economy. Hmm. He even voiced his enthusiasm for grammar schools. Yes, it was that bad. The applause was almost audible at times.

Things didn’t much improve when Truss got her turn under the spotlight. She claimed that she was public enemy No 1 of President Putin – apparently she is the most feared woman in the world – and she too insisted she was a blood sister of Maggie. After that, everyone seemed to tune out rather. It was all just a wee bit flat. Dull, even. But for all her weirdness, Radon Liz was the one who charmed the audience most. Imagine that.

Rish! must be in despair. The boy with the golden touch to whom life has effortlessly bestowed anything on which he sets his heart, is going to be denied. The Tory members have spoken and they just don’t like him or trust him enough. And the rest of us will be lumbered with Radon Liz as prime minister. There is no coming back from the hubristic road to perdition. We can only forget our patriotism and succumb to satire. Sit back and enjoy the ride. So we beat on, boats against the current, borne back ceaselessly into the past.