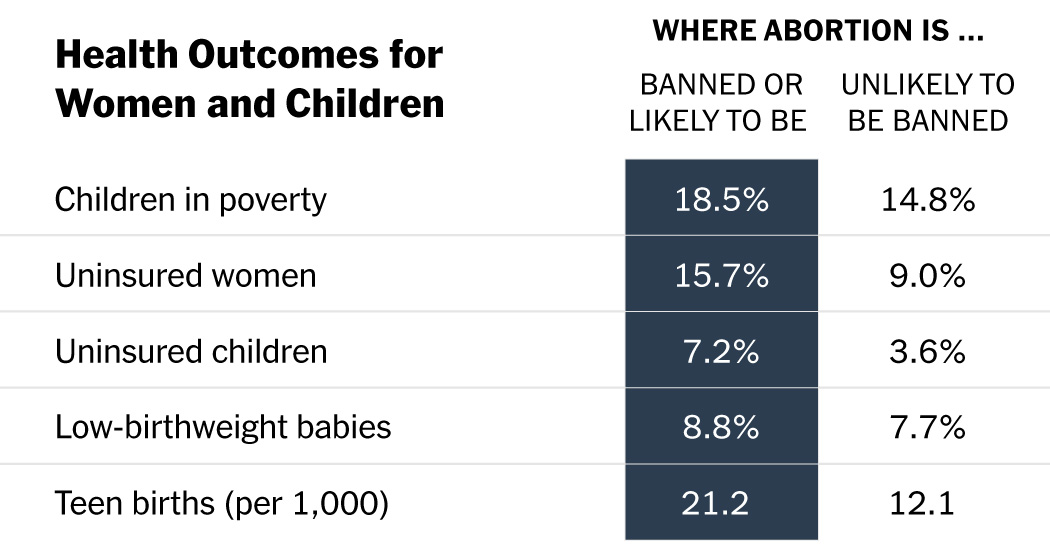 In Mississippi, which brought the abortion case that ended Roe v. Wade before the Supreme Court, Gov. Tate Reeves vowed that the state would now “take every step necessary to support mothers and children.”

Today, however, Mississippi fares poorly on just about any measure of that goal. Its infant and maternal mortality rates are among the worst in the nation.

State leaders have rejected the Affordable Care Act’s Medicaid expansion, leaving an estimated 43,000 women of reproductive age without health insurance. They have chosen not to extend Medicaid to women for a full year after giving birth. And they have a welfare program that gives some of the country’s least generous cash assistance — a maximum of $260 a month for a poor mother raising two children.

Mississippi embodies a national pattern: States that have banned abortion, or are expected to, have among the nation’s weakest social services for women and children, and have higher rates of death for infants and mothers.

According to a New York Times analysis, the 24 states that have banned abortion (or probably will) fare worse on a broad range of outcomes than states where abortion will probably remain legal, including child and maternal mortality, teenage birthrates and the share of women and children who are uninsured. The states likely to ban abortion either have laws predating Roe that ban abortion; have recently passed stringent restrictions; or have legislatures that are actively considering new bans.

The majority of these states have turned down the yearlong Medicaid postpartum extension. Nine have declined the Affordable Care Act’s Medicaid expansion, which provides health care to the poor. None offer new parents paid leave from work to care for their newborns.

“The safety net is woefully inadequate,” said Carol Burnett, who works with poor and single mothers as executive director of the Mississippi Low-Income Child Care Initiative, a nonprofit. “All of these demonstrated state-level obstacles prevent moms from getting the help they need, the health care they need, the child care they need.”

Many anti-abortion activists have acknowledged that improving the health and livelihoods of mothers and young children is an important goal for their movement: “This has been my lecture to the pro-life movement for the last year,” said Kristan Hawkins, the president of Students for Life. “No woman stands alone in the post-Roe America.”

The Issue of Abortion Around the World

An evolving landscape. Women’s access to abortion continues to be debated around the globe. Here’s a look at the state of affairs in some countries:

Thailand. The Thai Parliament voted in 2021 to make abortion legal in the first trimester, while keeping penalties in place for women who undergo it later in their pregnancies. Advocates say the measure doesn’t go far enough.

But in many of these states, skepticism of government aid runs as deep as opposition to abortion. And racism has played a role over generations in weakening safety nets for all poor residents, researchers and historians say.

Studies have repeatedly found that states where the safety net is less generous and harder to access tend to be those with relatively more Black residents. That has further implications for Black women, who have a maternal mortality rate nationally that is nearly three times that of white women.

Social spending is not the only answer to poverty and poor public health, and some in the anti-abortion movement stress that they want to help women and children — just not with more government spending. But there is a strong link between state policy choices and outcomes for mothers and children, researchers have found.

Perhaps the clearest example is health insurance. Numerous studies have tied it to improved health and financial security for poor Americans. Since 2014, states have had the option to expand their Medicaid programs to cover nearly all poor adults, with the federal government paying 90 percent or more of the cost. But nine of the states planning to ban abortion have not expanded it, citing opposition to Obamacare, which Republicans have long vowed to repeal; a disinclination to offer health benefits to poor Americans who do not work; or concerns about the 10 percent of the bill left to state governments to finance.

“Closing the Medicaid gap is the first and best option for women’s health care,” said Allison Orris, a senior fellow focused on health policy at the left-leaning Center on Budget and Policy Priorities.

Since 2021, states have also had the choice to expand Medicaid to cover women for a full year after a birth instead of two months. Just 16 states have declined to do so or opted for a shorter period — all but three of them are also banning or seeking to ban abortion.

Women who are poor and pregnant are eligible for Medicaid across the country, and the program pays for four in 10 births nationwide. But health experts say it also matters that women are covered for an extended period after birth, and for the years leading up to pregnancy. Conditions like diabetes, cardiovascular disease and substance abuse can lead to pregnancy complications and poor infant health. Research suggests that Medicaid expansion can reduce maternal mortality. Medicaid also pays for contraception.

Paid family leave and subsidized child care are another example. None of the states that have banned abortion (or are likely to) guarantee parents paid leave from work to care for and bond with their newborns. Just 11 states and the District of Columbia do. Paid leave has been shown to benefit infants’ health and mothers’ physical and mental health as well as their economic prospects.

In most states, there is no guaranteed child care for children until they enter kindergarten at age 5. Subsidies available to low-income families cover a small segment of eligible children, ranging from less than 4 percent in Arkansas (which now bans abortion) to more than 17 percent in Vermont (which passed abortion rights legislation).

In many states, the subsidies also present a conundrum: Parents are required to work to get them, yet they can’t find or start work without child care. Some states add other obstacles. Mississippi requires single mothers to file for child support from fathers before they can receive subsidies. Also, a job paying minimum wage — which is not higher than the federal floor of $7.25 in 20 states — doesn’t necessarily pay enough to cover even subsidized care.

Support for families is different in some states once children are 3 or 4. Thirteen states and the District of Columbia offer or have committed to offering universal preschool. Unlike with other family benefits, anti-abortion states are roughly as likely as other states to offer public preschool. Six of those 13 states ban abortion or probably will.

“This is consistent with a view that education is a public responsibility,” said Steven Barnett, senior co-director of the National Institute for Early Education Research at Rutgers, while other safety-net programs “fall outside the accepted sphere of public responsibility in the conservative states.”

Poorer states may have fewer resources to fund benefits like parental leave, or state supplements to the federal earned-income tax credit. But what they choose to do with federal grants can be revealing, said Zachary Parolin, a professor of social policy at Bocconi University in Milan who has studied how states use the broad discretion given to them by the Temporary Assistance for Needy Families welfare program.

“You can’t say Alabama gives very little cash assistance for low-income families with children because it can’t afford” the program, Mr. Parolin said. “It has a TANF program, and it’s primarily funded by the federal government.”

But in 2020, Alabama spent only about 8 percent of its welfare funds on direct cash assistance to families. Mississippi spent 5 percent. Instead, states often spend these grants on a wide range of other programs like pro-marriage advertising campaigns and abstinence-only sex education (in 2020, a state auditor in Mississippi found that the state misspent millions of federal welfare dollars, including on speeches that were never delivered by the former quarterback Brett Favre).

Mr. Parolin’s research has shown that states with larger Black population shares tend to spend the least on cash assistance, widening the poverty gap in America between Black and white children. The Times analysis similarly found that states likely to ban abortion devote a smaller share of welfare funds to basic assistance.

States with less generous safety-net programs also frequently use complex rules and paperwork to further limit access to benefits, said Sarah Bruch, a professor of social policy and sociology at the University of Delaware. States could help women and families, she said, not just by investing more in the safety net, but also by making it easier to find and use.

Angela Rachidi, a senior fellow studying poverty and safety-net programs at the right-leaning American Enterprise Institute, said the government has some role to play, but not alone: “We have a broader responsibility as a society — employers, churches, community organizations — to ensure moms feel they can bring those kids into the world.”

Evidence so far suggests that those organizations will struggle to meet the growing need.

After the Supreme Court decision, other governors banning abortion trumpeted their commitment to pregnant women and children. “Being pro-life entails more than being ‘pro-birth,’” wrote J. Kevin Stitt, the governor of Oklahoma, in an executive order signed July 11.

Oklahoma ranks among the bottom 10 states on measures of child poverty, infant mortality and the share of women of reproductive age without health insurance.

In Texas, Gov. Greg Abbott said in a statement that the state has “prioritized supporting women’s health care and expectant mothers in need.”

He pointed to Texas’ decision to offer mothers six months of postpartum Medicaid coverage. But the state declined the full year of coverage offered by the federal government. Texas has also used techniques to purge children from Medicaid coverage for paperwork lapses. It has a higher rate of uninsured children and women of reproductive age than any other state.

In its legislation restricting abortion, Texas set aside $100 million over two years for a program that connects women with counseling, education and supplies, called Alternatives to Abortion. That funding pales in comparison with another benefit, which Texas has declined — the estimated $6 billion in federal funds each year that it’s losing by choosing not to expand Medicaid.