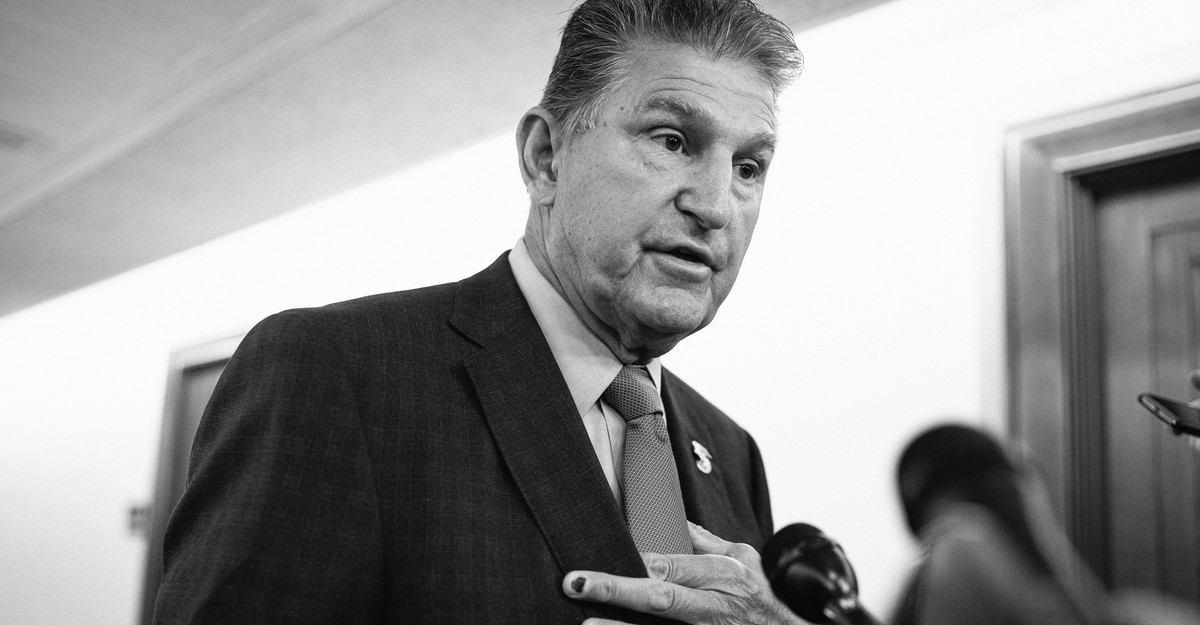 Every few years, American politics astonishes you. Yesterday was one of those days.

In the late afternoon, Senator Joe Manchin announced that he had reached a compromise with Senate Majority Leader Chuck Schumer over President Joe Biden’s long-ailing legislative agenda. In a move that seemed to shock almost all of their colleagues, the two men unveiled a nearly completed bill that will reduce the federal budget deficit, reduce greenhouse-gas pollution, invest in new energy infrastructure, and lower health-care costs.

By 8:30 p.m., the complete text of a bill that nobody had known about four hours earlier had been released. The Senate is aiming to vote on it next week.

The most popular parts of the bill will likely be everything that doesn’t have to do with climate change. The proposal allows Medicare to negotiate the cost of prescription drug prices, for instance, potentially lowering drug costs for seniors. It extends the current subsidies for Affordable Care Act insurance plans to 2025, meaning that they will stay on the books at least through the next presidential election. The bill also salvages Treasury Secretary Janet Yellen’s global minimum-tax deal, meant to keep large companies from location-shopping in order to keep their tax burden low.

But on climate and energy in particular, the bill is a landmark. It authorizes $369 billion of new climate spending, the largest investment in emissions reduction in American history—and, more important, the biggest blow against climate change ever struck by the U.S. government. “This is it. This is the real victory,” Sam Ricketts, a co-founder of Evergreen Action, a climate think-tank, and a former adviser to Governor Jay Inslee of Washington State, told me. “I struggle to find enough superlatives to describe this deal.”

The legislation is so big, so multifaceted, that I don’t think it’s possible to summarize in this narrow space. But I will hit a few highlights that are crucial to understanding how the bill’s energy provisions work and what they could mean for the country and the world:

The core of the bill is a set of tax credits that could touch nearly every aspect of the energy economy.

The bill’s main tool, its proverbial bludgeon, is a new set of tax credits that could remake the way America generates electricity.

To understand why they’re important, remember that, for the past decade, the U.S. has encouraged the growth of wind and solar through a particularly kludgy set of tax credits. For instance, a developer could get a tax break by investing in, but not producing, solar power. And if Congress wanted to increase the market share of any new zero-carbon form of power generation, it had to pass a new law creating a tax credit for that specific technology. Because of the way these tax credits were structured, they typically had to run through a large bank or investment firm, and they couldn’t be used at all by a publicly owned utility or nonprofit.

However tedious this approach was, it worked. It helped drive massive declines in the cost of wind and solar power and cut carbon pollution from the U.S. power sector 40 percent below its all-time high.

The new bill will significantly broaden the scope of these incentives, replacing them with technology-neutral tax credits that can be used for any low- or zero-carbon form of power generation. At the outset of a project, developers can make a choice: Either they can take the new investment tax credit, which will cover 30 percent of the cost of their project, or they can take the new production tax credit, which will pay them for every kilowatt-hour of zero-carbon electricity that they generate.

When economists at the University of Chicago and the Rhodium Group analyzed an earlier version of this proposal last year, they found that these technology-neutral tax credits were strikingly efficient, creating $1.5 trillion in economic surplus while eliminating more than 5 billion tons of carbon pollution. The tax credits had a benefit-to-cost ratio of about 3 to 1, Michael Greenstone, the Milton Friedman Distinguished Service Professor in Economics at the University of Chicago, told me. “It’s very rare that we get opportunities to have policies with a benefit-to-cost ratio of 3 or 4 to 1. Normally it’s, like, 1.3 to 1, and we economists get very excited,” he said.

The bill will transform electric-vehicle sales.

Among the tax credits is a new $7,500 rebate for new EV purchases. This is quite a big deal: Transportation is the most carbon-intensive sector of the U.S. economy, and privately owned cars and light trucks—that is, normal family vehicles—produce 15 percent of the country’s carbon pollution. The $7,500 subsidy phases out as buyers’ income level increases—it goes to zero at $150,000 for single filers, $300,000 for couples—and it will subsidize the cost of expensive SUVs, pickups, and vans more than it will the cost of sedans and coupes. Importantly, the new tax credit will encourage the manufacture of cars and their constituent parts in North America.

It will also change how Americans heat, cool, and power their home.

The bill includes 10 years of subsidies for households to buy heat pumps, electric water heaters, and rooftop solar panels. That’s separate from the $10 billion in funding for low-income Americans to increase their home’s energy efficiency and electrify key appliances.

The bill contains a slew of programs to decarbonize heavy industry.

U.S. industry is poised to become the country’s most carbon-polluting sector by the end of the decade. The bill’s tax credits and incentives will help nurture domestic clean-hydrogen, direct-air-capture, and advanced-nuclear industries. While the bipartisan infrastructure law, passed last year, included tens of billions to fund one-off demonstration projects for these technologies, this bill provides longer-term tax credits meant to help these industries scale into full-size businesses.

It also invests in the old, polluting fossil-fuel system.

The bill seems to include two sets of provisions that environmentalists are likely to despise, and that could send American emissions in the wrong direction. The first is a requirement that the government open up new locations for oil and gas leasing in Alaska and the Gulf of Mexico. The second is that it de facto requires the White House to open an acre of seafloor for offshore oil drilling whenever it opens an acre for offshore wind development. Many advocates knew that this deal would involve some compromise, and there it is.

Schumer will now move to get the bill to Biden’s desk as soon as possible. But the deal is not even a bill yet, nor is it a done, uh, deal. First it has to make it out of the Senate, where it will need the support of every Democratic senator. That will require senators to stop getting COVID, which they have been doing a lot lately, and Senator Patrick Leahy of Vermont—who has been absent since his hip-replacement surgery last month—to make it back into work. Moreover, it will require the support of Senator Kyrsten Sinema of Arizona. The bill seems to include certain tax provisions, namely the “carried interest loophole,” which allows investment advisers to treat a certain portion of their returns as income, that Sinema had previously said she could not support.

Then it must go to the House of Representatives, where it faces another difficult battle, again rooted in its tax provisions. The bill does not cut taxes for high-income earners in New Jersey, New York, and other high-tax blue states as much as Representative Josh Gottheimer of New Jersey had wanted. But if skeptics kill the bill over that alleged failure, they will have nixed a once-in-a-decade chance for Democrats to decarbonize and develop the U.S. economy.

A few weeks ago, when the previous version of the reconciliation bill was still alive, I set out two questions by which any climate legislative effort should be judged: First, would the bill reduce U.S. emissions on net compared with doing nothing at all? (By that point, it seemed likely that Schumer would concede some amount of new fossil-fuel development to Manchin.) And, second, would the bill make global decarbonization more likely? That is, would it help make zero-carbon technologies cheaper, help produce them in abundance, and generally strengthen the political position of those who want to see the world decarbonize?

The bill aces both tests. It will almost certainly slash U.S. emissions on net, even when accounting for the increased carbon pollution from leasing new sites for oil drilling in Alaska and the Gulf of Mexico. And it puts Biden’s ambitious Paris Agreement goal—to cut emissions by 50 percent, compared with their 2005 level, by 2030—back in reach.

Estimates of earlier versions of the bill found that its provisions would get the country 90 percent of the way to meeting that goal, and although the updated version probably does not go that far, Schumer’s office has claimed, in essence, that it can still get the U.S. about 70 percent of the way to meeting Biden’s goal. That will leave a much smaller chunk of emissions for executive action to try to deal with.

“It looks like the estimate from Senator Schumer’s office that this will take U.S. [emissions] to about 40 percent below 2005 levels is accurate,” Jesse Jenkins, a Princeton engineering professor who runs a team that estimates the emissions effects of climate policy, told me in an email. “That’s huge.”

The bill could also set the world back on the right track. Over the past few months, the energy crisis and Russia’s invasion of Ukraine have imperiled global decarbonization by sending countries hunting for any fuel that they can get their hands on, carbon content be damned. Some European countries have even restarted burning coal out of a lack of options. This massive public investment in clean energy should help reduce costs around the world, creating a new energy abundance. It also improves America’s ability to cast itself as a defender of the climate and, in turn, cajole other countries into cutting their own emissions.

In short, the bill “keeps us in the climate fight and makes it possible that executive action, state and local government policies, and private sector leadership can get us across the finish line,” Jenkins said. “Without this bill, we’d be hopelessly far from our climate goals. I very much hope they get this across the finish line and to President Biden’s desk ASAP.”