Rolls-Royce has conceived of its most arduous testing program ever to prepare the Spectre to become its first modern electric vehicle. And now, that means hanging out in the south of France.

There are two good reasons to test its new EV in the French Riviera. The first is called Miramas, a state-of-the-art automotive test center with wind tunnels and handling courses that will put the luxurious sedan through its paces.

The second reason is simply that that’s where a lot of Rolls-Royce‘s customers end up. It only makes sense to test the car in one of the fanciest places on earth, since that’s where it will be used.

Read Also: Rolls Royce Boss Says They Are “Educating” The Electric Spectre “To Think And Behave Like A Rolls Royce”

“This Electric Super Coupé will be the first all-electric super-luxury motor car with continental touring central to its proposition,” writes Rolls-Royce. “The French Riviera and its roads present a perfect combination of the types of conditions that will be demanded from Spectre’s clients, ranging from technical coastal corniches to faster inland carriageways.”

In all, the electric vehicle will be subjected to 2.5 million km (1.5 million miles) of testing because, not only is it the brand’s first modern EV, it is also the most advanced Rolls-Royce ever made. Its intelligent architecture features 141,200 sender-receiver relations, which is three times more than the brand’s typical vehicle.

That allows the central processing unit to be relied upon less, and means that it receives more sophisticated data packets from the car. The result is faster reaction times on the road and a more luxurious ride. Indeed, it has allowed for a brand-new suspension system to be implemented. Following months of testing, the system has finally been approved for the car, and will be refined and perfected during its Riviera test program. 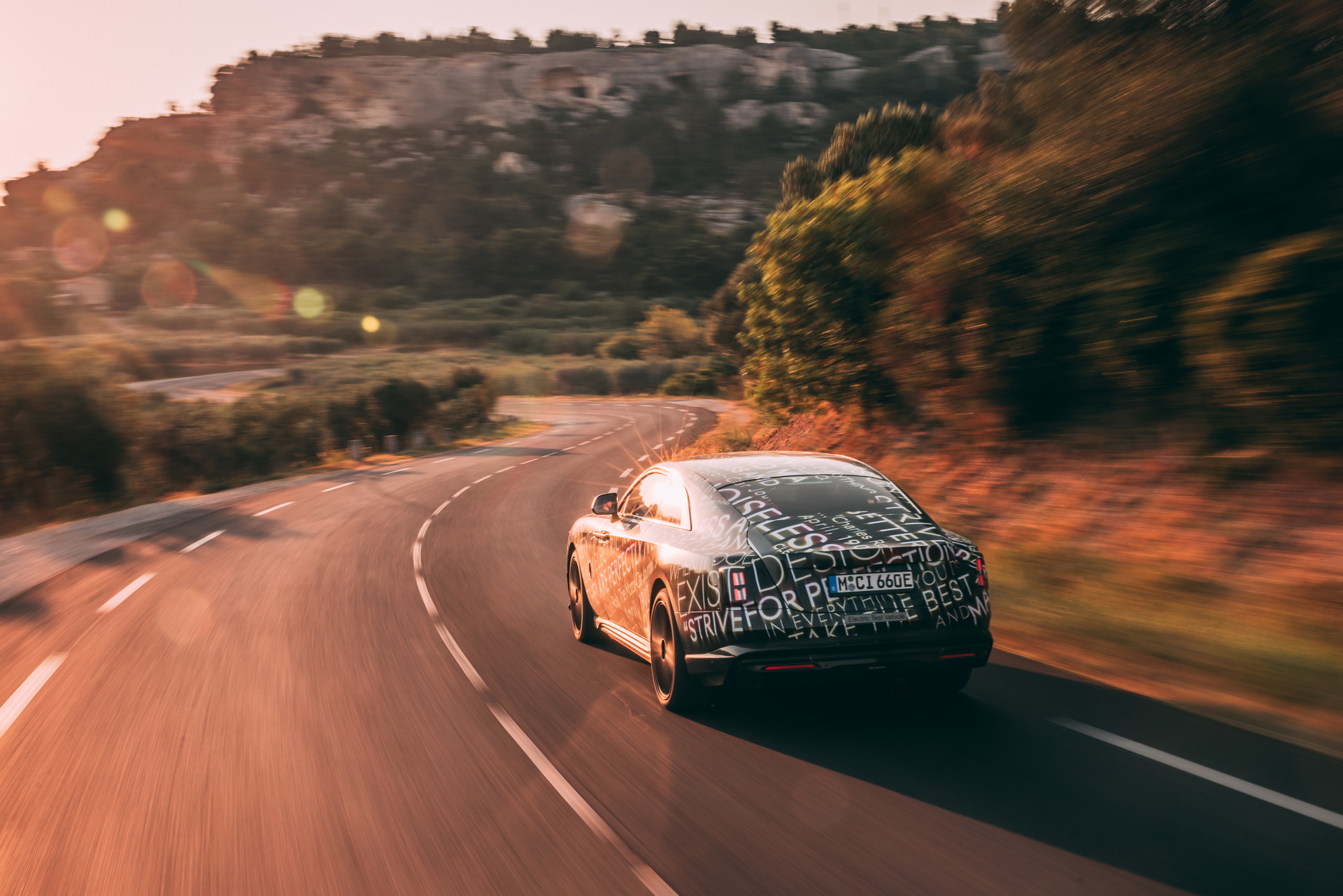 By leveraging the Spectre’s high-speed computing capabilities, its “Flagbearer” system can read everything from the surface ahead to the twists that are coming in the road using the satellite navigation system. With that information, it can automatically decouple the anti-roll bar on straight sections. That means that the car feels less bothered by uneven sections of road. When a turn is coming up, the anti-roll bars are recoupled, the dampers stiffen, and the four-wheel steering system engages to make the corner feel smoother and flatter.

It’s a neat trick, but the Spectre won’t just rely on fancy new electronics to make its ride comfortable. It’s also the stiffest Rolls-Royce to date thanks to its aluminum architecture, which is reinforced with steel sections for better torsional rigidity. The battery pack will also be integrated into the spaceframe, which only adds to the vehicle’s rigidity.

Further helping are the aluminum body sections, which are the largest in Rolls-Royce history. The side panel, for instance, goes from the A-pillar to the taillights and is four meters (13.1 ft) long. The pillarless doors, meanwhile, are about 1.5 meters (4.9 ft) long and are, once again, the longest in the brand’s history.

Already, the brand’s time at Miramas has proven that the Spectre will be even more impressive than Rolls-Royce expected. After designing the car’s coupe body, its aerodynamicists thought the car would have a coefficient of drag of 0.26. Following its time in the wind tunnel, though, they found that the car had a drag coefficient of 0.25.

Expected to complete 625,000 km (388,357 miles) of its 2.5 million km (1.5 million mile) testing program in France, Rolls-Royce engineers will have another million km (621,371 miles) of testing to complete before the car is ready for customer deliveries to begin in the fourth quarter of 2023.