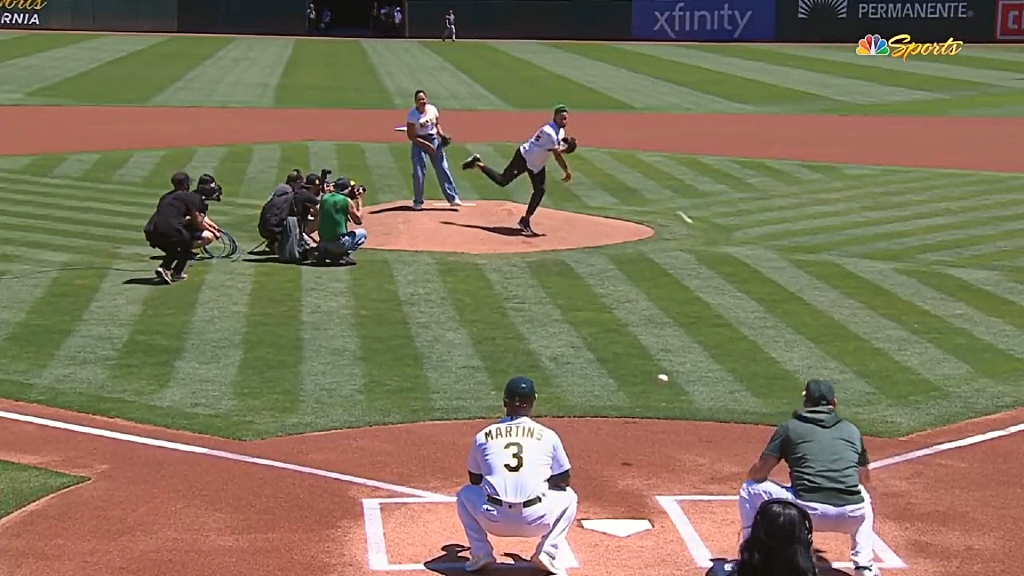 Stephen Curry has had a busy summer, winning his fourth championship with the Golden State Warriors in June and then hosting the ESPYs last month.

On Wednesday afternoon in Oakland, Curry found himself trading basketball for baseball, as he and Ayesha were on hand to promote their Eat. Learn. Play. Foundation. First, Steph took some batting practice prior to the game, and found out the hard way that wood bats aren’t the most forgiving.

Then he and Ayesha took the mound together to throw out the first pitch(es) of the game, with Steph sending his catcher diving to the right (and making a helluva play) after he fired one into the dirt and way outside.

Curry joined the A’s broadcast team in the booth and explained what happened, saying he got in his head about his friends saying he’d throw a terrible first pitch and wanted to “throw some heat” to prove them wrong, only to fulfill the prophecy by dirting one — he also put some of the blame on Ayesha for being too close to him on the mound.

Throwing a first pitch from the side of the mound certainly isn’t easy, but the lesson as always is to never try to do too much on a first pitch. You’re not about to pick up a deal to become a pitcher, so no need to bring the gas, just get it over the plate.